In the past seven months, the world’s media have descended upon the Creation Museum. Mark Looy tells me that we have had over 25 correspondents from European media outlets alone this past year (including 4 reporters from Swiss outlets and many from the UK, as might be expected).

Three Dutch correspondents have been here in 2007. The most recent story filed for a Dutch audience was a three-minute news story that appeared on RTL Television during its prime-time news program, which, we are told, has 1.5 million viewers daily. The show is comparable to America’s evening news broadcasts on CBS, NBC, ABC, and Fox.

Mark’s father grew up in the Netherlands (he actually lived under Nazi occupation in the 1940s), and Mark asked him to summarize the nationally broadcast TV program:

“Not too bad. A lot of ‘they believe that . . . .’ No attempt at ridicule, though their disbelief comes through loud and clear. The closing is out of line, and goes as follows: ‘The founders claim that their purpose is to bring back Christian values. After gay marriages and abortions, they are now taking aim at science.’”

We are puzzled about those last four words. Mark showed the reporter the museum’s science exhibits (fossils, minerals, etc.) and planetarium and told him of the several staff members we have who hold doctorate degrees. Mark told him that we love and study science, but that our researchers just interpret the facts in regard to origins in a different way to the evolutionists.

RTL Dutch Television is part of the RTL group, which is Europe’s largest television network. A network producer told us that it has over 100 million viewers in the UK, France, Germany, and the Netherlands, and that our museum story would be available to the other European affiliates for broadcast (narrated in other languages, of course).

Even though the Dutch correspondent may have been skeptical about the content of the museum, he and his videographer did have some fun while here. See the photo taken by our Foto FX crew inside the museum’s portico. 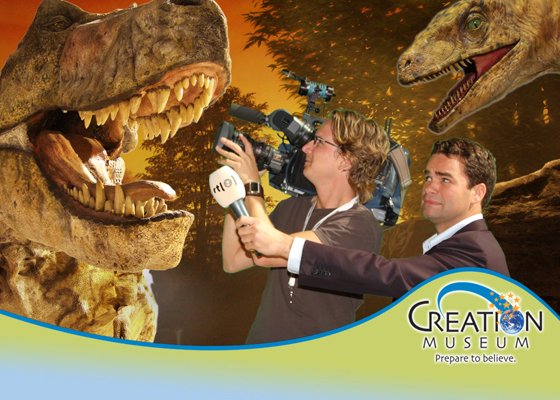