"A steady diet" of AiG materials and souls saved

A STEADY DIET OF AiG MATERIALS AND SOULS SAVED

Testimonies were overflowing in Sugarcreek (in the center of AMISH country in Ohio) Saturday night, where Dr. Tommy Mitchell began an eight-part series for over 200 enthusiastic folks with Noahs Ark and the Global Flood and Jurassic Prank: A Dinosaur Tale. Tommys wife Elizabeth sent this VERY exciting report that includes testimonies of people saved as the Lord uses AiG. Elizabeth shares:

Most exciting of all, a grandfather shared this moving testimony with me: He was raised in a Bible-believing church but, having a Scofield Bible, he learned some wrong information about the age of the earth and dinosaurs. Even as a child, he knew something was wrong, but there was no one to ask who would have had an answer. Since coming to his first Answers in Genesis seminar about three years ago, hes had the answers he needs for himself and others. The others include his own grandchildren, who have come to salvation in Christ through the explanations he has been able to give them and the Answers in Genesis materials he has shown them. (They each now have a subscription to Answers Magazine of their very own!) Others includes a man in his Sunday school class, who came to Christ after a steady diet of Answers in Genesis materials that he passed on to the man piece by piece. The Bible and salvation finally made sense to this adult and these children when explained from the very first verse!

This same gentleman did not know that I was Dr. Tommys wife or even that I worked with Answers in Genesis when he told me that hed watched the God of Suffering? DVD so many times he felt like he knew Dr. Mitchell personally. (He watched it again Friday night to get pumped up for this conference.) But he noticed that, while Dr. Mitchell had to be somewhat subdued in the DVD in view of the subject matter and post-Katrina setting, he was like a different person tonight and a whale of a speaker.

The most heartening testimony of all came when he told me hed given both the God of Suffering DVD and Ken Hams The Bible Explains Dinosaurs DVD to an uncle dying of cancer. (He said he always thinks about Kens comment that creationists who die without Christ go to hell too.) Before he passed away, this elderly cancer patient received Christ as his Saviour. When asked if he feared death, the uncle replied, You dont have to be afraid if youre a believer.

This fine gentleman said that he noticed Dr. Mitchells DVD and his talks this evening truly have the Gospel of salvation presented all through them. Answers in Genesis exists to win lost souls to Jesus Christ by enabling them to see that they can trust the Bible, to understand why they need to be saved, and to show them how Jesus Christ the Son of God fully satisfied their sin-debt on the cross. For I determined not to know any thing among you, save Jesus Christ, and him crucified (I Corinthians 2:2). Jesus said in John 15:16 that we should go and bring forth fruit. Answers in Genesis is thankful to have a part in equipping Christians to fulfil this commission. Yet Jesus also said without me ye can do nothing (John 15:5). We at the ministry covet the prayers of believers, asking that you pray for us as we seek to do the work God has given us to do.

The above is really what the AiG ministry is all aboutseeing souls saved for the Kingdom. Praise the Lord.

Tuesday morning, I had the privilege of speaking to 260 Christian leaders in Washington DC as a lead up to the May AiG conference. I received so many testimoniesone pastor said the lights went on with him, so much so he said "wow" five times!! More resources sold than we expectedthe response was outstanding. This will be a great seminar we believeplease pray for this.

Ive enclosed two interesting photos re the Creation Museum. One is of the famous Archaeopteryx that used to be considered a transitional form between reptiles and birds (though evolutionists have now rejected that idea)our "Archaeopteryx" was sculptured by Buddy Davis! The other photo shows the progress on the outside covered deck for the Café expansion. 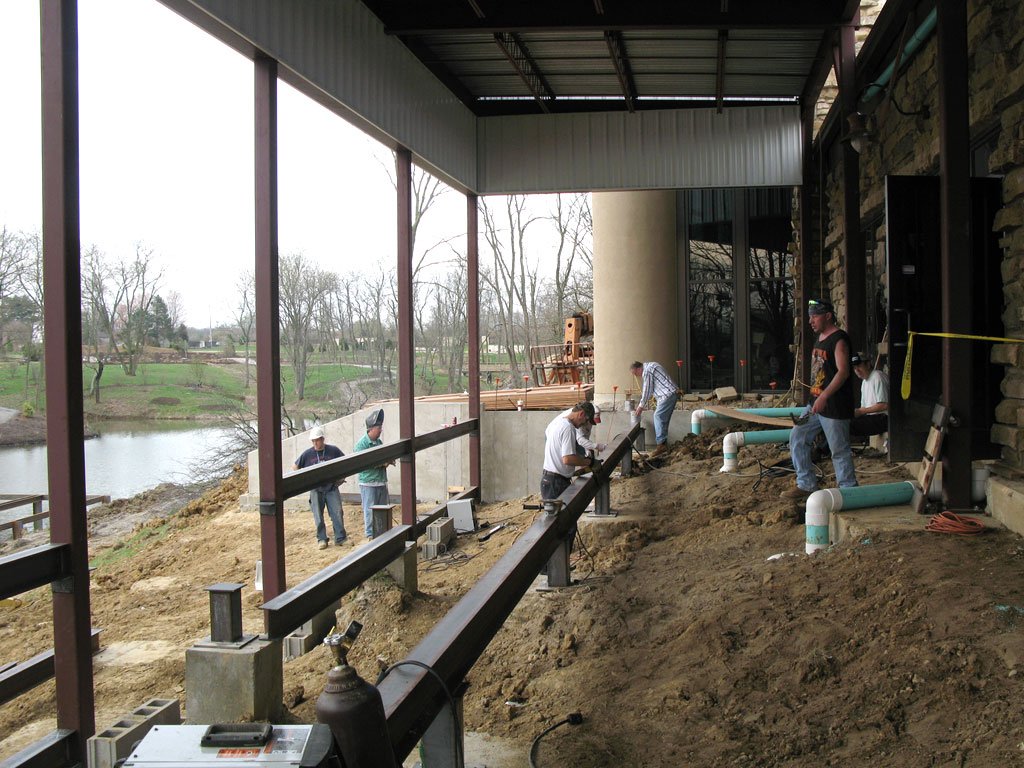