Yep! It's a Fallen World

Well today was an interesting day! I had arranged to take my two brothers, Stephen and David, to lunch at our favorite Seafood Restaurant at Sanctuary Cove. While we were on the way to the restaurant, my brother Stephen called me to say we would have to change the time for lunch as he was going to be late (we eventually had lunch at 3 pm!). This is what happened:

Stephen worked hard so he could have the time off to meet me for lunch. He rushed out of work and drove off only to be stopped by the police for speeding. Then they noticed he didn't have his seatbelt on (he forgot in all the hurry to get going). This cost him $500 in fines and 7 points off his license. Now Stephen was very depressed. He called me and told me it was his own 'stupid fault' and that he would be late. He then turned the key on his car to get going again, and found his car wouldn't start. Then he had to call the RACQ (AAA in America) to jump start his vehicle. The RACQ mechanic told him his battery needed replacing. Stephen got going and arrived at a very busy intersection only to find his car stopped again. He was able to roll the car into a service station (Gas station) and purchase a new battery (which cost $140). He had now blown $640, and he hadn't left town yet to drive to the restaurant (on the coast about 30 minutes south of Brisbane). He called to say he would be very late now. He then collected my brother David (who couldn't stop laughing) and got on the Tollway to save time--only to find roadworks were holding up the traffic. He called again to say they would be even more late! In the meantime, Mally and I sat at the restaurant eating appetizers and waiting patiently as the two brothers finally turned up at 3 pm--just in time to order meals before the restaurant closed. In the attached photograph, my brother Stephen is on the left--it was cold and raining when this photograph was taken. (pretty much sums up his day!) 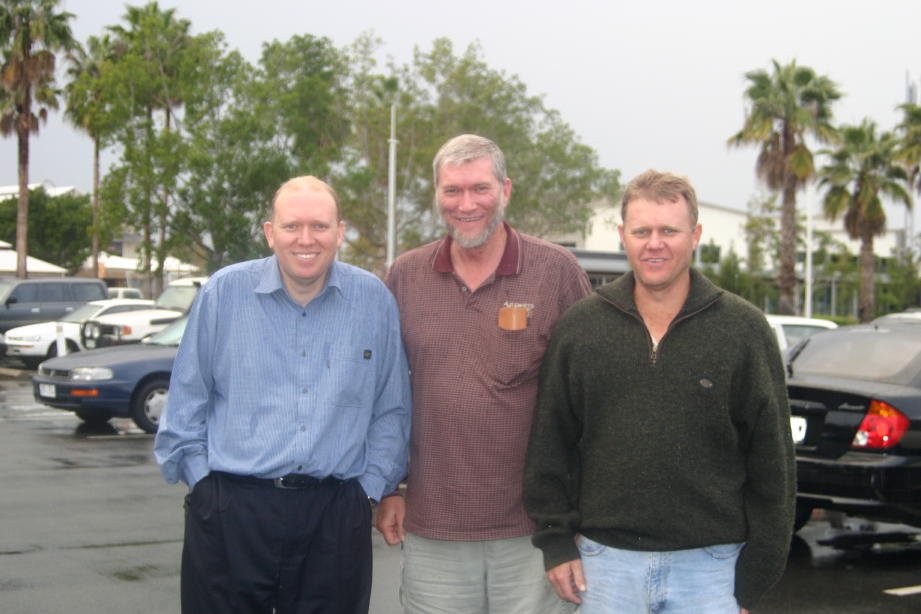 Previous Article Sunday in Australia Next Article Darwin’s house--why is it tumbling down?