Mark Looy is one of the three "founding fathers" of AiG-USA.

Mark and his wife Renee are very proud of their nephew, who with along with a teammate won the national US Rowing championship. Mark sent me the following report, so I thought it would be good to put this on my Blog---it's quite an achievement:

The nephew of Renee and Mark Looy (AiG--USA VP of Outreach), Mark Jelsing, is a national champion. Mark (18) and teammate Erik Farrar of Lake Stevens, Washington, won the national US Rowing championship for junior men's 2X this past weekend. Even though the two rowed into something of a headwind, the team finished the 2,000 meter race in under 7 minutes, quite an accomplishment in itself.

The regatta was held in AiG's Cincinnati, Ohio area, and so the Looys were able to spend a part of an exciting weekend with their nephew and his father, Larry Jelsing, an attorney from Everett, Washington. Mark is a recently graduated homeschooler; he and his sister, Jessie, have used AiG materials in their homeschooling. 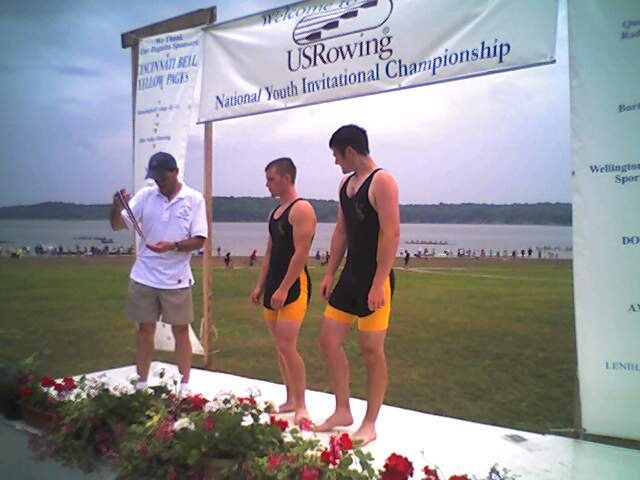 The pictures: Coach Wagner presents first-place medals to Erik and Mark. The race finish picture is courtesy of http://www.racetrak.com

Thanks for stopping by!

Previous Article What Do You Do With Jet Lag? Next Article AiG Thanks Kevin Markesbery