Our team came back to Belsey Bridge today very excited because we had the opportunity to meet several unique and famous people. One group met the Prime Minister of Kenya, and others met the Canadian swimmer who came in eleventh in the world. Another met a former gold medal winner from a few years ago, and several saw and met some Olympic athletes and teams.

Most of these people were given a copy of the booklet “Big Ben—Time,” including the Prime Minister’s wife and the head of security from Kenya.  As we listened to all the reports tonight, we rejoice that God is allowing us to have a spiritual impact in this city and around the world.

Three teens actually passed out 1,000 booklets from a location near Big Ben. Two more folks received Christ as Savior, and several promised to seriously consider becoming a Christian. One person actually filled out the decision card after getting home and took a picture of the card to send to us showing he had checked the box that he had prayed to receive Christ.

Our team has distributed 23,716 booklets, seen 16 people profess salvation, and given the gospel message to people from 91 countries so far. The team has become a wonderful Christian family, and we work together as a well-functioning body for the glory of the Lord.

Ken Ham and Mike Zovath from AiG arrived late this evening and will be traveling with and speaking to the group tomorrow night. 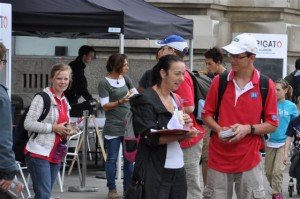 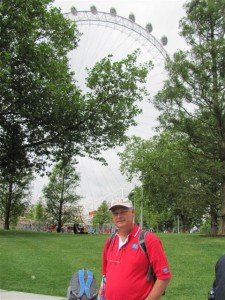 Earl Cooper with London’s Eye in the background 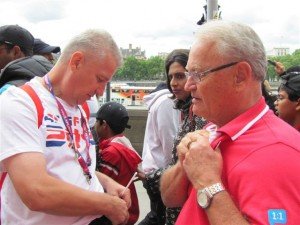 Dr. Crandall swapping his AiG Worldwide pin and handing out a booklet 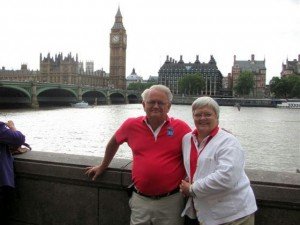