Praying for Revival at True Woman 2012

Last week for three days, 8000+ Christian women met in Indianapolis for the True Woman conference (sponsored by Revive Our Hearts) to learn how to be godly women from God’s Word and to pray for revival in our homes, churches, nation, and world. I enjoyed hearing some great Bible teachers like Nancy Leigh DeMoss and Mary Kassian and the very culturally relevant and no-nonsense presentations given by Janet Parshall. Keith and Kristyn Getty provided spectacular music (their director stopped by our booth and gave me a free CD, which I’m really enjoying!).

My friend Stacia (AiG VBS Director) and I “manned” the booth for AiG and the Creation Museum. Two years ago when I attended True Woman conferences, about 30 to 40 percent of people had never heard of us. This time could not have been more different! I would say less than five percent were unfamiliar with us. The ladies all received 50 percent off admission to the museum in their conference bags, and we hope many will take advantage of it. Hundreds of women signed up for our contest to win an annual family pass to the Creation Museum.

It seemed like there was a constant stream of people at the booth, and we were very busy restocking our give-away items like newsletters, Answers for Kids magazine inserts, and the Already Gone DVD. We brought several resources to sell, and by the end of the conference we had sold out of all our children’s items and all but one copy of How Do We Know the Bible is True? These women were definitely interested in equipping themselves and their children!

Many, many women gave testimonies as to the importance of the Answers in Genesis ministry in their lives. Here are just a few (that I had time to jot down!).

As I thought about the revival theme of the conference and AiG's desire to equip and educate Christians about the authority and truth of God’s Word, I realized how necessary one is for the other. Revival can happen in this nation but only if Christians unashamedly stand on the authority and truth of God’s Word. This is what will truly challenge and change the culture for Christ.

Don’t forget to mark your calendars for the next Answers for Women conference at the Creation Museum, May 3–4, 2013. Husbands and children of women who attend the conference will receive free admission to the Creation Museum! Mary Mohler (wife of Dr. Albert Mohler of Southern Seminary), Steve Ham, and I will be speaking along with others. We moved the conference to a Friday and Saturday to make it easier to attend. Husbands, this makes a great birthday, anniversary, or Christmas gift for your wife! Watch AnswersforWomen.org for more information coming soon. (You can read about our first Answers for Women conference here and here.) 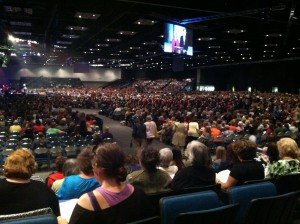 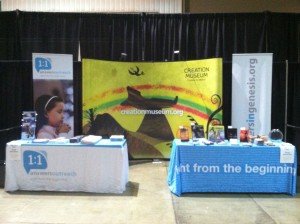 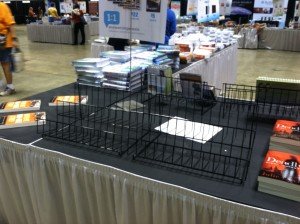 Empty racks at our resource table!

Previous Article ENCODE and the Dark Matter of the Genome, Part One Next Article “A Sweet Smelling Aroma”