Battle of the Billboards

Just as they did in their previous Christmas billboard a few years ago, they have depicted Christianity with supposed “facts” that are simply not true.

A Christian’s basis for believing in Jesus is not His image on a piece of toast. This is truly a mockery of Christianity, making it appear silly. We believe in Jesus because the Bible reveals Him to us. The Scriptures are absolutely sufficient for knowing Him (2 Timothy 3:16-17).

The billboard states that God is sadistic and that Christianity “Promotes Hate, Calls it ‘Love.’” In making these statements the designers of the billboard are inferring a standard of morality by which they can judge God andChristianity. But atheists have no ultimate basis for morality, and whether they realize it or not, they must borrow from a Christian worldview to make this statement against Christianity.

Oh the irony! Only when we use the Bible as the ultimate authority can we say that sadism and hate are bad and that love is good. Otherwise it is just man’s arbitrary opinion.

The phrase “Useless Savior” really struck me as I thought about the many Christians that have compromised on the historical and theological importance of Genesis. If Adam and Eve aren’t real people who sinned in the Garden of Eden, and as a result we are all not sinners, then Jesus Christ’s death on the cross was useless. The American Atheists themselves wrote the following for their Christmas campaign a few years ago:

No Adam and Eve means no need for a savior. It also means that the Bible cannot be trusted as a source of unambiguous, literal truth. It is completely unreliable, because it all begins with a myth, and builds on that as a basis. No Fall of Man means no need for atonement and no need for a redeemer.

Correct! That is why literal truth of Genesis is so important to the authority and truthfulness of Scripture. It is the very foundation of the Gospel.

I’m assuming that the “30,000+ Versions of ‘Truth’” refers to ancient manuscripts of portions of the Bible. We have dealt with the issues of inerrancy, infallibility, and reliability of the Bible many times on our website and in our resources. I refer the reader to this excellent feedback article, “Is the Bible Authoritative and Inerrant?” for more information.

The “tagline” for the billboard is “Atheism: Simply Reasonable.” I would argue that Christianity is “simply reasonable” and that atheism is “simply unreasonable.” Christians’ faith is not blind but reasoned. What we see in the natural world confirms the Bible.

For example, based on the Bible we know there was a global, catastrophic flood (Genesis 6-9), and as a result of that we would expect to see billions of dead things buried in rock layers laid down by water all over the earth. And guess what, that’s exactly what we see in the fossil record!

As Dr. Jason Lisle stated the following in his article “The Ultimate Standard”:

We are pro-reasoning; and we start with the Bible as our standard because any other standard would be irrational. Only God can provide us with a necessarily correct universal standard for knowledge because only God has universal knowledge. Christians have faith that the Bible is what it claims to be: the authoritative Word of God. And because we have such faith, we have a reason for reasoning.

The messages on the atheist billboard are overtly negative against Christianity without really saying anything positive about atheism. It doesn’t inform people what atheism is but rather what it isn’t. Contrast that to our recent billboard campaign for the Creation Museum. 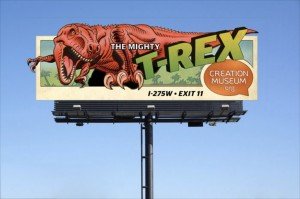 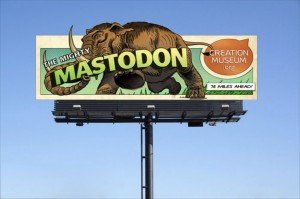 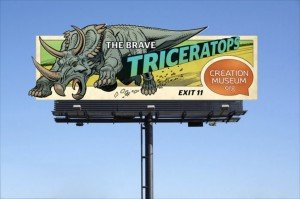 Our billboards are attractive, capture your attention, get our message across very succinctly, and are positive! Praise God for the talented team of people who put together this campaign. Be sure to check out our bookstore for shirts, postcards, journals, etc. based on our billboards. You can be a part of this advertising effort to bring people to the Creation Museum for the glory of God and the gospel of Christ! Also, pray for atheists to come to a saving knowledge of Christ before it is too late.

*Of course some professing Christians put up billboards that attack atheists. While it is important to respond in truth to unbelievers, we must do it with gentleness and respect (1 Peter 3:15).

Previous Article One of Zoe's Last Wishes Next Article Am I a Coward?