In Awe of the Creator in New York

by Dr. Georgia Purdom on May 1, 2012
Share:
Email Using:
Gmail Yahoo! Outlook Other

I spent this past weekend in Farmington, New York, speaking about the wonder and complexity of God’s amazing creation at the “In Awe of Him” conference. I gave presentations on the complexity of microbes (bacteria, etc.) and the cell (in addition to a presentation on the foundational importance of Genesis). About 20 people said they had visited the Creation Museum, and many more told me of their desire to come soon. Calvary Chapel of the Finger Lakes was our host for the event, and they were very accommodating. It seemed like they fed us all day, and I told them I’d probably gain weight as a result of the event!

Pastor Scott Gallatin shared with me that he had heard Ken Ham speak at a pastor’s breakfast about the book Already Gone. He became concerned about how well the students in the school run by the church were being equipped in relation to origins and Genesis. The church and school affirm a literal six-day creation, 6000 years ago and a global flood, and he wants the students to be equipped to defend that belief. He decided to lead an ark feasibility study in the fifth grade class and said he was very encouraged by the student’s enthusiastic response to the project. Praise God for Christian churches and schools that take a stand on the truthfulness and authority of God’s Word and are equipping young people to do the same.

On my flights in and out of New York I had connections in both JFK and LaGuardia airports, and from my view up high I was able to see the Statue of Liberty and the Empire State Building. Someday I hope to see them when I can actually climb to the top!

I won’t be traveling again until the end of May, and I’m glad for the break. I am looking forward to speaking on Mother’s Day at Bethel Assembly of God near Cincinnati. Check out the website for more information and come join us if you’re in the area. 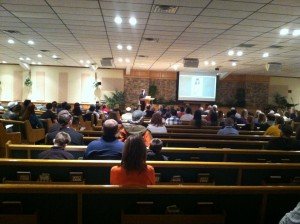 I really liked this picture of me speaking because that is my daughter's picture on the screen. I always try to find a way to put here picture in somewhere!

People were excited about the resources