What Do These Three Things Have in Common—Evolution, Galapagos Islands, and Branson, Missouri?

I’ll be speaking on evolution and the Galapagos Islands in Branson, Missouri, at our Proclaiming the Faith Conference in July. As many of my faithful blog readers know, I experienced two weeks exploring the Galapagos Islands in May of 2011. I took over 2,000 pictures and published a daily blog about my experiences. At the time I can remember thinking, “This would make a great presentation.” I’m very much looking forward to sharing the wonders of God’s creation in the Galapagos.

A few months ago, I received a letter from the Galapagos Conservancy asking me to give money to fund the important conservation work they do in the Galapagos. They stated, “Along with natural beauty and engaging creatures, the Galapagos Islands hold historical evolutionary importance, much of which we do not yet completely understand.” This is an obvious reference to Darwin (greatly revered in the Galapagos) who studied the islands during his voyage on the Beagle and developed the idea of evolution by natural selection. Are the Galapagos a laboratory for studying evolution (in the molecules-to-man sense) or a great example of the effects of natural selection, genetic drift, and other mechanisms of speciation among organisms that reside there? 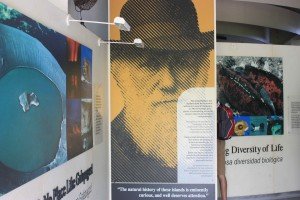 Over and over we see the terms natural selection and adaptation used synonymously with evolution (see my chapter "Is Natural Selection the Same Thing as Evolution?" for more information). Take for example several quotes from a Smithsonian magazine article [1] that featured Galapagos as one of the top 10 “evotourism” sites (emphasis mine).

In Charles Darwin’s Day, the Galapagos Islands were perhaps the best place in the world to observe evidence of evolution by natural selection.

With no place else to go, the Galapagos’ denizens adapted to conditions unique to their new homes.

Galapagos are a wonderful place to study evolution . . .

. . . natural selection is frequently at work in the Galapagos . . .

Grant recommends that a newcomer to the islands “be alert to differences between obviously related organisms” and visit at least two islands to appreciate how descendants of the same founder species adapted to different environments.

We must remember that natural selection is a passive entity and the organisms themselves are the ones that are actively changing. Natural selection doesn’t have any “power” in that sense to change one kind of organism into another. In any given environment, organisms of a given population with particular variations can survive better and are selected “for,” while those that do not have those variations are selected “against.” Variation within populations can decrease over time as the population essentially becomes more adapted or specialized for a particular environment. This may lead to speciation within a kind (believed to be at the family level) but does not add the genetic information needed for one kind of organism to evolve into a different kind of organism no matter how much time is involved.

The Smithsonian article quotes Peter Grant, a longtime researcher of Darwin’s finches on the islands, as saying the Galapagos are “a place to let the mind wander and imagine what it must have been like for Charles Darwin to visit with his worldview, curiosity and unknown future” (emphasis mine). Talk about hitting the nail on the head! It is about worldviews when it comes to historical science—are man’s ideas about the past truth or is God’s Word the truth? It has a direct bearing on how we interpret the evidence of the present and the conclusions we draw about the past.

I’m so excited to take people on a journey to the Galapagos Islands from a different view and experience the marvel of God’s creation. I encourage you to make plans to join us in Branson, since there will be something for everybody at the conference including special tracks for women, teens, and children. Register today!

A few of the animals I'll be discussing in Branson: 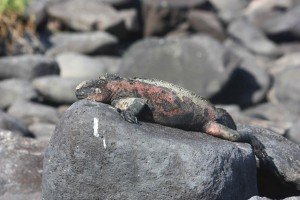 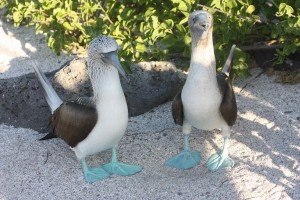 Blue-footed boobies- they have an amazing courtship dance