Date at the Smithsonian

My friend Susan and her husband Dan live in the area of Washington, D.C., and have developed a passion for creation apologetics. They have taken several of our online courses and have taught on the subject in their church. Recently they decided to visit the Smithsonian on a date. Susan wrote the following about it:

We decided to have “creation day” at the Museum of Natural History. After seeing the fossils, Dan came home convinced that even a full-sized T-rex or diplodocus could have fit on the ark easily. I was amused that the plesiosaur and mosasaur fossils were both found in Kansas (which was once an ancient ocean. . .) and that even the Smithsonian admits that archaeopteryx is a bird! 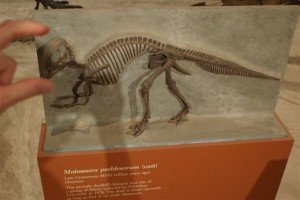 The human origins exhibit was much more depressing, but it's good to know what “the other side” is saying. They are, however, advocating that race is strictly a cultural issue and that all humans are a single species. We didn’t have time, though, to watch the whole video to see if they explained in more detail how that concept actually works. If it was like the rest of their explanations, there probably was not much more detail in the video. The most humorous part of the human origins exhibit for Dan, which he told me about afterwards, was the DNA portion. Of course, they were pointing out the similarity in DNA between humans and chimpanzees, among other things. So one boy walked away from the exhibit chuckling, “I’m 60% the same as a banana! HaHa!” 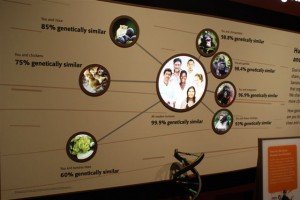 Genetic similarity of organisms to humans

I’ll tell you, it was really nice going to the museum and having the background to be able to separate the truth from the lies. We found assumptions everywhere! They even had these “How do we know?” placards with photos of Smithsonian scientists explaining how we know. There were assumptions in those placards, too. 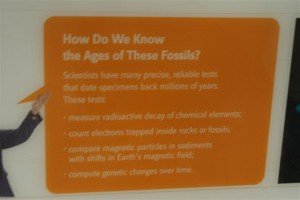 We didn't do the Hope diamond/gems/crystals exhibit this time because we saw that part last time. . . .  But in that section, it was “these gems formed in a lot of hot, mineral-rich, supercritical water” on just about every sign we read. Nothing to explain where most of that water came from, though . . . I thought “water, water everywhere” and they still can’t see the evidence for a global flood. It was screaming at me! As I looked at the pictures, one of the things that struck me was the obvious disparity between the sign that talked about the “precise, reliable tests that date specimens back millions of years” and the sign for the duckbill dinosaur that dated it to be 50–65 million years ago. A 15 million year range doesn’t seem very precise to me! Praise God that Answers in Genesis not only provides resources to equip people to be discerning when they visit such places, but also that the Creation Museum in proclaiming the true history of the world and universe.

I think a “creation day” like this with a spouse or even a child is a great idea. Most major cities have a museum of natural history. However, I would ask that before going to the secular museum, have a “creation day” at the Creation Museum so you can be thoroughly equipped to “demolish [the] strongholds” (2 Corinthians 10:5) that have such a firm grip on our culture today.