Yesterday we spent the day exploring Santiago. For our first exploration we landed on a black beach and were surrounded by places where the ocean had worn away the surface of the island exposing multiple rock layers. I am guessing the layers represent past volcanic eruptions on the island. We once again hike through lava fields, but here the lava (as it has been on the past several islands) is not sharp and pointy, but smooth and named Pahoe-hoe (Hawaiian word for “ropy”) lava. We see a sea lion, lava lizard, painted locust, American oystercatchers, and marine iguanas.

The waves here are quite powerful and have eroded parts of the lava field under which we are standing. The action of the waves has created fantastic lava bridges and small inlets where the water rises and falls with the waves. The beauty of this place is breathtaking, and this is one of my favorite places on the islands. The water is crystal clear, so we soon see a big Galapagos green turtle, and I finally get a good picture! We also spot several Galapagos fur seals. They are really not seals but a type of sea lion that is smaller and tends to stay in the water more than the Galapagos sea lion. We take the opportunity for a group photo on one of the lava bridges before we leave.

In the afternoon we travel to another area of Santiago where the sand is not black but coffee colored and very fine. This is a nesting place for brown pelicans and we see many adults and juveniles resting in the trees surrounding the beach. Our naturalist tells us that there are many species of Darwin’s finches on the island. He is hoping to see the woodpecker finch that uses tools to extract insects from trees and the sharp-beaked ground finch, also known as the vampire finch. This finch pecks at the base of masked booby feathers and then drinks their blood, and it will even eat booby eggs. We travel through the many button mangroves on the beach and spot a small freshwater lake formed by the recent wet season. Eating in the lake are several white-cheeked pintail ducks. Our naturalist can hear the woodpecker finch, but we cannot see it. Soon he begins making his own finch song, and I am amazed as all these finches that were previously unseen come flying out to the ground around us. Although we see both the small and medium ground finch (and earlier he showed me a tree finch), the woodpecker and vampire finches decided not to heed his call.

We see many Galapagos green turtle nests. According to our naturalist this is the only turtle that nests in the Galapagos. The conditions here on several of the islands are perfect, including the closeness of nesting places to the water, the absence of sea lions, and the color of the sand, which is important for maintaining the right temperature of the eggs. Several of the nests have broken egg shells, and we even see one small hatchling that didn’t make it. A Galapagos mockingbird joins us and is observed scratching at the sand in the nests. Our naturalist tells us they do this to “help” the young sea turtles make their way to the surface so they can eat them. We are reminded of yet another impact of the Fall.

As we prepare to leave, we are treated to a special show by the blue-footed boobies, which are diving into the ocean to eat. They fly up high, and then when they spot their prey, turn their bodies so they are at a 90-degree angle to the surface of the water and dive hard and fast (60–70 miles per hour) shaped like a precision bullet hitting its target. The water is shallow, and they hit the water so hard that you would think they would break their neck. But after the splash they create by diving, we see them resurface and float on the water enjoying their meal. Amazing birds!

In the evening I went to the sun deck to take pictures of more interesting rock formations we were passing. I was treated to a spectacular light show as the sun set. Different shades of blue, pink and orange formed in the sky and reflected in the water. The song, “How Great Thou Art” came to mind, and the pictures of this sunset just don’t do it justice. Today we explore more of Santa Cruz and Santiago. Enjoy the pix! 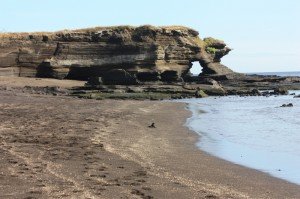 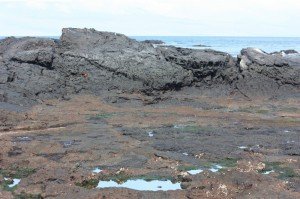 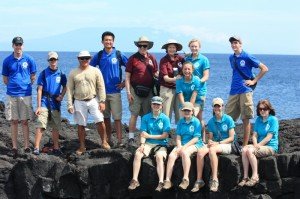 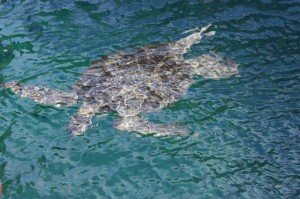 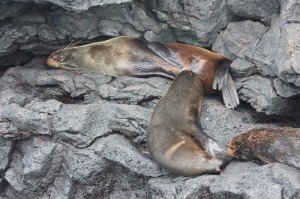 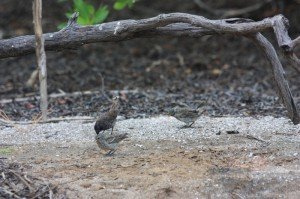 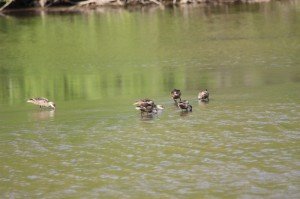 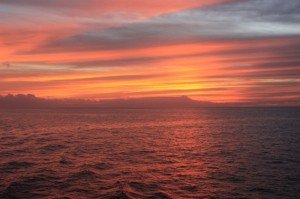