Yesterday our first stop was on the rocky beaches of Fernandina, the youngest island in the Galapagos. It is home to one of the largest populations of marine iguanas. When we arrive in the morning it is low tide and we can actually see the iguanas eating algae off the rocks. Within a short time of our arrival the tide begins to come in and a mass exodus of marine iguanas begins, swimming toward shore. The ocean becomes spotted with their little black heads! Our naturalist tells us they arrive on the shore exhausted and must warm up and rest a while before they travel further inland to avoid the rising tide. We also see some massive male marine iguanas heading out into the ocean. We are told that they are large enough that they can go out at high tide and dive deep where the algae are more abundant. As we walk along the shore, we have to be careful not to step on the iguanas that blend in so well with the black lava rock.

The lava fields we walk on are amazing, filled with all different shapes and structures including small lava tubes, ripples, cracks, and gravel-size rock. Because the island is young, the vegetation is limited, and this is the first place we spot lava cacti. Our naturalist informs us that they are one of the first invaders of the lava and make way for other plants to grow in the future.

Next we spot some whale bones. I taught anatomy for six years but I have never seen vertebrae this size! We have been on the lookout for living whales in the water, but so far we have seen none.

We spot several flightless cormorants on nearby rocks. Theses birds are related to cormorants that fly, and Galapagos is only place to find the flightless species. Their wings look small and stubby and are only about a third of the size needed for a bird of their size to fly. Their feathers are not waterproof, so they spend a lot of time when coming to shore extending their wings and drying them in the sun. The adults also have beautiful blue eyes. The ocean is an abundant source of food due to the cold water upwelling that brings nutrients near the surface compared to the rather vegetation poor landscape. It makes sense that the cormorants adapted when coming to the islands to feed in the water instead of on land. It is not known whether the flightlessness is directly selected for because of the advantages it provides or if selection is relaxed and the flightlessness is not selected against since food is abundant in the water. Either way, they are fun and interesting animals to watch.

In the afternoon we head to Tagus Cove in Isabela. Our naturalist tells us that the largest starfish ever found (one and half meters across) was found in this area. We hike a ways and are treated to a view of a collapsed crater that has filled in with water with the bay just beyond it. We hike more (a lot more!) and finally arrive at the top of a cinder cone and see a magnificent view of Volcano Darwin. In the distance we see a black beach that has a small population of mangroves. We are told this is the only place where the endangered mangrove finch lives. That is rather surprising considering how many mangroves we have seen all over these islands. There are only about 150 of the finches left, and efforts are underway to conserve them by moving a portion of the population to other areas of mangroves.

That night we are invited to the wheelhouse to witness the crossing of the equator. We all anxiously watch the GPS for it to read 0 000 000. We count down just like it is New Year’s Eve and then celebrate once we have crossed. Tomorrow we go to Santiago. It’s hard to believe in just a few days I’ll be heading home, but I’m really looking forward to seeing my family again. Enjoy the pix! 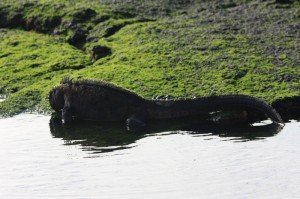 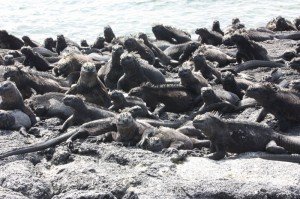 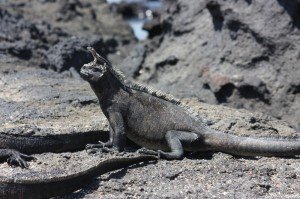 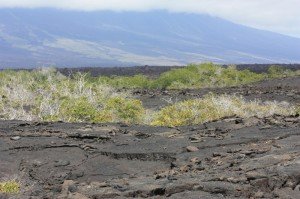 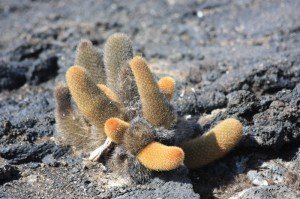 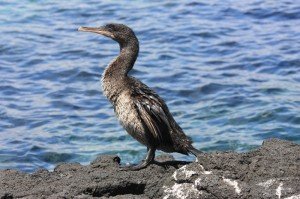 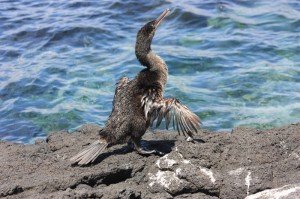 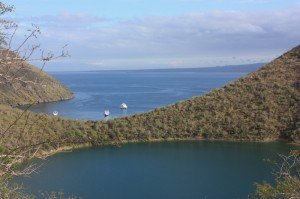