Odds and Ends About This Eclipse

Many people, including me, are excited about the total solar eclipse on August 21. As previously announced, I plan to be in Oregon that day, on a field trip with the Design Science Association of Portland. While most of North America will experience a partial solar eclipse, the path of the total eclipse is only 70 miles wide. I fear that many people who have heard about the eclipse are under the impression that being where the eclipse will be partial is nearly as good as being in the path of totality. It isn’t, by a long shot. Quite literally, it is the difference between night and day. But there’s far more to a total solar eclipse than the sky just getting dark. One must experience a total solar eclipse (I’ve seen only one so far) to understand. To me, it is the most incredible thing in all of creation.

One must experience a total solar eclipse (I’ve seen only one so far) to understand.

While many of us will enjoy this marvel of God’s handiwork, there are others casting it in a very different light. There are many websites out there promoting the idea that this eclipse is an apocalyptic sign or a fulfillment of biblical prophecy. For instance, this appears to be one of the more popular ones promoting this idea. Disappointingly, even Anne Graham Lotz has blogged about this eclipse. While she didn’t actually endorse this idea, Mrs. Lotz didn’t discount it either. Mrs. Lotz likened the people enjoying the eclipse to the drunken feast of Belshazzar in Daniel 5. This overlooks the fact that undoubtedly what offended God was Belshazzar’s use of the gold and silver vessels looted from the Temple (Daniel 5:1–4) for a feast dedicated to pagan gods. I know that no one with our field trip that day will have such an attitude, nor do I think that many, if any, along the path of totality will. Some are tying this eclipse to a supposed apocalyptic sign on September 23, 2017, a little more than a month later. I’ve already written about the events, or more properly, the non-events of September 23, 2017. For instance, a total solar eclipse generally is visible somewhere on the earth about once every year and a half.

Even the flat-earthers are getting involved with this eclipse. I’ve written on the flat earth in five articles (this is my latest) on the Answers in Genesis website and in a previous blog. Flat-earthers argue that eclipses prove the earth is flat. In reality, the opposite is true. For instance, this video is typical of the arguments flat-earthers use. The video correctly notes that the eclipse shadow is very small, much smaller than the moon. (As I previously mentioned, the path of totality for this eclipse is 70 miles wide, whereas the moon is about 2,000 miles in diameter). But then flat-earthers claim that this proves that it’s not the shadow of the moon causing an eclipse, because shadows are always larger than the object casting the shadow. This is illustrated by a diagram at the 9:55 point in this video. However, note that the light source in the diagram is a point, or at least it is smaller than the object casting the shadow. But this is not the case for the sun and moon. The sun is 400 times larger than the moon, so the cone of the shadow is going the opposite direction as shown in this image.

The correct situation is shown at 12:28 in this video. However, note that the sizes and distances are not to scale. The earth is four times larger than the moon, but this illustration shows the earth only slightly larger than twice the moon’s size. Furthermore, the distance between the moon and earth is 30 times the earth’s diameter, while the distance between the sun and earth is 400 times the moon’s distance from earth. Obviously, an illustration such as this is difficult to draw to scale—if the distances were contained in a simple figure, the diameters of the earth and moon would be so small as to be nearly impossible to see. However, the gist of the figure is correct—since the sun is so much larger than the moon, the moon’s shadow reduces in size as it approaches the earth.

On the morning of August 15, 2017, I did a simple experiment to test this. Assuming the conventional cosmology, I calculated that the sun shining on a volleyball a little more than eight inches in diameter would cast a shadow about half its size nearly 40 feet away. But if the flat-earthers are correct, the volleyball’s shadow ought to be larger. As soon as the sun rose above the trees beyond the parking lot, I asked a coworker at Answers in Genesis to hold the volleyball over her head so that it cast a shadow on a makeshift white screen 40 feet away. I measured the dark part of the shadow (there is always a fuzzy area around the shadow). As expected, the shadow was a little more than four inches across. 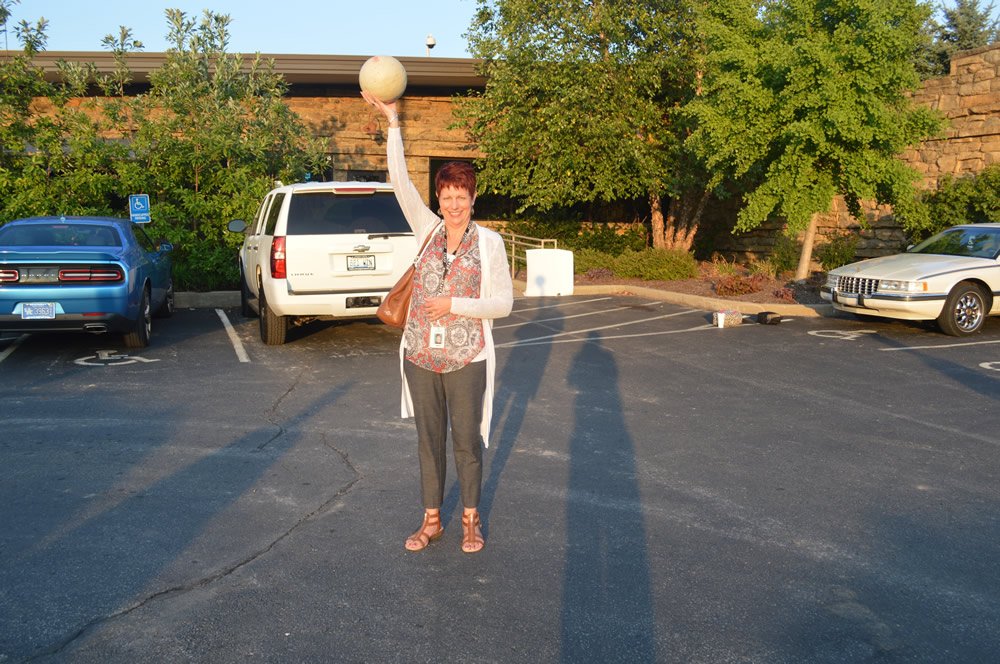 Clearly, my experiment confirmed the prediction of the conventional cosmology (that the sun is an 860,000-mile sphere 93 million miles away, and the moon is a 2,000-mile diameter sphere a quarter million miles away). On the other hand, the flat-earth prediction that the volleyball’s shadow will be larger than the volleyball clearly was disproved. This is so typical of flat-earth arguments. If people would stop watching all those videos and get out and try some real experiments such as this, they’d soon see that the flat-earth videos are lying to them and misrepresenting reality.

Y’all enjoy the wonder and beauty of this eclipse!

Previous Article The Latest “Earth-Like Planet”: LHS 1140 b Next Article Thoughts on the Recent Solar Eclipse