Astronomy from the Bottom of Grand Canyon

In my last blog post I wrote about the Questar 3.5-inch telescope that Answers in Genesis recently acquired and about my plans to use it on Grand Canyon raft trips. I got my first chance to use it on a raft trip over Labor Day weekend. The weather could have been better for astronomy, but I’m thankful that the recent rains in Grand Canyon ended about the time that I arrived. It was often cloudy in the early evening, but then the skies would clear for at least a while—usually after everyone had gone to bed. 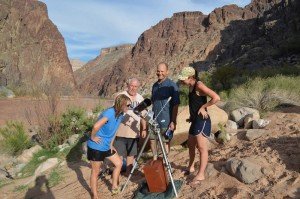 Before going to the river we spent the night at the Bar Ten Ranch. It was clear enough that afternoon to use the telescope to view sunspots, as we did again on the river two days later. Unfortunately, the sky clouded over near sunset and remained cloudy much of the night. The first night on the river I didn’t even unload the telescope from the raft for fear of rain. After dark many people in the group sat around in a circle and asked questions about astronomy. Eventually the skies cleared, so I pointed out constellations and bright stars with a laser pointer. Everyone was most impressed with how bright the Milky Way was. After most people had gone to bed, a few of us easily saw M31, the Andromeda galaxy. It was a fine sight through binoculars.

The second night on the river the skies were again cloudy early, but they soon cleared. Through the telescope we were able to see the Ring Nebula (M57) and the globular cluster M13 in Hercules. We also looked at Albireo, the star that marks the head of Cygnus, the swan. Through the telescope one can see that Albireo actually consists of two stars, one very yellow and the other a distinct blue. The close separation accentuates the color difference, and they really illustrate the fact that stars have color. We might have seen more, but the stupid rocks of the canyon were in the way and the clouds returned for some time. 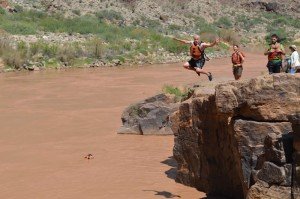 The trip was not without incident. In a spot between rapids in Granite Gorge the engine on the other raft had a malfunction, which required a swap with the spare engine. While the crew worked on that, the boat engines were silent and we were far enough from rapids that the river was quiet. In the silence, a couple on my raft sang a hymn, with harmony. The reverberation off the granite walls enhanced the beauty of the hymn, and the entire group was blessed. When the engine swap was complete, the cord to the engine on our boat broke when the pilot attempted to restart our engine. That required a second engine swap. I had never encountered an engine swap on any of my three previous trips, let alone a double swap—and we were between rapids. The Lord protects us. 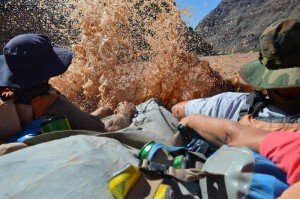 Yes, the Lord protects us, even when I found a small scorpion in my bag. Apparently it crawled into my bag one night, and in the morning I packed it up and transported it to our next campsite. I saw it when I opened the bag at the new campsite. No one was harmed, including the scorpion. One of the boatmen took the bag away from camp and encouraged the scorpion to vacate. 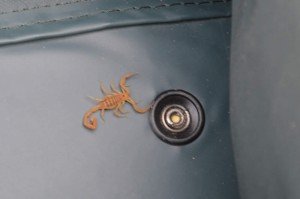 If any of you would like to join a “geology by day, astronomy by night” raft trip, my trip next year will be June 29–July 5, 2014. You’ll find it on next year’s schedule at the Canyon Ministries website.

We have Stargazer’s Nights on the evenings of September 13 and 14 at Johnson Observatory here at the Creation Museum. So far, the weather hasn’t been too cooperative for our Stargazers events this year. Though I can’t guarantee that this month will be better, statistically the chances are very good in September. You might want to consider visiting the museum then and participating in one of these nights.
Previous Article Looking at Sunspots, Comet ISON, and the Planets Next Article Comet ISON and My Recent Travels