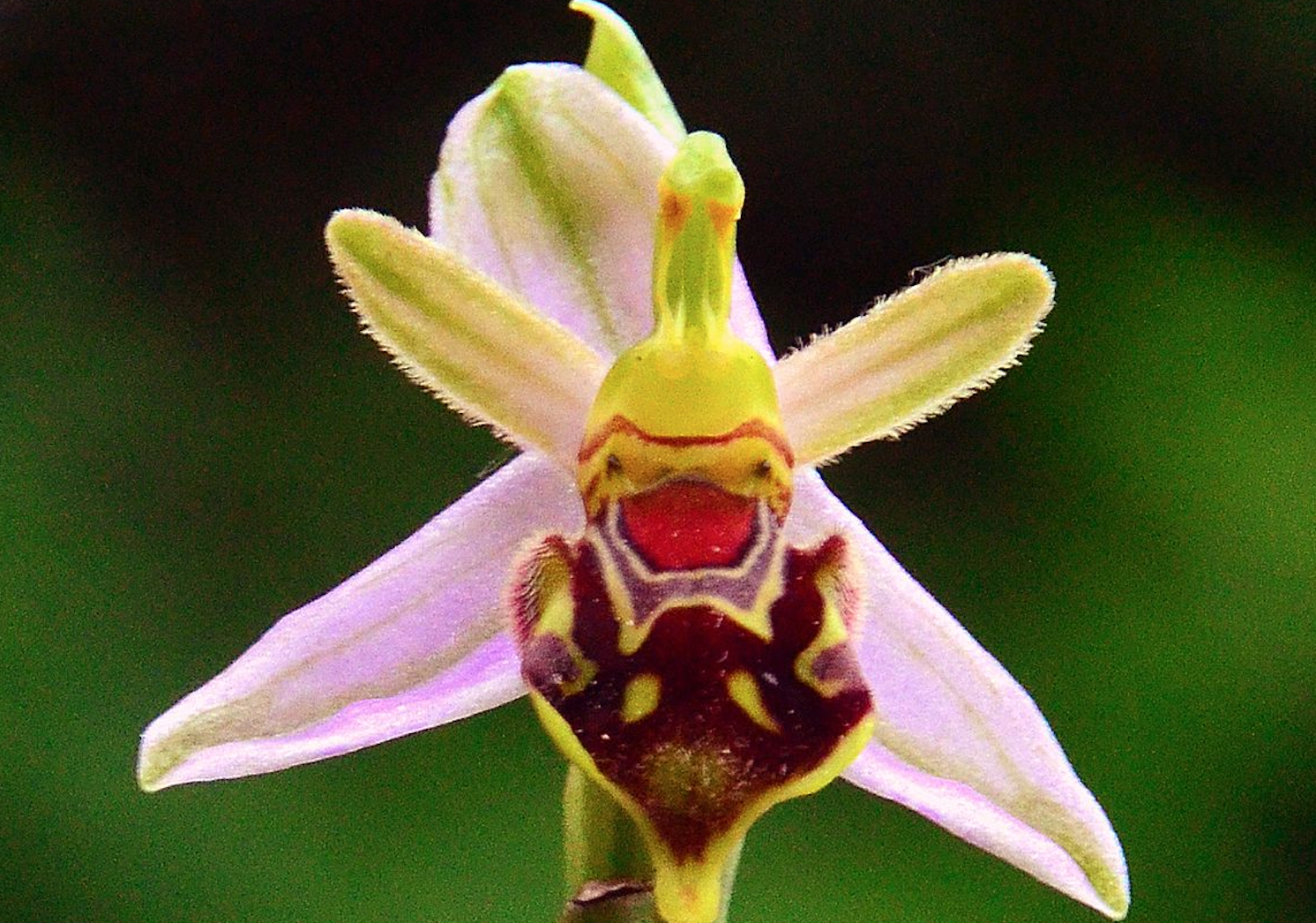 by Calvin Smith on May 10, 2021
Featured in Calvin Smith
Share:
Email Using:
Gmail Yahoo! Outlook Other

Okay, so I know I’m diverging from my title referencing “amazing animals” in this segment, but since our theme has been Romans 1:20—that no one has an excuse for unbelief because of the evidence of creation—and since Job 12:7–9 mentions the “bushes of the earth” as evidence of our Creator, I couldn’t resist mentioning this paramour of the plant world and its relationship to the beloved bee.

I grew up competing for food with five older brothers and a sister in a middle-class home in Canada. We seemingly always had a generic jar of honey lying around, typically a homogenized, pasteurized container with a logo of an all-too-happy insect titled “Billy Bee” on the label. My Mom seemed to like it on sandwiches, but I was much more of a peanut butter and jam guy myself (raspberry, not strawberry please). I never found honey all that exciting.

It wasn’t until I was asked to do a speaking tour of Australia years ago that I realized there were many different types of (rather delicious) honey due to the wide variety of plants that bees pollinate—most notably eucalyptus. While all honeys are basically the same substance, I was unaware that the flavors and properties could vary so widely.

From the citrusy flavored Orange blossom honey, the more earthy and herbal blue gum honey, the strong, floral Leatherwood from Tasmania, or the much-coveted Manuka (known for its healing properties), Australia certainly has a smorgasbord of golden goodness made available in honey shops everywhere. And again, the key to all this diversity lies in the plants that bees frequent. One such plant is a stunning example of God’s design and bears the name of the amazing, industrious insects that provide us with this tremendous treat: the Bee Orchid.

The Ophrys apifera (commonly known as the Bee Orchid) is a marvel to behold, and anyone observing one would likely be unsurprised to hear its designated household name. Interestingly, Ophrys is a word from ancient Greek meaning “eyebrow.” In Latin, Apifera means “bee-bringing.” Both words will make sense as we discover more about them.

Now, these orchids look like a bee in shape, size, and general coloration. It also feels like a bee—kind of fuzzy. But most amazing is that they also produce pheromones that smell like a bee (virtually indistinguishable from the insect's natural pheromones). Yes, they smell like a female bee in “heat,” so to speak.

To keep this article rated PG, let’s just describe how these orchids reproduce in somewhat simplistic (but accurate) terms. Picture Mr. Bee flying around one day when he catches a whiff of perfume and, looking down, sees what he thinks is a female bee.

First, we should note that these plants have both male and female parts, per se. The male part is the pollinia, and the female part is the stigma. The part of the Bee Orchid that Mr. Bee lands on (that looks like a female bee) is called the labellum, which is a specially designed landing platform. And because of the way he mounts this platform in an effort to mate with the flower, his head will bump into the pollinia, which has a special glue that attaches a structure containing the pollinia to his head!

When Mr. Bee decides to leave, a special mechanism in the structure that is now stuck to his head (called the caudicle) bends the pollinia down to a more horizontal position. Undaunted by the acquisition of this strange new “hat” he’s acquired, Mr. Bee carries on his day. Of course, as a typical male with a one-track mind, he then looks down and sees what he thinks is another female bee.

This time, when Mr. Bee lands, the pollinia (the male part) stuck to his head is now aligned to contact with the stigma (the female part), and, voila, we get more Bee Orchids! Scientifically, this mechanism is called Pseudocopulation, the name given to a situation in which individuals interact in a manner resembling intercourse, but no real copulation occurs.

The typical evolutionary explanations for this amazing orchid’s supposed existence contains mostly simplistic appeals to natural selection over millions of years, with little to no concrete explanations for how it could have happened, like the following:

Ophrys apifera is an attractive orchid . . . resembling a bee, and two other inner tepals that look like antennae. The whole flower thus mimics an insect. In biology, the term 'mimicry' refers to cases where natural selection has favoured a resemblance between individuals of different species.1

Ophrys apifera, known in Europe as the bee orchid, is a perennial herbaceous plant of the family Orchidaceae. It serves as an example of sexually deceptive pollination and floral mimicry, as well as of a highly selective and highly evolved plant–pollinator relationship.2

So the big question is this: How can an orchid, without eyes, a brain, tactile senses, or a nose to differentiate between scents put together such a sophisticated assemblage of parts and functionality through random processes essential for its survival? The Ophrys apifera plant has never been able to feel or see a bee that’s landed on it.

God’s created and incredibly ordered world and its inhabitants truly bear witness to his existence and his greatness.

Orchids aren’t observing bee shapes and colors to imitate. They don’t have chem labs to concoct various versions and blends of chemical compounds to find a female bee’s perfect sex pheromones (cuticular hydrocarbons, in particular; n-alkenes, oxygenated acids, aldehydes, alcohols, fatty acids, and corresponding esters, etc.). They aren’t feeling bees so that they “know” to be fuzzy! (And by the way, should anyone seeing this roll their eyes at these stories of evolution integrating a “learning” process, I invite you to read part 4 of this series to see quotes from evolutionists proposing just that!).

If certain plants need bees to reproduce, how were they reproducing before bees existed (even by one generation)? If bees weren’t needed for these plants to reproduce, why bother evolving all these mechanisms that require extra resources and thereby vulnerability to extinction (should bees vanish geographically or permanently)? Evolution is supposed to be survival fitness; requiring such a delicate and cooperative unity between these living things is highly dangerous from a survival standpoint.

So, what is the answer from the evolutionary world? Well, according to a paper from the prestigious Royal Society,

Despite considerable progress made in our understanding of the floral traits involved in pollination by sexual deception, little is known about the evolutionary origin of this remarkable mimicry system, the role of pre-adaptations in promoting its evolution and its extent as a pollination mechanism in flowering plants.3

In other words, we can use observational science in the present to measure, analyze, and examine the functionality of the plant and its relationship to bees in present, but we have no true understanding of how all of this came together through chance and happenstance. It’s the equivalent of telling someone you’ve pulled apart a car and figured out how all the parts work in conjunction to one another to make it work, but you don’t know who designed or manufactured it.

These facts highlight what biblical creationists said of the creation/evolution debate all along: There is a difference between operational and historical science. This is not some slight-of-hand fallacy or a scientific differentiation without a difference, which high-level evolutionists have acknowledged. One of the twentieth century's leading evolutionary biologists Ernst Mayr stated,

Evolutionary biology, in contrast with physics and chemistry, is a historical science—the evolutionist attempts to explain events and processes that have already taken place. Laws and experiments are inappropriate techniques for the explication of such events and processes. Instead one constructs a historical narrative, consisting of a tentative reconstruction of the particular scenario that led to the events one is trying to explain.4

Research into evolution is a bit like forensic detective work. Because it’s impossible to carry out million-year experiments, we instead look at what evolution has produced and try to figure out what happened and why.5

And perhaps even more fitting to our example above, the influential biologist and naturalist who has been nicknamed "The Darwin of the 21st century”, Harvard Professor Dr. E.O. Wilson said,

If a moving automobile were an organism, functional biology would explain how it is constructed and operates, while evolutionary biology would reconstruct its origin and history—how it came to be made and its journey thus far.6

Don’t Be Fooled by an Appeal to “Science”

God’s created and incredibly ordered world and its inhabitants truly bear witness to his existence and his greatness. Don’t be fooled by naturalistic teaching that claims that science has disproven God. Such “wisdom” is actually foolishness, for the fool says “there is no God” (Psalm 14:1). Bible skeptics’ crafty appeals to unproven, naturalistic explanations continue to be shown as flimsy, unproven stories rather than science, while God’s Word holds true.

For the wisdom of this world is folly with God. For it is written, “He catches the wise in their craftiness.” (1 Corinthians 3:19)

This week’s question: Do you know the difference between operational and historical science regarding the creation/evolution debate?