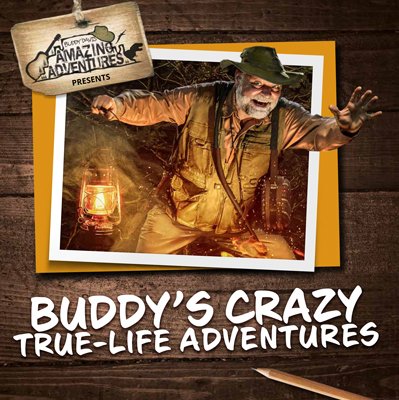 Give Buddy’s Crazy True-Life Adventures to family and friends, and get one for yourself too!

We traveled 477 miles to Binghamton, New York, on Thursday to speak at the Men’s Adventure. We got into a little ice in Ohio, but most of the roads were fine. This men’s ministry has been a yearly event for over 20 years. It is sponsored by Empire State Fellowship of Regular Baptist Churches. Craig Golden is the head and does a fantastic job of organizing this major event. There were 926 men and boys there.

On Friday evening, I spoke about my Alaskan adventure, where we found what appears to be unfossilized dinosaur bones. It was very well received. On Saturday, I started off the day with my “Relevance of Genesis” talk. Then I did an hour long concert. In the afternoon, we finished with “Dinosaurs—Separating Fact from Fiction.” I was happy to see the amount of books and CDs that the men bought. They were getting armed to be able to defend their faith. Five gentlemen, from ages 5 to 79, accepted Christ as their Savior on Saturday—the angels rejoiced!

On Sunday morning, I did the Sunday school hour and spoke at the morning worship for the host church, Central Baptist.

Email me with new blog posts by Buddy Davis’ Blog: