Did the Bible Once Permit Homosexuality? 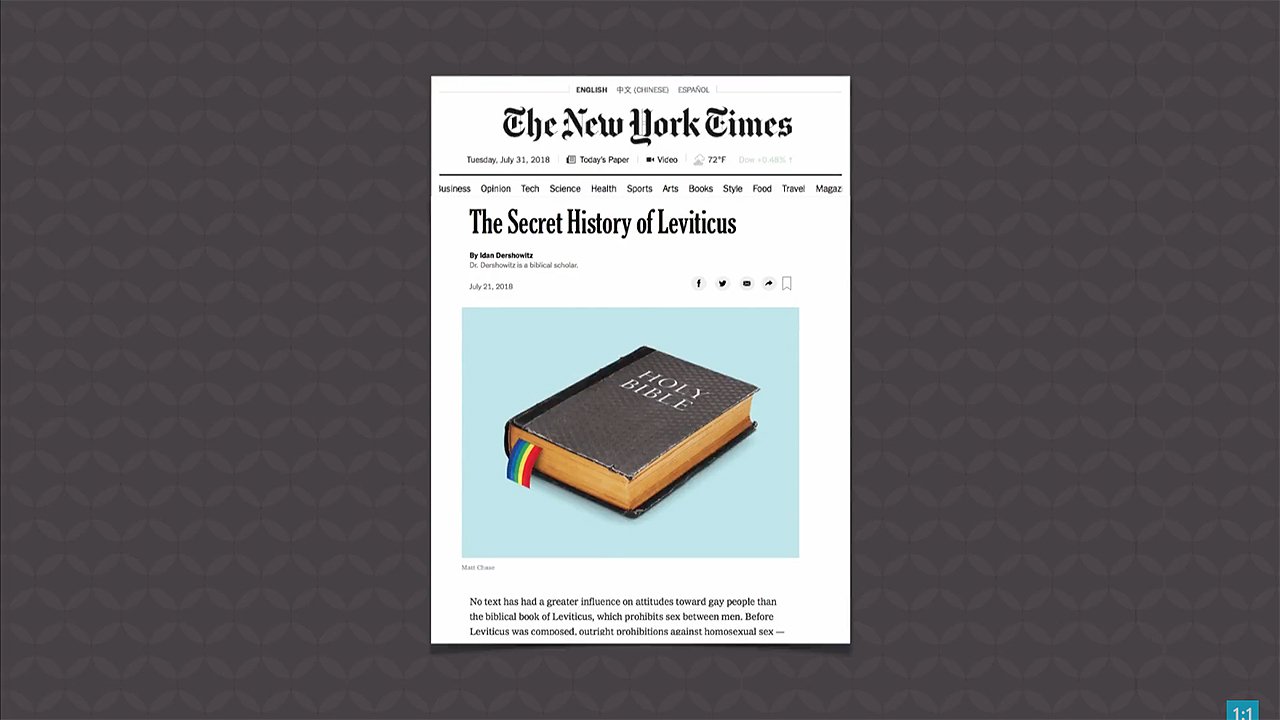 Did the book of Leviticus once permit homosexuality? That’s the (highly fallible) opinion of a Harvard professor of biblical studies. Dr. Idan Dershowitz, writing in the New York Times, proposes the ridiculous idea that Leviticus chapter 18 was rewritten to make homosexual behavior seem wrong. Sadly, Dr. Dershowitz is not alone in attempting to rewrite the Bible to permit gay relationships.

You shall not lie with a male as with a woman; it is an abomination (Leviticus 18:22).

He also looks at several verses in this chapter that deal with incest. He argues that the phrasing of Leviticus 18 points to an editor. Originally, he claims, two of the rules against incest (found in verses 7 and 14) were present and were about homosexual incest (relations with your father or uncle), and a later editor came along and updated them to focus on relations with your mother or aunt instead. He claims the editor updated them because of the addition or complete revision of Leviticus 18:22 which, in its current form, completely prohibits any homosexual behavior. Dr. Dershowitz falsely believes this verse was either added or revised to outlaw homosexual behavior, rather than allow it as was originally intended. This caused the proposed editor to update some of the incest laws as well.

But this biblical scholar overlooks the obvious meaning of verses 7 and 14. Genesis 2:24 tells us that a married couple become one flesh, so if you defile one (in this case, by having relations with your mother or aunt), you are really defiling both the husband and wife. This is clear from the account of Rueben and his father’s concubine (Genesis 35:22). When Jacob is blessing his sons, he does not bless his firstborn, Rueben. Why? As Jacob explains, “because you went up to your father’s bed; then you defiled it—you went up to my couch!” (Genesis 49:3–4). His act with his father’s concubine was also an offense against his father.

So Moses, in writing Leviticus 18, wrote not to uncover the nakedness of your father or mother or uncle or aunt. He then added a clause emphasizing that you should not approach the woman because 1.) an offense against your mother or aunt is also an offense against your father or uncle and 2.) homosexual behavior was already categorically forbidden (v. 22) so there was no reason for homosexual incest laws.

This scholar’s approach to God’s Word is typical of skeptical attacks on its authority. When it comes to issues like marriage, it really comes back to a question of authority. The Bible tells us the origin and definition of the marriage relationship. It came from God!

So God created man in his own image, in the image of God he created him; male and female he created them. (Genesis 1:27)

God—not any human being, scholar, or court—defines what marriage is. Dr. Dershowitz’ attempts to undermine Leviticus fail to recognize that marriage is not defined in Leviticus. It’s defined in the beginning—in Genesis (as Jesus confirmed in Matthew 19:4–5).

Leviticus is not the only place where homosexual behavior is condemned as wrong.

And Leviticus is not the only place where homosexual behavior is condemned as wrong.

For this reason God gave them up to dishonorable passions. For their women exchanged natural relations for those that are contrary to nature; and the men likewise gave up natural relations with women and were consumed with passion for one another, men committing shameless acts with men and receiving in themselves the due penalty for their error. (Romans 1:26–27)

Ultimately, the rejection of the biblical view of marriage comes down to the secular worldview. The evolutionary worldview chooses to accept man’s word over God’s Word. Once you do that, anything goes because there’s no longer an ultimate authority. Without God’s Word, there is no longer any ultimate reason homosexuality is wrong. This is why the authority of God’s Word is so important in today’s skeptical culture, and we must boldly stand on it and proclaim the gospel to a dying world.

This professor needs to contemplate this verse:

I discussed this item today on Answers News with cohost Dr. Georgia Purdom and regular guest Avery Foley. Answers News is our twice-weekly news program filmed live before a studio audience here at the Creation Museum and broadcast on my Facebook page and the Answers in Genesis Facebook page. We also discussed the following fascinating topics:

Watch the entire episode of Answers News for August 2, 2018.