Will a Rare “Christmas Star” Appear in the Sky This December? 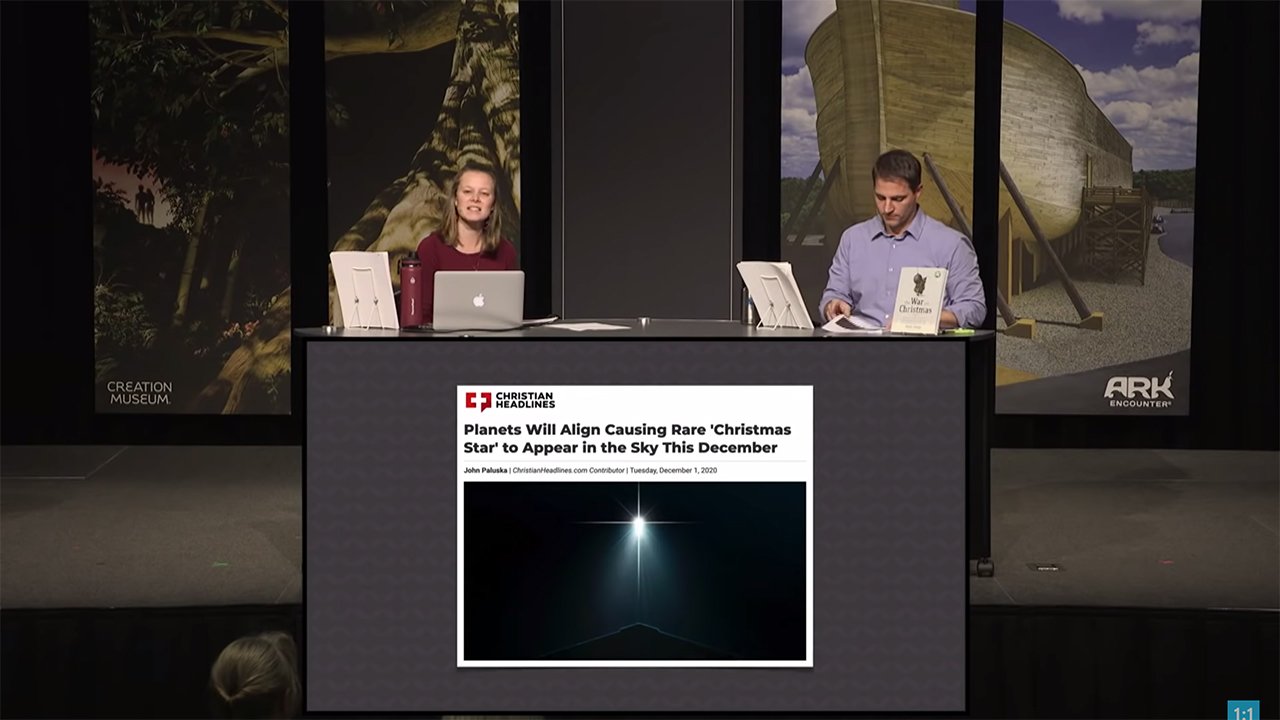 An astronomical phenomenon that will happen early in the evening on December 21 is quickly gaining worldwide attention in the media. This conjunction of Jupiter and Saturn—when the two planets will appear to be very close to each other from our earthly perspective—has been labeled by some as a “rare Christmas star,” and, due to its appearance in a few days before Christmas . . . well, you can see why the idea is getting so much attention!

Our astronomer, Dr. Danny Faulkner, shared his thoughts on this planetary conjunction (and how you can view it!):

This is the closest the two have appeared since the 13th century.

Jupiter and Saturn come into conjunction about every 20 years. I’ve seen two previous conjunctions of these two, in 1980 and in 2000. The one this year is unusual in how close the two will come to one another in the sky, about 0.1 degree. This is about six times greater than the minimum separation that the eye can resolve, so they will appear incredibly close. This is the closest the two have appeared since the 13th century.

However, this will be difficult, requiring a good exposure to the southwest, good weather, and your remembering to look early in the evening of Monday, December 21. If you go out too late, both will have already set. I suggest that you do some practice runs right away.

Jupiter is the bright star low in the southwest shortly after sunset. In fact, Jupiter will be the brightest object in the early evening sky until the moon returns in a couple of weeks. Jupiter sets early, so look for it perhaps 20-30 minutes after sunset. Saturn will be the bright star a short distance to Jupiter’s left. Being fainter than Jupiter, Saturn may not be visible if the sky is still reasonably bright.

If you do this a few evenings before December 21, it will prepare you for where and when to look on December 21 and what to expect. Also, over the intervening evenings you can watch the distance between Jupiter and Saturn close. You also will notice both planets getting lower in the sky each evening. A couple of weeks after December 21, neither planet will be visible anymore. In late January, Jupiter will reappear in the southeast before dawn. If you look then, you will see that Saturn will be to the right of Jupiter.

So does this have anything to do with Christmas or Christ’s birth? No, it doesn’t. Some have speculated that perhaps the actual Christmas star (the star that guided the wise men to Christ in Matthew 2:9) may have been a planetary conjunction (perhaps even a triple conjunction), but that idea really doesn’t match with what Scripture teaches, as Dr. Faulkner explains in his critique of a popular DVD exploring that option.

If you have the opportunity to view this rare conjunction, you will likely be reminded of the supernatural star that guided the wise men.

If you have the opportunity to view this rare conjunction, you will likely be reminded of the supernatural star that guided the wise men over 2,000 years ago—after all, it takes place only a few days before Christmas. And our response should be the same as the wise men: we should fall down and worship the King of kings and Lord of lords who made the stars and the planets to display his glory (Psalm 19:1).

Find Out More with “Christmas Star” in Our Stargazer Planetarium

During our free ChristmasTown event, you’ll also be able to stroll our spectacular garden of lights, meet Mary and Joseph at our live nativity, skate on our synthetic ice rink (ticket purchase required), and more. Visit CreationMuseum.org/christmas for a list of ChristmasTown dates.

This item was discussed Wednesday on Answers News with cohosts Avery Foley and Bryan Osborne. Answers News is our weekly news program held here at the Creation Museum and broadcast on my Facebook page and the Answers in Genesis Facebook page. We also covered the following topics:

Watch the entire episode of Answers News for December 9, 2020.