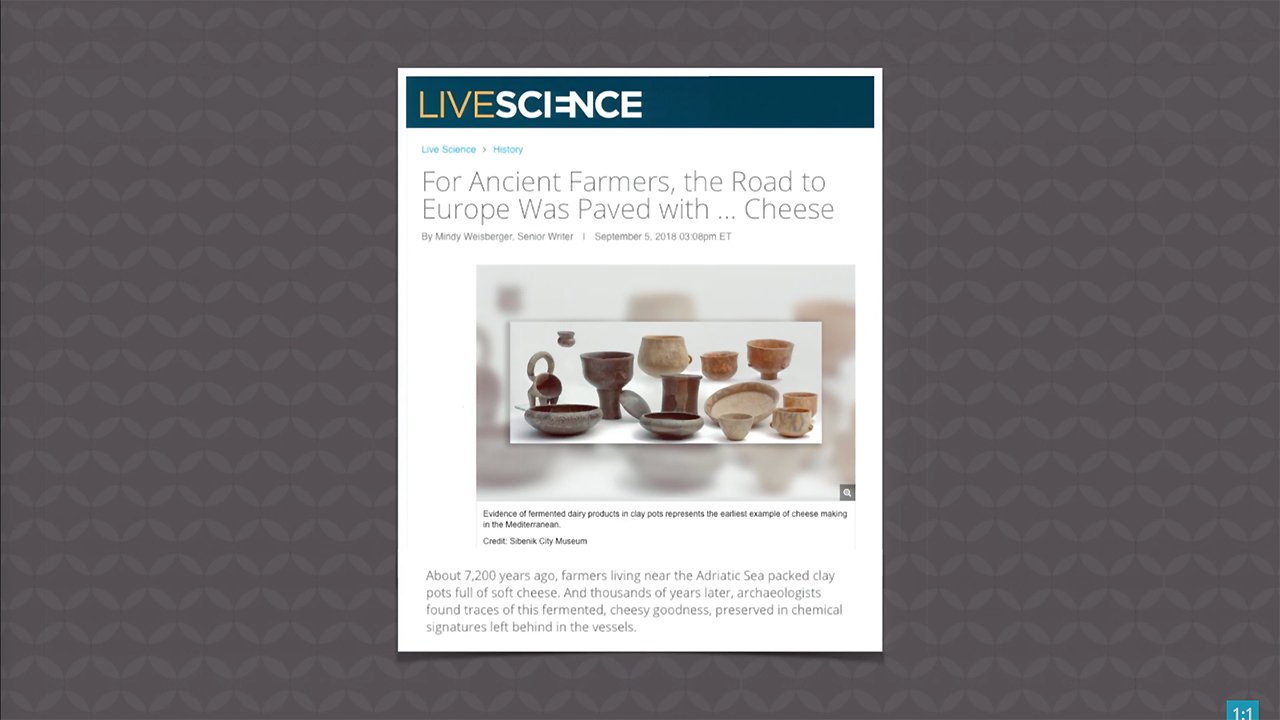 A recent find at two archaeological sites in Croatia (just across the Adriatic Sea from Italy) discovered dairy lipids in several fragments of jars of pottery. This means these people were likely producing cheese and storing it for eating later. In most cases, pottery fragments finds are carefully washed. But the researchers decided to keep some pots unwashed so as to be able to do an analysis and see if they could determine what was in the jars. Had all of the pottery been washed, any traces of dairy would have been lost. So this is an example of good fieldwork technique and observational science.

Now the journal article where this find was published mentions that this was around 7,200 years ago, based on radiocarbon dating, a method which is loaded with faulty assumptions. This is not based on observational science but origins (or historical science). As my son-in-law Bodie Hodge likes to say, this is man’s “imaginary time”.

From a biblical worldview, these were farmers who spread out from Babel after the confusion of languages in Genesis chapter 11, around 2200 BC. As people moved into and settled the Mediterranean, they planted crops, domesticated and raised animals for food, and at some point started fermenting cow, sheep, and/or goat milk into yogurts and cheeses. This would have decreased the lactose content and made this nutritious food source easier to digest, particularly for lactose-intolerant adults.

It’s no surprise that Europeans (and people with European ancestry) tend to have the lowest percentage of lactose-intolerance. This early “dairy farming” gave these farmers an additional source of less-perishable food, which is also high in protein and calcium. This would help them be better able to survive times of drought or crop failure. Rather than taking thousands of years to develop from hunter-gatherers to farmers to herdsman (as in the evolutionary story), mankind has always been intelligent and started out herding animals right away (Genesis 4:2).

This item was discussed today on Answers News with regular cohosts Dr. Georgia Purdom and Bodie Hodge. Answers News is our twice-weekly news program filmed live before a studio audience here at the Creation Museum and broadcast on my Facebook page and the Answers in Genesis Facebook page. We also discussed the following intriguing topics:

Watch the entire episode of Answers News for September 17, 2018.