Teaching Evolution with a New Emphasis

He once enthusiastically proclaimed evolution in his biology classes as a college professor. Now, Gary Parker (EdD biology) and his wife, Mary, proudly share creation with groups participating in programs at their Creation Adventures Museum in Arcadia, Florida.

How did a science professor who once dismissed the Bible as a made-up storybook become an outspoken advocate of creation?

“I now recognize evolution was the biggest lie I ever told. For many years, I was willing to fight for evolution as scientific truth and convince people they had to give up their old-fashioned biblical ideas about God.”

But that “old-fashioned” God had plans Gary didn’t understand. Because he had a degree in biology and several academic honors, a liberal Christian college hired him to teach biology even though he told them he was an evolutionist, not a Bible believer. A chemistry professor noticed that Gary and his wife didn’t attend church or any of the Christian events at the college, so he invited them to a weekly Bible study at his home.

A few months later, a discovery brought the problem home to Gary. When he was flipping through a book on DNA he had recently written, he saw that it already needed updating. “But as I attended the weekly Bible study, I realized the Bible never had to be rewritten because God got it right the first time. I began to pay attention, and suddenly it didn’t seem so strange that God wrote a timeless book, one filled with truths for all eternity.”

Gary faced a choice to either believe the experts, who must constantly revise their science to accommodate new discoveries, or believe God, who created everything, documented what he did, and has always remained the same.

“I was convinced that what the Bible said was true and realized it disproved the mountains of evidence I once used incorrectly to tout evolution.”

After he received Jesus as his Savior, Gary’s love for Darwin transformed into a love for Christ. Encouraged by Mary and a competitive fellowship award from the National Science Foundation, Gary went beyond his master’s degree and earned a doctorate, specializing in biology and geology, with an emphasis on paleontology, at Ball State University.

Earning his doctorate convinced Gary of the crucial need to continue to teach evolution but put it in contrast to creation. As he puts it, “The more you know about evolution, the less likely you are to believe it.”

For 35 years with the Institute for Creation Research (ICR), Gary participated in creation-versus-evolution debates at universities around the world and taught biology and paleontology classes at Christian colleges.

At the same time, Mary began to develop displays and hands-on workshops for ICR’s budding museum. Both relished personal Q&A with young people to contrast Darwin’s errors with evidence for a biblical creation. And they wanted to do even more.

In 2000, Gary and Mary opened the Creation Adventures Museum in Arcadia, Florida. Gary explains, “This museum isn’t one where you stroll leisurely for a couple of hours looking at display cases. Instead, groups are immediately immersed in hands-on activities and workshops, including collecting fossils in the Peace River (a popular destination for fossil hunters) as well as examining shark teeth and learning about the amazing designs of sharks, what they once ate, and their roles in a fallen world.” 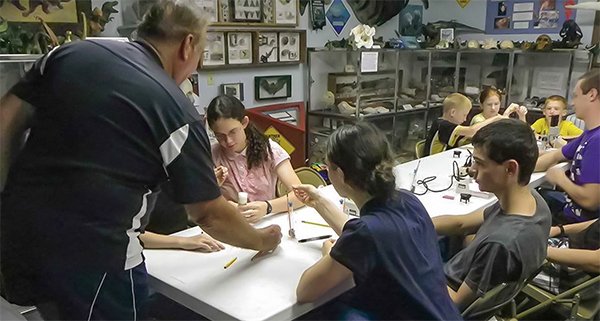 Dr. Parker helps students dissect modern animals so they will better understand the similar designs in their related fossils (many displayed on the walls in the background).

While they were helping another creationist group with a fossil-hunting canoe trip on Peace River, a friend and his 10-year-old daughter discovered what turned out to be the fossil remains of a baby mammoth and two adults. Mary’s notes and drawings are the official record of the excavation, which took over three years of digging in low water to complete. Replicas of the original fossils grace the museum’s entry display.

“I explain to groups preparing for a dig that each fossil is a missionary—one you can use to tell the world about Jesus Christ.”

Why dig for fossils? “I love to watch expressions on young and old as I explain to groups preparing for a dig that each fossil they find is a missionary—one you can use to tell the world about Jesus Christ.

“The design features shared by both living and fossil life forms, as well as their great variety and complexity,” says Gary, “are eloquent testimony for creation.”

“Because fossils are dead and sometimes diseased, they point back to the corruption of creation following Adam’s sin. We also explain to visitors that the flood recorded in Genesis was a worldwide catastrophe, which provided conditions for fast fossil formation in layers all over the world.”

For the less adventurous museum visitor, talks and seminars are available. Topics include dinosaurs and the Bible, DNA, the Grand Canyon, and many more.

Multiple homeschool classes use the museum’s equipment, supplies, and fossils collected from five continents. The classes also spend time together studying any of the seventeen creation science books the Parkers have written. They cover many topics, including fossils, biology, earth science, dinosaurs, ecology, and more.

Gary and Mary are always up for an adventure. While still working with ICR, Gary led more than forty hiking trips to the Grand Canyon and two raft trips. He and Mary also led scuba and snorkeling trips in the Florida Keys.

One summer, they even took two college students on a 10,000-mile motorhome workshop tour from Florida to California, around Canada, and back to Florida.

Indeed, these experiences helped lead Gary and Mary to start their museum, where they could share the truth about creation one-on-one, especially with young people.

Gary believes he will always have a passion to share Genesis with everyone he encounters.

“Our lives were transformed by people who invested in Mary and me and we hope to do the same for the rest of our lives and ministry.”

Even as skepticism spreads around the globe, the creation movement is flourishing. Meet some of the new generation of creation scientists.