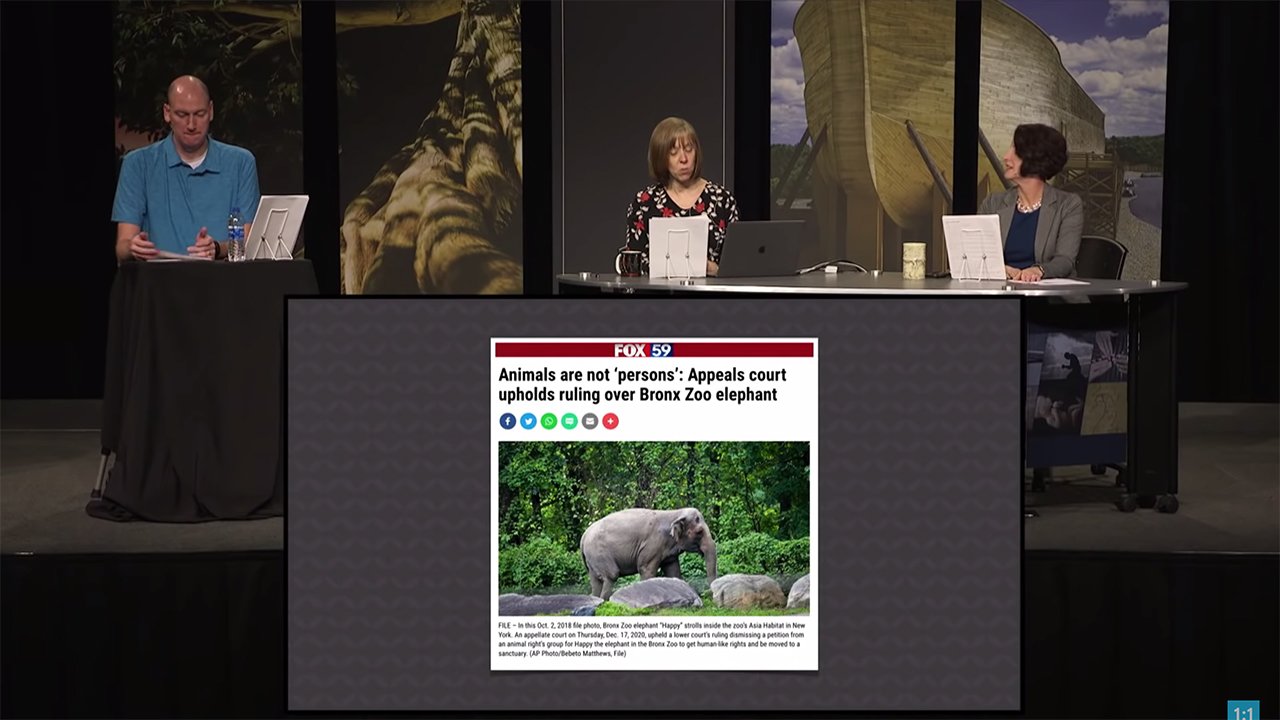 An elephant named “Happy,” who lives at the Bronx Zoo in New York, isn’t a person. Now, that should be obvious. After all, Happy is an elephant. But the courts, including now an appellate court, had to affirm what is “common sense” (as those who manage Happy put it) to most people—Happy is not a person. Undeterred, the “Nonhuman Rights Project” will take their case (i.e., that Happy, a supposedly unhappy elephant, deserves “human-like rights”) —to a higher court. Why is this story significant?

And activist groups like the Nonhuman Rights Project are pushing for animals to be granted personhood and certain civil rights that only humans have.

Well, there’s no denying that human life is increasingly being devalued in our culture (e.g., abortion, euthanasia, embryonic stem cell research, gene editing, the genocide of those with disabilities, etc.), while animal life is increasingly being exalted above the value of humans. And activist groups like the Nonhuman Rights Project are pushing for animals to be granted personhood and certain civil rights that only humans have. This, of course, stems from the evolutionary view that all of life is related and that we’re just animals. For example, if you visit the group’s website, you’ll immediately see this:

Humans are not the only animals entitled to recognition and protection of their fundamental rights.

Of course, this raises the question of what are “fundamental rights” (they mention rights such as liberty, autonomy, equality, and fairness), and who decides? Who gives “rights”? Well, in a biblical worldview, God has given us—humans—certain rights. He has not given those rights to animals, although we are called to care for creation and steward it wisely and kindly. And one of those human rights (discussed below) is to rule over (i.e., have dominion over) the animals.

Interestingly, on the group’s website is a section titled “how we select our clients.” “Potential” clients (although their “clients” don’t ask for their help because, after all, they are apes and elephants) include “individual great apes, elephants, dolphins, and whales living in captivity across the US.” Why these specific animals and not goldfish, rabbits, or cats? Well, their potential clients:

[A]re members of species for whom there is ample, robust scientific evidence of self-awareness and autonomy—qualities the common law already purports to value where humans are concerned. We view these qualities as sufficient, but not necessary, for recognition of common law personhood and fundamental rights. In other words, self-awareness and autonomy are a starting point for our long-term litigation campaign: the most effective starting point, in our view.

In other words, they are starting with the idea that animals have “self-awareness and autonomy”—two features they believe grant great apes, elephants, whales, and dolphins personhood. But is that what determines our personhood?

No. This is where a biblical worldview is so key. Yes, many animals are smart; some have an amount of self-awareness and can, in a sense, communicate certain things with others (even humans) and have their own unique personality. But only humans are able to use complex language to communicate and think abstractly. While some animals can use certain items as tools, only humans can use tools to make tools. But those characteristics are not what make humans persons. What makes us unique is described in Genesis 1:27:

We as image bearers of God are distinct from the animals—in fact, we’re specifically given dominion over them!

God blessed them and said to them, “Be fruitful and increase in number; fill the earth and subdue it. Rule over the fish in the sea and the birds in the sky and over every living creature that moves on the ground. (Genesis 1:28)

This is not a harsh rule—the testimony of Scripture is that God cares for creation, so we, as his image-bearers and those given the charge to rule over it, should also care for creation. So, yes, we have dominion over great apes, elephants, dolphins, and whales—they are not our equals, nor do they have dominion over us.

This item was discussed on Answers News with cohosts Dr. Georgia Purdom, Dr. Jennifer Rivera, and Tim Chaffey. Answers News is our twice-weekly news program filmed live before a studio audience here at the Creation Museum and broadcast on my Facebook page and the Answers in Genesis Facebook page. We also covered the following topics:

Watch the entire episode of Answers News for January 4, 2021.