Photo by Charisse Kenion, via Unsplash. 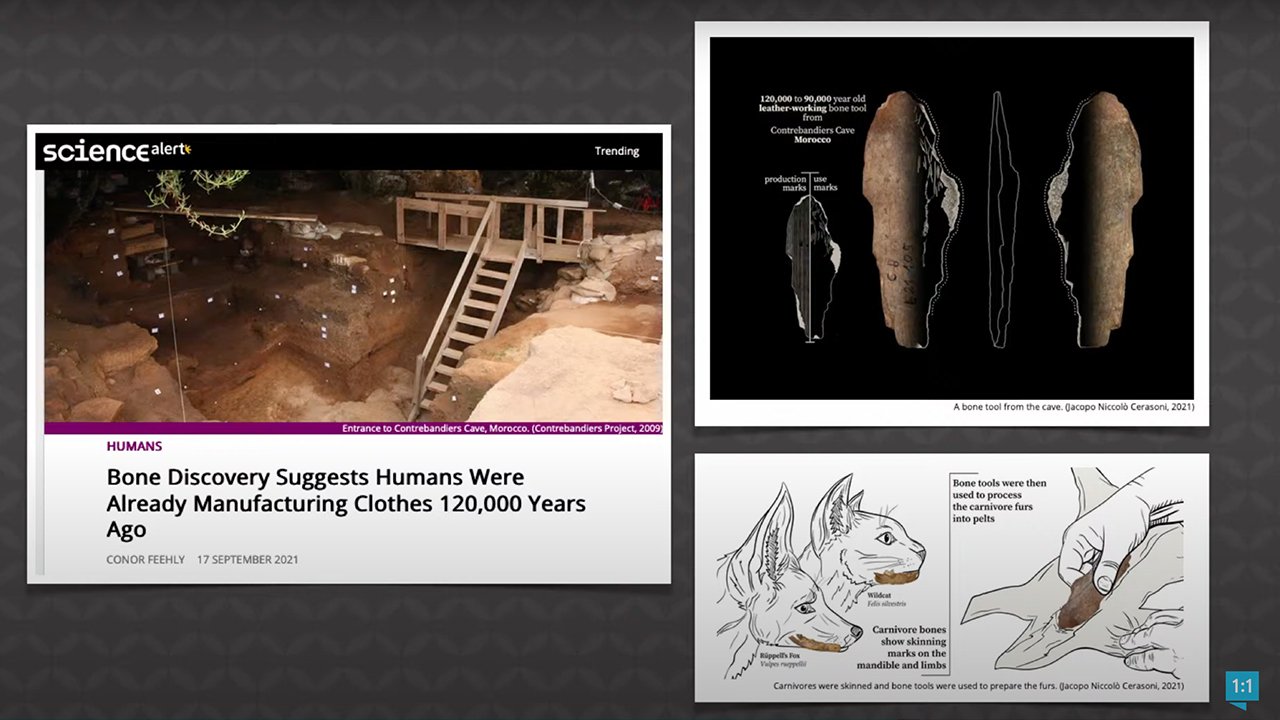 Clothing is a ubiquitous part of our lives, but when did it first originate? Well, that depends on your worldview. Secular evolutionists must explain everything in light of their atheistic worldview of millions of years and slow and gradual evolution, concluding that, at some point, humans evolved the intelligence to fashion clothes from animal skins and other available materials. But is this what happened?

Well, a new study of artifacts found in a cave in Morocco is being hailed as the earliest evidence humans were making clothes. Bone fragments, believed to be 120,000 years old, appear to be tools used to process leather, perhaps to make clothes (but the researchers note the tools may have been used to make bags or other items from the leather). Other bones, from Rüppell’s foxes, golden jackals, and wildcats, show evidence of having been skinned, not for meat, but for fur. So perhaps the humans making a home or taking shelter in this cave were wearing fox, jackal, and wildcat fur to keep warm.

Bone fragments, believed to be 120,000 years old, appear to be tools used to process leather, perhaps to make clothes (but the researchers note the tools may have been used to make bags or other items from the leather).

Now, this study is no problem within a biblical worldview (though, of course, we reject the 120,000-year date as it contradicts the history revealed in God’s Word)—humans making clothes, or other leather items, is exactly what we’d expect. But this doesn’t show humans invented clothes 120,000 years ago because we know when and how clothing was invented—we have an eyewitness account of the event!

[The woman] took of its fruit and ate, and she also gave some to her husband who was with her, and he ate. Then the eyes of both were opened, and they knew that they were naked. And they sewed fig leaves together and made themselves loincloths. (Genesis 3:6–7)

And the Lord God made for Adam and for his wife garments of skins and clothed them. (Genesis 3:21)

Clothing was invented not because we were cold, as evolutionists suggest, but because of sin and shame.

Clothing was invented not because we were cold, as evolutionists suggest, but because of sin and shame. Mankind was originally created naked and unashamed, but after their sin, they tried to cover over that sin and shame with fig leaves. But God himself made them clothes when he killed an animal—the first animal death in God’s “very good” creation. These clothes, and the sacrifice and spilled blood of that animal (or animals), covered over their sin and shame.

Then, as you go through the Old Testament, you will read of sacrifices of animals being offered over and over again, but such sacrifices were unable to take away our sin (Hebrews 10:4). We needed a descendant of Adam like us to die in our place—but it can’t be one of us, since all have sinned (Romans 3:23)! That’s why God took on flesh, lived the perfect life we can’t live, and died on the cross in our place, rising from the grave three days later.

The origin of clothing is so much more amazing than humans stumbling upon leather one day: it’s a picture of the gospel message, pointing us to the one who would one day take away the sins of the world through his death and resurrection (John 1:29). To receive that free gift of salvation, we must repent and believe (Romans 10:9).

And as an aside: the origin of clothing is yet another way the evolutionary story and the biblical account of history clash.

And as an aside: the origin of clothing is yet another way the evolutionary story and the biblical account of history clash. You can’t harmonize the two! The Bible—the history book of the universe written by the Eyewitness to creation—is the true account of history, and evolutionary ideas are just fairytales.

And think about it! If clothes were invented because humans were cold, does that mean when it gets hot, it’s ok not to wear clothes? Would evolutionists all agree on that? From an atheistic worldview, morality is subjective and ultimately means anyone can do whatever they want, if they can get away with it!

This item was discussed today on Answers News with cohosts Bodie Hodge and Roger Patterson. Answers News is our twice-weekly news program filmed here at the Creation Museum and broadcast on my Facebook page and the Answers in Genesis Facebook page. We also covered the following intriguing topics:

Watch the entire episode of Answers News for September 27, 2021.