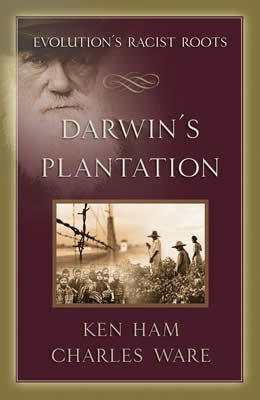 Author Ken Ham and theologian Dr. A. Charles Ware take a groundbreaking look at one of the human race’s greatest problems—racism—in Darwin’s Plantation: Evolution’s Racist Roots. Along the way, they also tackle the questions of the origin of all the people groups, skin “color,” and interracial marriage.

Ham is the president of Answers in Genesis and the new Creation Museum, ministries that uphold the authority of the Bible from the very first verse. Ware is Executive Director of Grace Relations and Special Assistant to the President of The College of Biblical Studies, and a national leader in promoting multiethnic ministry.

With Darwin's birthday coming February 12, and his 200th birthday and the 150th anniversary of the publication of On the Origin of Species little more than a year away, the time seems right for an accurate assessment of his legacy.

Ham and Ware show that although racism certainly did not begin with Darwin, his beliefs did more to fuel racism than the ideas of any other single individual. “Racism is a consequence of sin in a fallen world infused with evolutionary thinking,” Ham writes.

The subtitle of Darwin’s Origin of Species is “The Preservation of Favoured Races in the Struggle for Life.” Darwin himself writes in The Descent of Man that he would rather be descended from a monkey than a “savage.”

Even Stephen Jay Gould, the late leading evolutionist, agreed that the publication of “Origin of Species” had a negative impact on the discussion of racial issues. “Biological arguments for racism may have been common before 1859, but they increased by orders of magnitude following the acceptance of evolutionary theory,” he wrote.

Ham and Ware note that evolutionary theory made its way to American shores during the time of the Civil War and the Emancipation Proclamation (the 1860s).

“Without the legal ability to enforce slavery, many people turned to the theories of Darwin to justify racism in its many forms,” the book says. “They began to use evolution as justification of their views that African-Americans were an inferior “race” and a “subspecies” that was not really fully human and not deserving of fair and equal treatment.”

Ham, originally from Australia, studied environmental biology at the Queensland Institute of Technology. He notes that the remains of perhaps 10,000 Aborigines, some slaughtered as “specimens,” were shipped to Britain to prove that they were the “missing link.”

Perhaps most tragically, Hitler used evolutionary thought to justify his concept of a “master race” and the extermination of the Jews and other so-called “inferior” groups of people.

“As soon as one believes that human beings have evolved from creatures of lesser intelligence, it is an easy corollary to assume that some people groups are more evolved than others,” the book says.

The book is not about assigning blame. Instead, it sets out a Biblical blueprint for harmonious race relations.

Ultimately, though, the book is not about assigning blame. Instead, it sets out a Biblical blueprint for harmonious race relations. In fact, with man’s history of racial conflict, the authors say that “GRACE (God’s Reconciliation At Christ’s Expense) relations” provides a much better model than race relations. This concept mirrors the teaching found in a compelling exhibit inside the Creation Museum on the origin of the different people groups.

Ware adds, “Darwin’s Plantation presents the scientific and Scriptural case for the origin of the so-called races and of their skin color and eye shapes, plus what the Scriptures teach about still-controversial issues like interracial marriage.”

The authors paint a picture of a world where churches are multiethnic and interracial marriage is no longer a problem. How can this happen? According to this book, it can only happen when Christians accept the Bible’s truth that there is only one race—the human race (Acts 17:26; Genesis 1).

Answers in Genesis is a biblical apologetics ministry which conducts more than 300 teaching meetings each year, hosts an award-winning Web site and produces the “Answers” radio program heard on more than 900 stations throughout the United States. The high-tech Creation Museum, which opened in May, has seen over 300,000 visitors in less than eight months of operation.