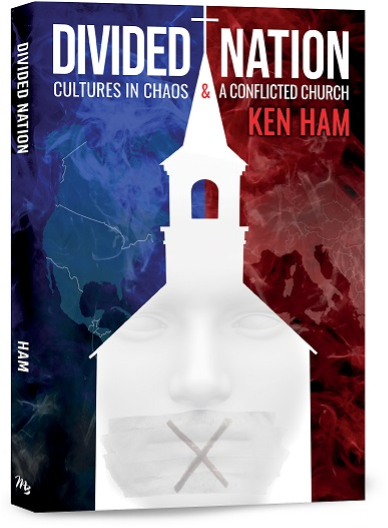 With the subtitle “Cultures in Chaos and a Conflicted Church,” Ham’s book recognizes that an accelerating division is happening throughout America. Western culture, he writes, is becoming more secularized and anti-Christian, with religious persecution against Christians on the rise. At the same time, many church leaders have become secularized in compromising with the culture. Amidst such church-culture compromise, Ham asks (and answers) the question: “As church attendance has dropped significantly, why have younger generations been leaving?”

In “Divided Nation,” Ham, the founder and CEO of the apologetics organization Answers in Genesis, shares from his heart of a “burden to help the church equip God’s people to defend the Christian faith, proclaim the gospel with boldness in a way people will listen to and understand, and raise up godly generations who will continue a godly legacy.”

A Bolder Approach in Cultural Engagement

With a new administration in Washington, Ham declares that Christians must now be bolder than ever in engaging the culture regarding hot-button topics like abortion and gay “marriage.” He also urges believers to learn how to communicate in a loving way so that teaching from the Bible does not come across as hate speech. “Divided Nation” presents advice based on the Bible and Ham’s own experiences, including when he spoke on the campus of the University of Central Oklahoma and the audience, which included a number in the LGTBQ community, listened intently and respectfully to Ham’s presentation on the culture divide.

Ham offers Christian families and churches a biblical mandate to awaken and become major influencers in today’s turbulent culture. He urges the Church’s next generation to take a bold stand regardless of increasing religious persecution and encourages families and churches to train young people in biblical truth. Ham ultimately calls for a new Reformation that will get Christians back to the authority of the Word of God beginning in Genesis.

Ham is well known outside Christendom for the highly popular Ark Encounter themed attraction (with a full-size 510-foot-long Noah’s Ark), the high-tech Creation Museum, and his famous debate in 2014 with Bill Nye “The Science Guy,” watched conservatively by at least 25 million people. Ham is the author or co-author of more than 25 books, covering such varied topics as dinosaurs, racism, raising a godly family, and evolution vs. creation.

Heavily illustrated with colorful artwork, Divided Nation is published by Master Books, a division of New Leaf Press, and at 160 pages retails for $15.99. The book’s illustrations are free for the public to use and can be retrieved at www.AnswersInGenesis.org/go/nation.

Answers in Genesis is an apologetics (i.e., Bible-upholding) ministry based in Petersburg, Kentucky, with the Creation Museum next door. The museum’s sister attraction, the Ark Encounter in Williamstown, Kentucky, is hosting the world’s largest Christian music festival, “40 Days and 40 Nights of Gospel Music at the Ark,” August 2–September 10, 2021. For more information on the two attractions, which continue to follow state COVID guidelines, see CreationMuseum.org and ArkEncounter.com.