With the reopening of the Creation Museum today, a totally refurbished Stargazer Planetarium inside the museum awaits guests. After almost three months of closure due to the COVID-19 pandemic, the museum reopens today, as does its sister attraction the Ark Encounter in Williamstown, Ky.

Ken Ham, CEO of Answers in Genesis, the ministry behind the Creation Museum and the Ark Encounter, said, “I’m thrilled we can open our doors once again to visitors. Also today, we can showcase the museum’s new state-of-the-art planetarium. It joins the other major museum upgrades we’ve been working so hard to complete over the past two years. With two high-tech laser projectors, tilted dome, and more seating, the Stargazer Planetarium is a highlight of our upgrades and is definitely a must-see for all museum visitors.”

Slightly bigger than its predecessor, the planetarium is part of a massive refresh of the world-renowned attraction in northern Kentucky.

For thirteen years, the older planetarium had been visited by millions of guests. The new planetarium is even better with its stunning visuals. Slightly bigger than its predecessor, the planetarium is part of a massive refresh of the world-renowned attraction in northern Kentucky. The Creation Museum continues to upgrade and add new exhibits, including a unique 4D theater experience that opened almost two years ago. The first third of the museum’s 75,000-square-foot space—featuring striking new exhibits and videos—opened late last year. These new museum enhancements were entirely funded by donations from thousands of generous supporters. The cost of building the new planetarium alone was $1.2 million. 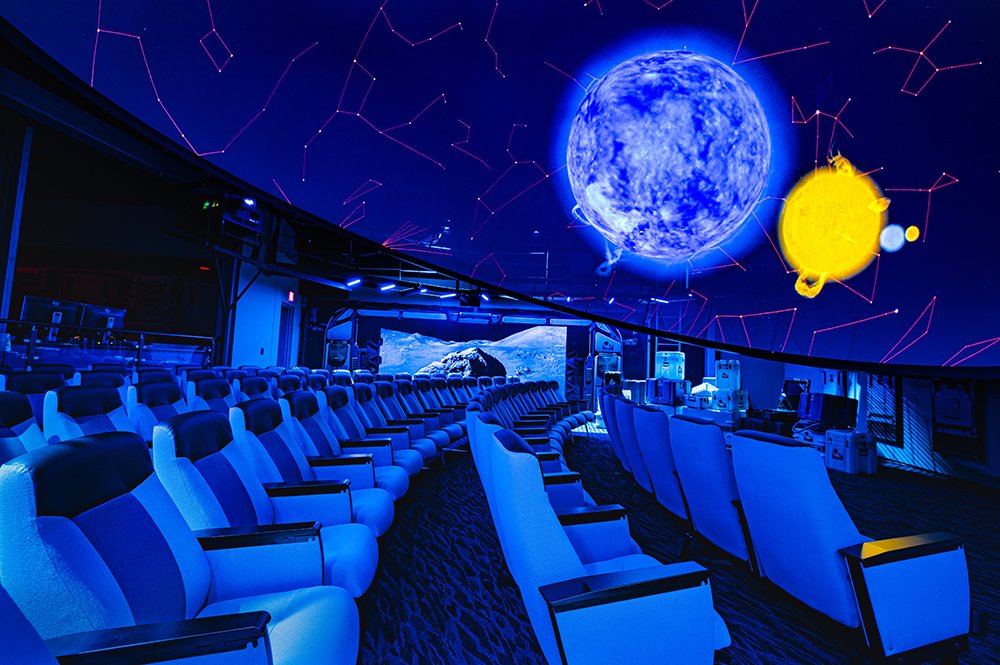 With the necessary upgrade of a totally rebuilt planetarium, the stars that are depicted are much brighter and the contrast is sharper and crisper on the new tilted dome, along with a new surround-sound system. Its 81 unique seats were made in Norway especially for the planetarium, and several more people can now be accommodated. (Over the next few weeks, seating will be limited to comply with social distancing guidelines.) The museum will also have some capabilities for new shows and other special events.

The planetarium is a separate admission to the museum. Programs will be shown throughout the day.

Ken Ham noted: “The planetarium’s theater looks amazing. For example, guests will think they are sitting in a spacecraft and looking out on the moon’s surface. The picture quality of the planetarium show is quite remarkable. We’re excited that our guests will discover how the heavens declare the glory of our Creator as they learn more about his handiwork in this state-of-the-art planetarium.”

The museum’s astronomer, Dr. Danny Faulkner (PhD, Indiana), declared: “The new laser light source is far brighter than the bulbs in the old projectors. Consequently, there is a much more realistic difference between the brighter stars and the fainter stars. In our new planetarium, the planets and stars pop out more like they do in the real sky.”

On some evenings, Dr. Faulkner will conduct special stargazer events.

On some evenings, Dr. Faulkner will conduct special stargazer events. They start inside the planetarium and then move outside to use the museum’s high-power telescopes inside the Johnsonian Observatory, where visitors study the night sky.

Regarding the many new enhancements at the Creation Museum, Ham added, “I’m also thrilled to watch the progress of the construction of our ‘Fearfully & Wonderfully Made’ pro-life exhibit which will be opened in the summer as part of our ongoing efforts to continually upgrade the museum and present new content.”

The planetarium was completely funded in January, just before the COVID-19 pandemic struck America. As the museum and new planetarium open today, they are following the procedures summarized on the website and in a detailed, robust 45-page “COVID-19 Preparedness Plan.” Both attractions have expansive gardens and outdoor zoos, so they can also handle many visitors outdoors, as well as indoors with social distancing guidelines applied.

In its reopening plan, AiG also demonstrates that its themed attractions will conduct temperature tests of staff, regularly clean and sanitize its facilities, outfit its employees with masks, and engage in other safety practices.

Next month, a $3 million high-tech virtual reality experience, Truth Traveler, will open at the Ark Encounter. Earlier this year and before the shutdown, the Ark Encounter and Creation Museum finished first and second in USA Today’s “10Best Readers' Choice Awards” as the best religious museums in the United States, out of 20 nominees.

Answers in Genesis is an apologetics (i.e., Bible-defending) ministry based in northern Kentucky, near Cincinnati, and employs 1,000 full-time and seasonal/part-time staff. The Ark Encounter opened in 2016 and features a 510-foot-long Noah’s ark. West of the Cincinnati Airport and next to the AiG headquarters, the Creation Museum has welcomed well over 4 million visitors and has become a major family attraction in the Midwest. For more information on the two attractions, visit CreationMuseum.org and ArkEncounter.com.