Will Encourage More Children and Youth to Visit

Starting tomorrow, March 1, the popular Christian-themed attractions the Ark Encounter and the Creation Museum are restructuring their ticket pricing to encourage even more families to visit with their children and youth.

The announcement highlights the goal of these two world-class attractions of Answers in Genesis (AiG): to help more families, churches, schools, and other organizations bring as many children and youth as possible to the Ark and museum. AiG is introducing a special youth category not previously available.

AiG is effectively offering group pricing for each youth ticket and child ticket at its Northern Kentucky attractions. Rather than giving group discounts to school groups, youth groups in churches, and so on, AiG is essentially giving all young people and kids a “group price.” With the goal of reaching more of the next generation, AiG is announcing the following new ticket pricing:

Every ticket to the Creation Museum remains a two-day pass. Starting March 1, however, the attractions have done away with the weekly unlimited pass; instead, they will now offer a relatively inexpensive annual combo pass (see prices above), structured to appeal to families to bring as many children and youth as possible.

Many of our visitors have told me that the quality of our Christian-themed attractions exceeds what they’ve experienced at the Disney parks, Universal Studios, and the Smithsonian museums. AiG’s Christian-themed parks are also captivating and entertaining, but most of all they present serious, life-changing Bible messages.

The Ark Encounter and Creation Museum feature spectacular exhibits and programs that both challenge and educate. Tickets for both attractions include entrance to stunning exhibits, zoo (and petting zoos), gardens, and many special programs each day (concerts, lectures, films, and so on). In addition, guests continue to praise the quality and price of food at the attractions.

Guests from around the world, of all ages, rave about what they have experienced at the Ark Encounter and Creation Museum. Ham added,

Not only are the attractions a great financial value, there’s spiritual value gained by our guests. I’m thrilled to see so many of our visitors respond to the messages we proclaim, even as they enjoy themselves in immersive experiences.

Disney’s parks and AiG’s attractions are, in a sense, competing for a family’s time for vacation, offering the best possible quality in all they and we do. However, you can spend many hours waiting in long lines for short rides at amusement parks. At our Ark and museum, however, you can easily spend a full day or two at each location, experiencing edu-tainment all day and rarely standing in a long line. 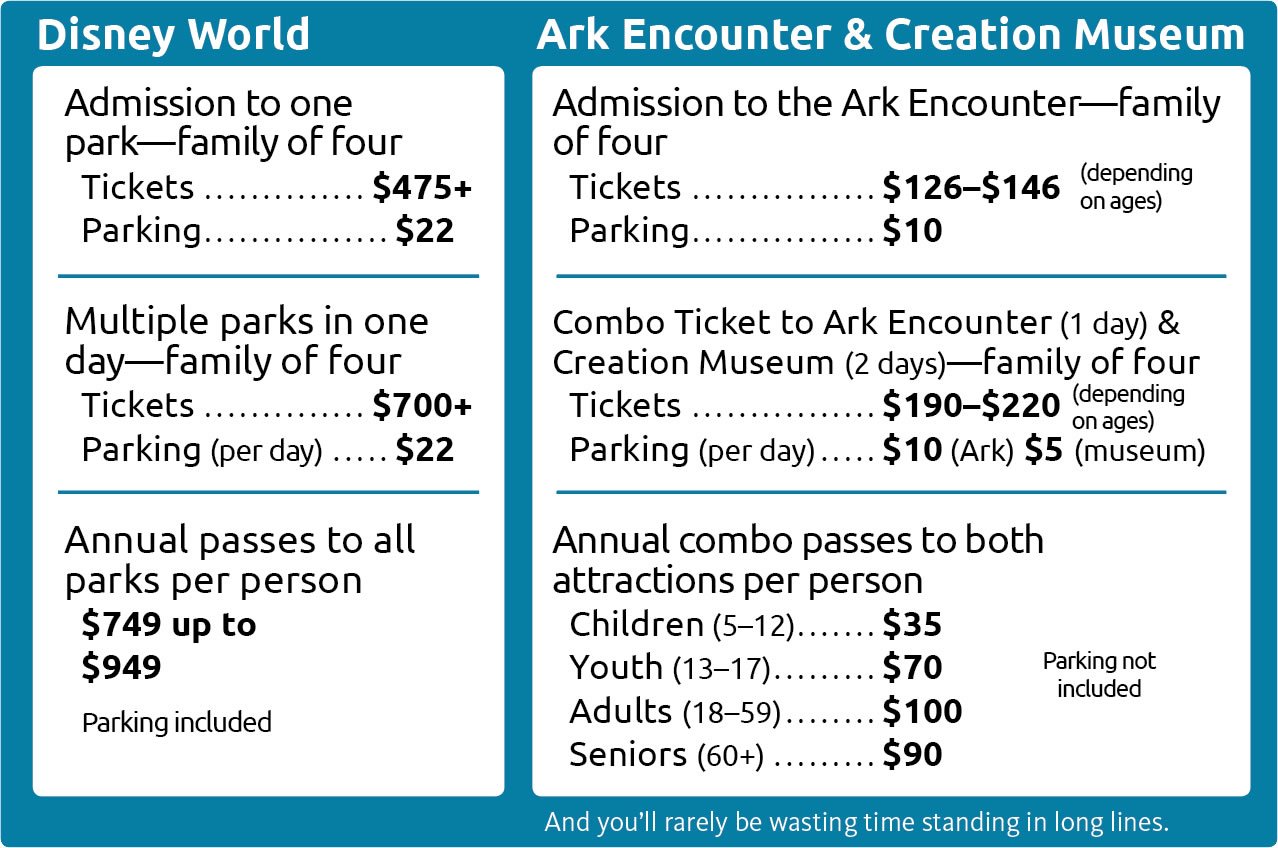 The youth and child pricing is unlike most major themed attractions, where they sometimes charge adult pricing above the age of 12. Furthermore, at AiG’s parks, children 4 and under are free; many other attractions charge for children 2-4 years old. Meanwhile, adult prices have been increased, but AiG makes no apology for a deliberate attempt to favor children and youth in order to get more of them to visit.

Also available at the two parks at an additional cost are thrilling zip lines (the biggest and best in the Midwest), camel rides, specialty workshops, planetarium shows at the Creation Museum, and more.

Answers in Genesis is an apologetics (i.e., Bible-defending) ministry based in Northern Kentucky, near Cincinnati. In 2016 AiG opened the Ark Encounter, a one-of-a-kind Christian themed attraction with a massive Noah’s Ark in Williamstown, Kentucky, which draws up to 8,000 guests in a day. The Creation Museum, located west of the Cincinnati Airport, has welcomed 3.5 million visitors and has proved to be a major family attraction in the Midwest. For more information, visit AnswersInGenesis.org.