Come away from the Edge!

Get the Reality Series on DVD
Shop Now
by Libby Wild and Hudson Wild on November 16, 2017

On our side of the mountain, there lives a man who would be cast away and forgotten by most. His net bag he uses as a head covering has blended in with his hair and soot from the fire has melded the two together. His eyes are clouded over, and he can see very little.

Years ago in 2010, when we first started teaching the Bible, beginning in Genesis and continuing on through the Bible, this man refused to come. We missionaries encouraged him, the Wild brothers pleaded with him, but he said he could hear just fine from his house that was about 100 meters away.

His heart seemed cold, and I truly believe he was and still is in bondage to spirits that want to utterly destroy him.

Eternity is always a sobering thought for me to consider. In his present state, there is nothing that stands between him and an eternity apart from God. He has turned his back on truth, and in this world he has nothing to hold on to. He no longer has his strength, his sight, nor his youth. His days seem short, so Mike decided to take a trip to see him a few weeks ago.

He was squatting in the grass when Mike walked up and sat next to him. He stared ahead and did not respond when Mike greeted him. After a moment, people around him told him Mike had come. He jumped up disoriented and scampered off to a tall grassy area near a drop off. One of the men who walked down with Mike went over to where he was and said:

Father, you shouldn’t do that. You cannot see, and yet you jumped up and ran over to this dangerous place. You could have fallen off this drop off. Just as you blindly stumbled to this dangerous area where you could have fallen, spiritually you are in the same situation. You are nearing the end of your life and the deceiver has lead you to the edge of a cliff and desperately wants you to fall and forever be separated from God. I came after you to guide you from this steep edge back to your house. In the same way, Mike has come to remind you of what it means to die without hearing the message of truth from the Bible and turn you from your present course of destruction. 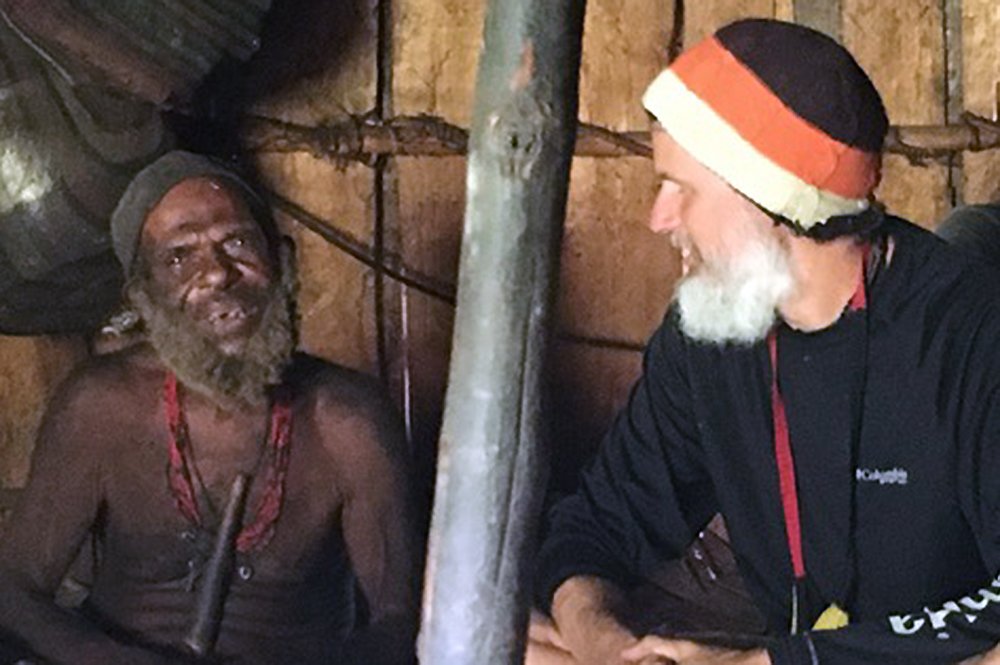 They told old Grandpa that he needs to change his mind and listen to the truth while he still has a chance.

For the love of Christ controls us, because we have concluded this: that one has died for all, therefore all have died; and he died for all, that those who live might no longer live for themselves but for him who for their sake died and was raised.

From now on, therefore, we regard no one according to the flesh. Even though we once regarded Christ according to the flesh, we regard him thus no longer. Therefore, if anyone is in Christ, he is a new creation. The old has passed away; behold, the new has come. All this is from God, who through Christ reconciled us to himself and gave us the ministry of reconciliation; that is, in Christ God was reconciling[b] the world to himself, not counting their trespasses against them, and entrusting to us the message of reconciliation. Therefore, we are ambassadors for Christ, God making his appeal through us. We implore you on behalf of Christ, be reconciled to God. (2 Corinthians 5:14–20)

It is sweet to see how our tribal brothers and sisters in Christ are living out the Word of God before us. We all know someone who is living on the edge of eternity without the truth that can save them from utter destruction. Let this be a reminder for us. We ought to be doing what the Lord has clearly commanded us to do. We have all been given the ministry of reconciliation because Christ reconciled us to himself. Let us be good ambassadors representing Christ’s message to those in need!

Previous Article They Call It Progress Next Article Jesus Is Worthy