Get the Reality Series on DVD
Shop Now
by Mike Wild on October 12, 2017

Lately I have been reading and studying through the book of Acts. In Acts, after Jesus’ followers received the Helper, they were emboldened and empowered to teach truth and do many miracles. As Jesus’ miracles validated that he indeed was the Messiah, the apostles’ miracles done through the power of the Holy Spirit also validated their message. They were preaching that Jesus was in fact the promised Redeemer! The Jewish leaders had the Romans murder him by crucifixion, yet they had witnessed his Resurrection and ascension to heaven. And those who put their faith in the risen Jesus were given the gift of eternal life!

As the apostles boldly preached this message, they healed those who were sick and cast evil spirits out of those who were possessed. No one could do such amazing things unless God was with them, and as many people realized this, they believed the message and gratefully put their faith in the Lord Jesus as the Christ! Thus, the church age began.

Fast forward 2,000 years to today. My family has lived among remote tribal people for 12 years now. When we first entered the tribe, the animistic tribal people worshipped and feared evil spirits. Now many years later, things have drastically changed as we have been teaching from the Bible, translated much of the New Testament into their language, and have spent countless hours discipling the Christ followers. Years ago we also developed a literacy class and now many men, women, and children can read God’s Word in their own language. The Lord has used this to mature the believers here, and many have become Bible teachers and taken the message to far-flung hamlets.

The other day I was talking to a young Bible teacher who had been on one of the recent outreaches to a very distant hamlet. He told of a miraculous thing that God did not only to save his life but to bring great reverence to the message that they were teaching.

Pengguci was high up in a tree (maybe as high as 30 feet off the ground from what he described to me). The villagers had cut down a large jungle tree, but it fell into the fork of another tree, and Pengguci was sent up to cut the top off the tree so that they could pull it out of the fork and to the ground. Pengguci had already cut off many heavy limbs with his ax, and, as he was finishing the tiring work of cutting the top section off the tree, it began to give. Pengguci found himself falling to the ground.

Thirty feet below him were his friends who looked up in terror as he began to fall. Around them on the ground were the jagged remains of wood that they had been busy chopping up. Still in the air, Pengguci instinctively reached out and caught a rattan vine that he had been using to help secure branches that he was cutting. The vine held fast, and he reached over with his other hand to grab the vine. Somehow as he made his grip fast, he made it to the ground with a soft thud. Immediately behind him the vine coiled to the ground. The top had been tied to a tree branch, but it was from a branch that had already been cut and the vine end had been removed. So, according to Pengguci, the vine was not attached to anything at the top! But somehow it held, and he made it to the ground. In Pengguci’s words, “Yahweh was holding the other end of the vine and allowed me to get to the ground.”

As Pengguci stood safely on the ground, the local villagers were in shock. Never before had they seen such a miracle. Falling from such a high tree would always result in broken bones or death. Pengguci quickly gave glory to God. He told the villagers that the same God that they were learning about was the same God who had saved him from his fall. He told them that they must continue listening to the teaching so that they too could know about him and the message of salvation. 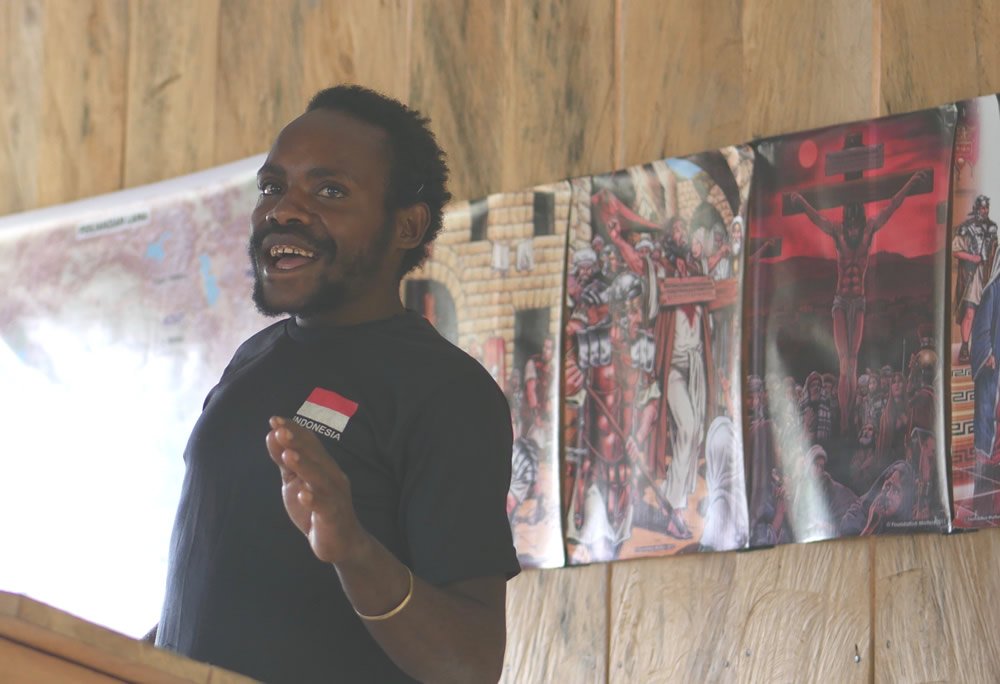 Weeks later as Pengguci and Dugwiru (the other Bible teacher) finished up the chronological Bible lessons, many of the villagers put their faith in Jesus as their savior! God used his powerful Word to convict their hearts, and he also used the miracle of saving Pengguci from the fall to validate that what they taught was the one true message!

What a beautiful thing that God still performs miracles among us to validate his message. As it was in the days of the early church, so it is today in places where the gospel is just now taking root. God shows that he is not only powerful but also mighty to save!