Get the Reality Series on DVD
Shop Now
by Mike Wild on September 7, 2017

The other day, Madukumi, the village grandma, pulled out a dusty moth cocoon from her worn net bag. These cocoons have a soft, silky lining and are used as a carrying case for a very special prize. She carefully pinched along the cocoons length, pushing the contents out the open end. Out came two pieces of shell money.

Up until pretty recently, shell money was used to buy pigs and wives. Madukumi went on to explain to us that each of these shells could be used to buy a good-sized pig, which has a worth of about $500. Back in the day, these shells were traded among tribesmen from the coastal areas, through the lowland swamps and sago groves, up into the foothills and finally arriving to the interior mountain people. The tribe that we now work among was known for their prized stone axes, which they would trade for the shell money. Stone axes, shell money, and a special type of natural salt were the three highest commodities up until the introduction of the steel ax head. 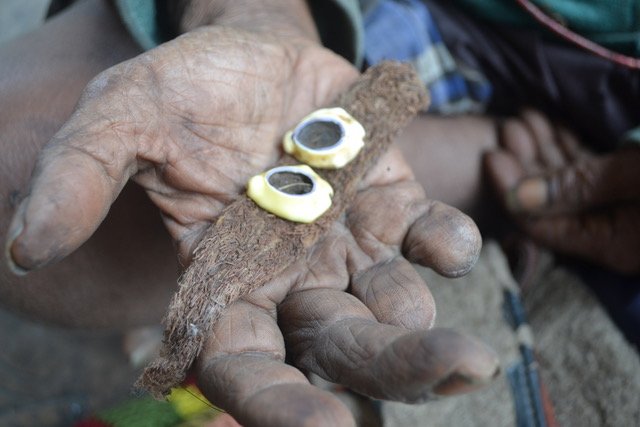 Seeing this shell money reminded me of how things have changed here. Some things have changed for the worse, and some things have changed for the better. If you notice in the picture, Madukumi is missing two of her fingers. When we moved into the village in 2006, it was common practice to chop off fingers as a sign of mourning, out of anger, or as a peace offering to malicious spirits of the dead. That has changed though. Today, our tribal friends have heard the truth of God’s Word clearly in their heart language, and they now see the folly of mutilating themselves for no good reason.

We have had the great privilege of seeing a community changed for the better because of God’s Word. It grieves us to see pressures from the government and the outside world changing their material culture, but the spiritual change in their hearts makes us want to leap for joy! We all live in a world that is constantly changing, and it’s OK to roll with these changes as long as we make sure that the one thing that does not change is our faith in God’s unchanging Word. Our tribal friends now have that firm foundation, and we know that God will keep them securely fastened to it as they look to the future and all its uncertainties.