A rainbow in the sky is meant to remind us of the promise the Lord gave to Noah, to never destroy the world again by flood. The rainbow then is meant to cause us to remember the holiness and justness of the Lord, as He punished the world because of sin. The rainbow also reminds us of God’s goodness and love, and of the fact that he always keeps His promises.

This is one example of how Satan the enemy has deceived all cultures in the world. He sometimes takes the good things from God and distorts them, deceiving people into believing they are things to be feared and hated.

I had the privilege of translating the verses about the Flood into the tribal language, and I remember well the day that I was sitting in my office with a tribal helper. His name was Maki, and after I read the portion in Genesis 9:8–16, I asked him about what he just heard. With wide eyes he retold pretty clearly the promise from the Lord to all mankind. After some more dialogue checking the comprehension about the section, I began to talk with him about the rainbow.

I said, “This talk from God is the true talk. Now you know the true meaning behind the rainbow. So when you see the rainbow in the sky, you don’t need to be afraid, but you can thank God that for his promise never to destroy the world again with a flood.”

At the very moment that I was sharing those thoughts, in the valley facing the south a giant rainbow appeared in the late afternoon clouds. Maki turned around, looked out the window, and his eyes got even bigger! “Oh Wow!” he said. “This is truly the true talk!” 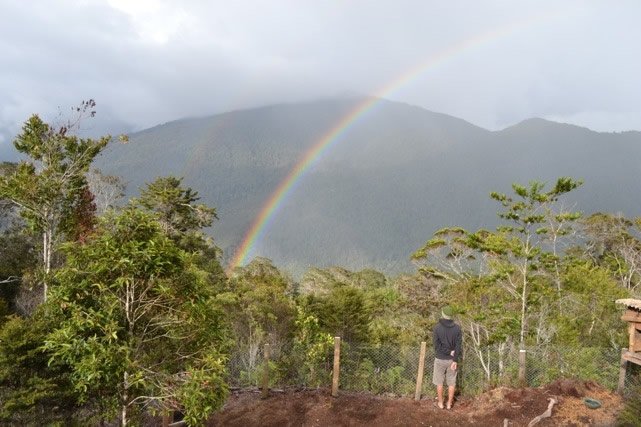 I still thank the Lord for that moment and others like that, when He validated His Word among the tribal people. Many tribal people later came to faith in the Lord Jesus Christ after hearing clearly the gospel in their own language. Unfortunately to this day, Maki has not shown much interest in God’s Word. He still comes around sometimes, but he is still trusting in the evil spirits. Please pray for Maki to remember how the Lord validated His Word to him that one day, and for others like Maki who have yet to put their faith in Christ.