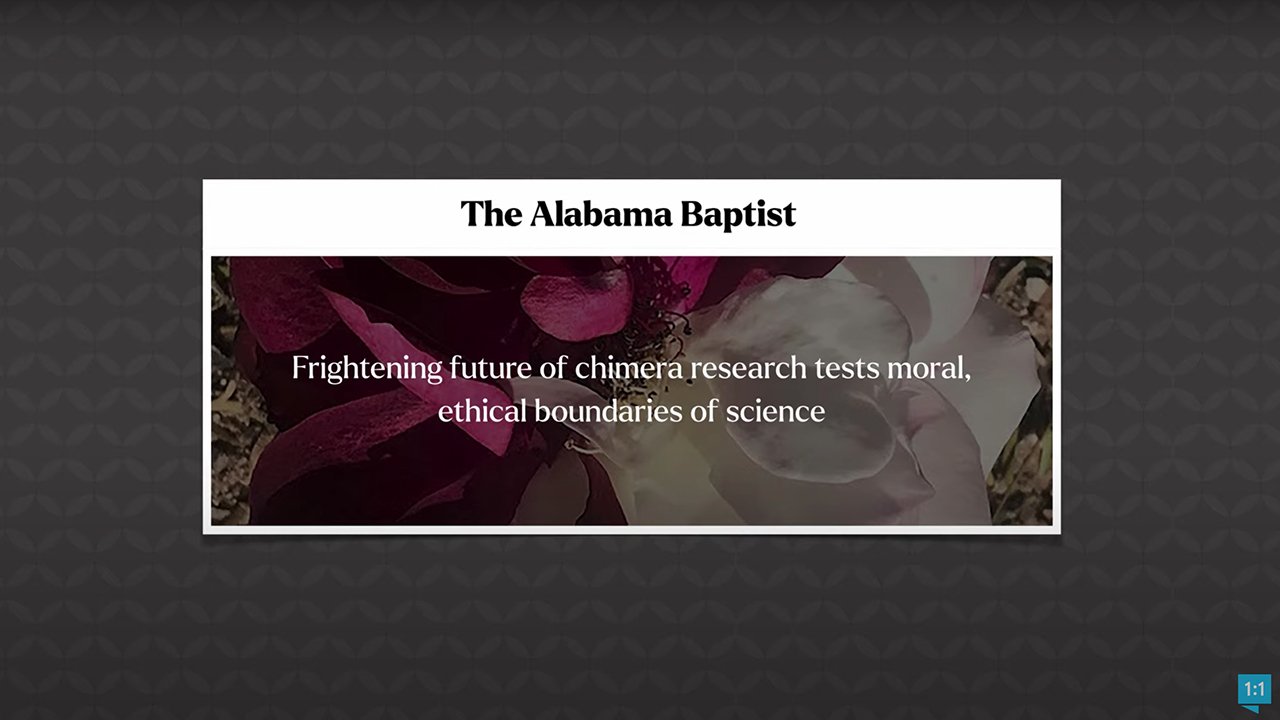 Just because we can, does it mean we should? Well, how you answer such a question depends on your worldview and the foundation that worldview rests on. What do I mean? Well, consider the question of “chimeras.” In science today, chimeras refer to human-animal hybrids. Many scientists are doing such research today, artificially combining human and animal cells. But should they be?

Well, the US Senate seems to think they should be. According to a recent article, “the Senate failed to pass an amendment … [in May 2021 that] would have banned chimera research in the U.S . . . thus allowing the nation’s scientists to compete with Chinese innovation.”

One of the Senators responsible for introducing the failed legislation (Sen. Mike Braun of Indiana) gave his reasons why he thinks such research ought not to be done:

Human life is distinct and sacred, and research that creates an animal-human hybrid or transfers a human embryo into an animal womb or vice versa should be completely prohibited, and engaging in such unethical experiments should be a crime.

But another Senator (Sen. Patty Murray of Washington) argued that such a ban “undermines scientifically significant research that could actually help develop new treatments and ultimately lead to lifesaving organ transplants.”

In this view, we aren’t endowed with anything special that makes us unique and valuable: we’re just animals. We experiment with other animals, so why not humans?

Now in the prevailing evolutionary worldview, Sen. Braun’s argument makes no sense—human life isn’t distinct or sacred. Rather, it’s just the result of random chance processes over millions of years that gradually turned us from pond scum into people. In this view, we aren’t endowed with anything special that makes us unique and valuable: we’re just animals. We experiment with other animals, so why not humans? And from that perspective, when you die, you cease to exist. So why bother anyway, as there’s no ultimate meaning or purpose for life?

But it’s worth noting that Sen. Murray’s argument proposing we need to do this research to help people also fails in a consistent evolutionary worldview. If we’re the product of evolution, there’s no moral reason to help and heal others. Nature operates by “survival of the fittest” and natural selection, so if the weak and sick don’t make it, tough luck—that’s how evolution works.

Just Don’t Gestate “Such a Thing”

Now, should we do this research? One bioethicist argues that “science may be pushing the ethical envelope and trespassing ethical boundaries yet uncrossed.” But he adds, “[A]s long as the embryo chimera stays in a laboratory dish, there shouldn’t be concern . . . but ‘if you actually try to gestate such a thing, particularly if you can bring it successfully to term, then the issues get more significant.’”

In a biblical worldview, we reject this kind of thinking—the human life in a petri dish is still a life, even if it hasn’t been implanted in a womb. So the issues are significant, right from the petri dish onward. And, of course, there’s no reason to believe that such experiments would stay “in the petri dish”—without an absolute authority, morality is relative. Today’s lines are quickly crossed tomorrow as the scientific research marches on (all in the name of the “greater good,” of course).

The secular worldview cannot consistently argue against chimeras, even though many in the scientific community are against it. Why? Because their standard is their opinion and is ultimately arbitrary. Sure, one scientist might think that, but another thinks something different, so who decides? Well, when there’s no ultimate authority, everyone does what’s right in their own eyes (Judges 21:25).

So how then should we think about this research? After all, chimera research might lead to new scientific discoveries, treatments, therapies, and even organ transplants that could help many people. Well, this is where we bring in the biblical worldview.

Chimeras are a “frightening future” because the research that is currently ongoing kills human lives in the name of maybe saving others, degrades humans, and attempts to artificially blur the line between the kinds God created. As Christians, we must continue to be advocates for life and human dignity in a culture that increasingly views human lives as dispensable.

I discussed this today on Answers News with cohosts Bodie Hodge and Tim Chaffey. Answers News is our twice-weekly news program filmed here at the Creation Museum and broadcast on my Facebook page and the Answers in Genesis Facebook page. We also covered the following intriguing topics:

Watch the entire episode of Answers News for August 30, 2021.