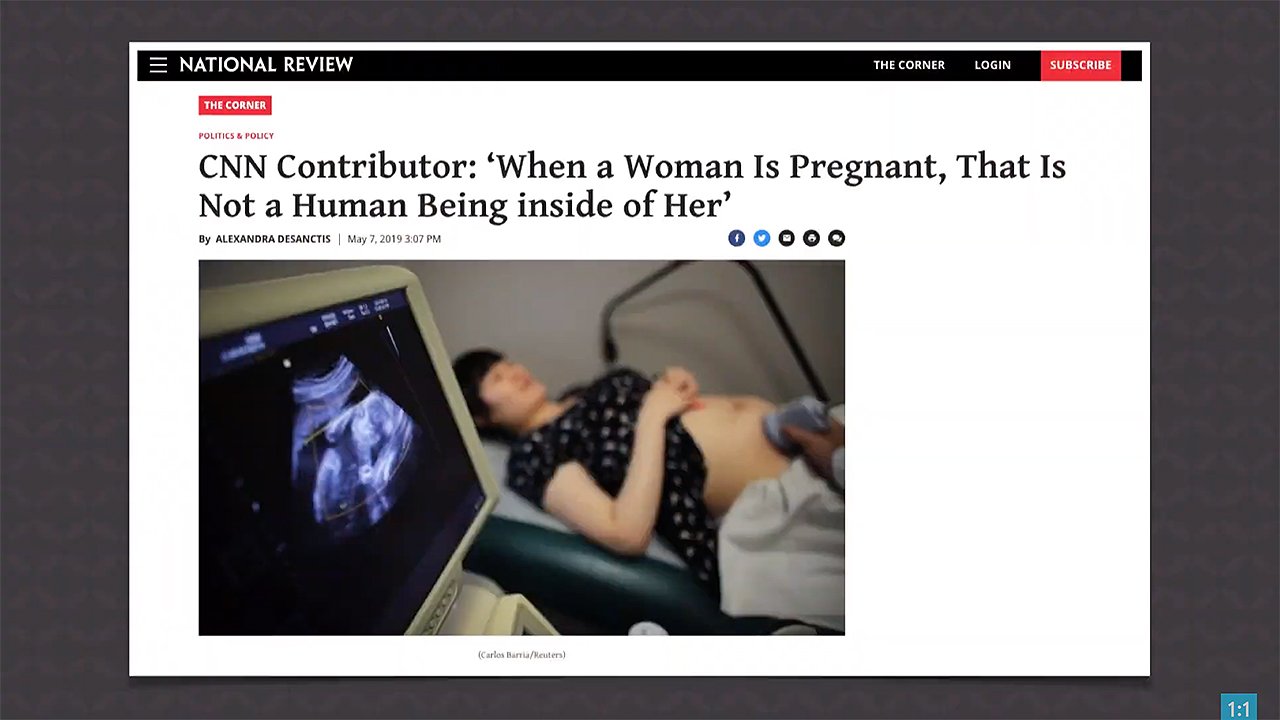 Here at Answers in Genesis, we’re often accused of being “anti-science” because we reject molecules-to-man evolution and millions of years (which are interpretations that flow from an atheistic, naturalistic worldview). But we’re not anti-science—we love science and understand that science always confirms God’s Word. Observational science has allowed us to have the great technology we use today, so of course we’re pro-science. But do you know who is often anti-science? Those who support abortion.

Christine Quinn, a board member of the National Institute for Reproductive Health and a former Democratic politician, recently appeared on a CNN TV show with host Chris Cuomo (brother to Andrew Cuomo, the governor of New York who recently signed a bill into law that allows for abortion up until the time of a baby’s birth). She appeared opposite Rick Santorum, a former US senator, to discuss the “heartbeat bill” that recently passed in Georgia that makes abortion illegal after a baby’s heartbeat can be detected. During her heated exchanged with Santorum, she stated,

When a woman is pregnant, that is not a human being inside of her. It’s part of her body. And this is about a woman having full control and full agency over her body.

So, an unborn baby is not a human being? What is it—a dog, a dolphin, a green bean? It has 100% human DNA (with a unique combination of information that came from both father and mother), and humans only produce humans, so the unborn baby can’t be anything other than a human! He or she is an individual. In fact, the woman’s body looks on this individual as foreign and would reject him or her, but God designed a mechanism to overcome this and welcome the individual for development. Quinn’s argument completely ignores biology, including genetics. It’s merely her attempt to make the evil of abortion—the murder of children—more palatable.

Part of a Woman’s Body?

So, if an unborn baby is just part of the woman’s body, then, when a woman delivers her baby, is she missing part of her body—a part with DNA unique to it? Does that part of her body eventually learn to walk, talk, and play, like a baby does?

And what if a woman never becomes pregnant: is she missing part of her body?

It’s very interesting that part of her body has:

Her claims go against everything we know from biology—humans produce humans.

Quinn’s argument is utterly preposterous! And yet it’s a common refrain from abortion supporters. Her claims go against everything we know from biology—humans produce humans. And since an unborn child—no matter the stage of development—has 100% human DNA (nothing is added from the moment of fertilization), it can’t be anything other than a human!

Ultimately, Quinn’s statements, like the comments of so many other abortion (i.e., murder) advocates, are anti-science. They espouse such absurd platitudes to shroud the truth—abortion destroys the life of a human being.

A baby is not part of a woman’s body. The baby begins life inside the woman’s body, but that is not the same as being part of the woman’s body. An unborn baby is a unique human being, made in God’s image, with value (Genesis 1:27). Taking that life is murder—no matter how abortion advocates try and frame it.

One more thing. Yes, we applaud people doing what they can to stop abortion with the so-called heartbeat bills or bills such as the one that just passed the Alabama Senate that effectively bans abortion in that state and criminalizes the procedure in nearly all instances. But, as far as heartbeat bills go, there’s no difference genetically among a human fertilized egg to the baby’s development, whether it’s one week, four weeks, six weeks, six months, nine months—all are the same unique individual at different stages of development: a 100% human being made in God’s image. Abortion at any stage is murder.

I discussed this item today on Answers News with cohosts Bryan Osborne and Avery Foley. Answers News is our twice-weekly news program filmed live before a studio audience here at the Creation Museum and broadcast on my Facebook page and the Answers in Genesis Facebook page. We also covered the following topics: