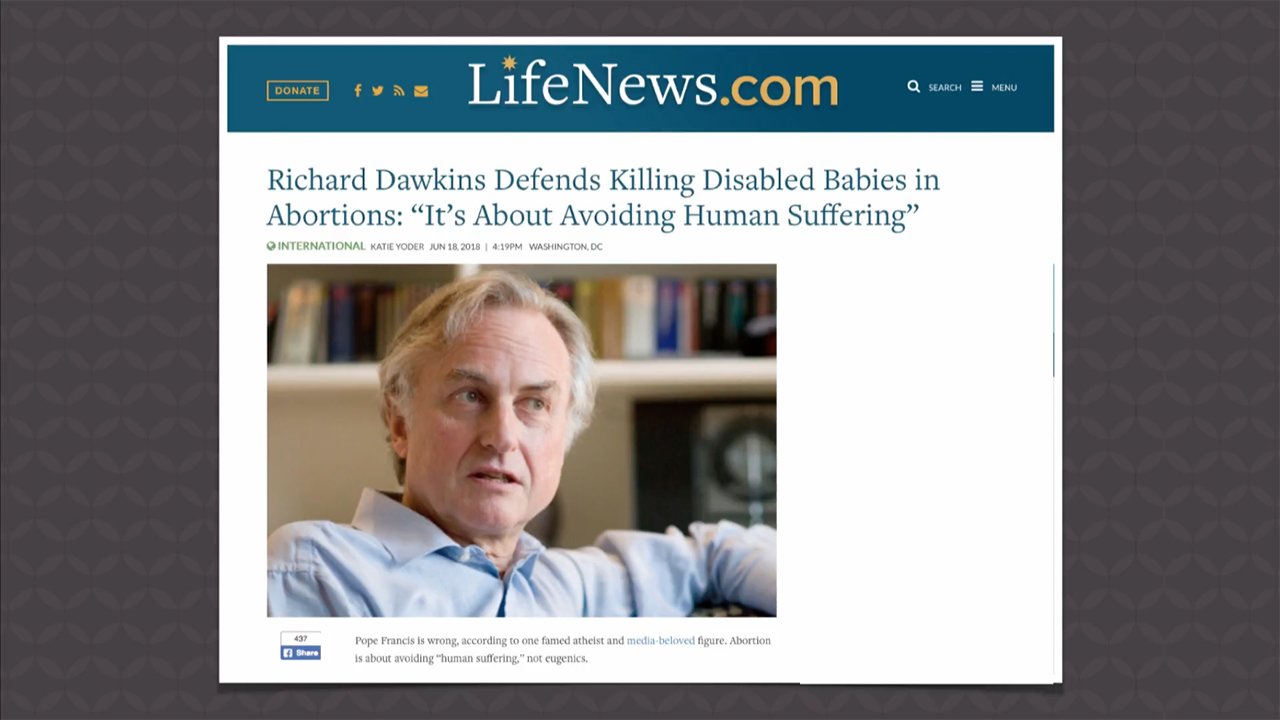 Should people be killed to avoid their suffering? That’s the position that famed atheist Richard Dawkins takes on the unborn, according to a recent tweet. This is not surprising considering some of Dawkins’ earlier tweets, as well as his atheistic and evolutionary worldview—if we’re the ultimate authority and we make the rules, why not decide who lives and who dies? Without an absolute authority (God’s Word), morality is utterly relative and ultimately “everything goes.”

I have heard that it’s fashionable, or at least usual, that when in the first months of pregnancy they do studies to see if the child is healthy or has something, the first offer is: let’s send it away .  .  . I say this with pain .  .  . In the last century the whole world was scandalized about what the Nazis did to purify the race. Today we do the same, but now with white gloves.

It was to these comments that Dawkins was replying in his tweet, which included a link to the Pope’s comments and the text,

And you thought Francis was “the good Pope”?

Abortion to avoid birth defects is not about eugenics. It’s about the avoidance of individual human suffering.

Yet that’s exactly what the murder of the disabled unborn is—eugenics (meaning “well-born” or good in birth)! It’s removing those who do not match an arbitrary definition of “worthy to live.” And it is not about avoiding birth defects, as Dawkins claims. The defects are already there. Abortion simply kills the child who bears those “defects.” No defect has been avoided.

If this is about avoiding human suffering, why not kill anyone who is suffering?

If this is about avoiding human suffering, why not kill anyone who is suffering? Where do you draw the line? If it’s okay to kill a defenseless unborn baby, why not kill a toddler who is suffering? Or a teenager? Or a middle-aged person? Or a senior? Why is it okay to eliminate one class of people, the disabled unborn, but not okay to eliminate someone suffering from MS, arthritis, cancer, diabetes, depression, or some other aliment? Or why not just eliminate people as they get older, since they will likely suffer in their old age, as most people do in one way or another?

Once your ethics are unhitched from God’s Word, anything goes. You have no ultimate authority by which to say any of these things is wrong. But when we start with God’s Word, we can say all of these scenarios are nothing short of murder. A person created in the very image of the Creator God (Genesis 1:27) has been killed.

Our lives have unique value and dignity, not because of our health, level of ability, age, or birth status. Human life is sacred because each human (including every unborn child) is made in God’s image.

You can learn more about eugenics in America’s past and present in this excellent, eye-opening DVD presentation from geneticist Dr. Georgia Purdom, Eugenics, Abortion, and Genetics, available from our online store.

I discussed this item on Answers News today with regular cohost Dr. Georgia Purdom and guest AiG staff writer Avery Foley. Answers News is our twice-weekly news program filmed live before a studio audience here at the Creation Museum and broadcast on my Facebook page and the Answers in Genesis Facebook page. We also discussed the following fascinating topics: