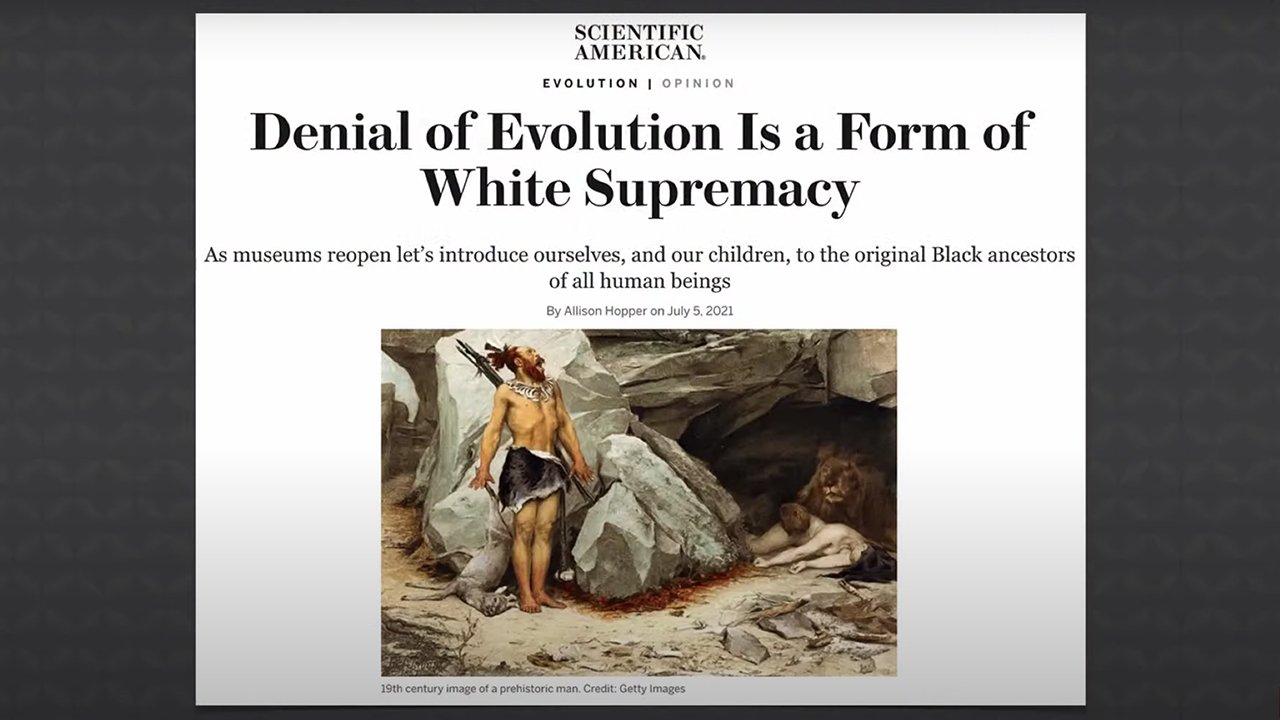 Scientific American is supposedly a scientific publication. Well, as such, they should be ashamed of themselves for allowing a badly researched opinion piece to be printed recently. In an article titled “Denial of Evolution Is a Form of White Supremacy,” filmmaker Allison Hopper, a believer in the evolutionary “out-of-Africa” model, opines about how the supposed dark-skinned ancestors we evolved from are so often left out in museums and in books. In the process, she smears biblical creationists by claiming we believe and teach something we certainly do not!

The author writes what can hardly be described as anything other than garbage designed to create hate against light-skinned Christians:

At the heart of white evangelical creationism is the mythology of an unbroken white lineage that stretches back to a light-skinned Adam and Eve. In literal interpretations of the Christian Bible, white skin was created in God's image. Dark skin has a different, more problematic origin. As the biblical story goes, the curse or mark of Cain for killing his brother was a darkening of his descendants' skin. Historically, many congregations in the U.S. pointed to this story of Cain as evidence that Black skin was created as a punishment.

Now Answers in Genesis is the leading creationist organization in the world with several PhD scientists on its full-time staff. I defy Hopper or Scientific American to find anything remotely resembling the nonsense claimed in her article (especially the bizarre charge that at the “heart of white evangelical creationism is the mythology of an unbroken white lineage that stretches back to a light-skinned Adam and Eve”) on our websites, in our books, or in our presentations. Why? Because that’s not what we believe because that’s not what the Bible teaches. She claims her view is a “literal interpretation” of the text and that’s how the “biblical story goes,” but she never quotes from the Bible (or any creationist or anyone but her own imagination!). But here’s what the Bible says, for example, regarding the mark of Cain:

Cain said to the Lord, “My punishment is greater than I can bear. Behold, you have driven me today away from the ground, and from your face I shall be hidden. I shall be a fugitive and a wanderer on the earth, and whoever finds me will kill me.” Then the Lord said to him, “Not so! If anyone kills Cain, vengeance shall be taken on him sevenfold.” And the Lord put a mark on Cain, lest any who found him should attack him. Then Cain went away from the presence of the Lord and settled in the land of Nod, east of Eden. (Genesis 4:13–16, emphasis added)

Genesis says absolutely nothing about what the mark of Cain was—just that God put a mark on him. Now, the Mormons taught erroneous things about Cain and so-called skin color, but not the Bible or evangelical Christians or creationists.

Answers in Genesis is well known for teaching there are no "white" or "black" people, as all are shades of brown due to the main skin pigment melanin. We’ve always taught that Adam and Eve—Cain’s parents—were most likely middle brown, created with maximum genetic diversity to produce all the various skin shades we have today. We’ve always taught, as the Bible does (Acts 17:26), that there’s only one biological race of humans (and this has been confirmed by the Human Genome Project in 2000), that we are all sinners, and that all need the free gift of salvation in Jesus Christ. That teaching is freely available in multiple places on our website, as well as in books, presentations, and with exhibits at our attractions.

This section from the article that I quoted above contains numerous strawman fallacies that seem to be a deliberate attempt to totally misrepresent Christians and foster hate against them regarding the "race" issue—actually, it appears the whole error-filled item is a hit piece against Christians! To claim, as that piece does, that rejecting evolution is a "form of white supremacy" is a disgustingly evil charge and untrue, as anyone who has actually read any of our materials would be aware.

Of course, it is possible that the author knows that creationists like us at AiG do not believe this nonsense she has written, but she is deliberately trying to associate us with it to denigrate evangelical Christians.

This item was discussed yesterday on Answers News with cohosts Dr. Georgia Purdom, Avery Foley, and Dr. Gabriela Haynes. Answers News is our twice-weekly news program filmed here at the Creation Museum and broadcast on my Facebook page and the Answers in Genesis Facebook page. We also covered the following topics: