If you don’t already love snakes, watch out. Spend a few minutes with Rick Teepen, and you’ll be smitten. His life-long fascination with snakes is contagious. Nearly every Saturday he and his collection of exotic pets can be found at the Creation Museum near Cincinnati, Ohio. Understandably, his Snakes Alive! workshop is always enthusiastically attended.

Participants get to see, up close and personal, God’s design in an unexpected place—the oft-disdained serpent.

Snakes, like the rest of His creation, must survive the constant perils of a fallen world. So God has provided them with extra help. Rick notes, for instance, their beautiful patterns protect them from the prying eyes of hawks, roadrunners, mongooses, and the like. 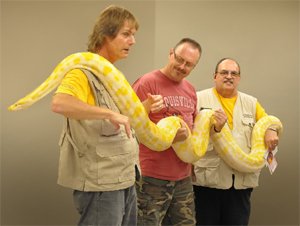 Consider the Pueblan milk snake. The skin on this harmless serpent mimics the deadly coral snake to scare away predators. A catchy rhyme helps guests remember the difference, “Red on yellow, you’re a dead fellow. Red on black, friend of Jack.” (By the way, he does not bring a coral snake!)

Rick also shows off his albino Honduran milk snake to illustrate the bad effects of mutations. His snake, Dreamsicle, would never survive in the wild, where its bright colors would attract predators.

When Rick displays a small box of sand, he then pulls out a Kenyan sand boa and makes a big point: we find God’s hand everywhere. God gave animals genetic information that has allowed them to adapt to changing conditions since the Fall.

The arrangement of the scales on the sand boa’s belly and its narrow head aid its movement through sandy soil. Its mouth is ideally placed to burrow without swallowing sand, while an enlarged scale on its nose (the rostrum) protects its face as it travels. When an insect or rodent walks over its hiding place, the boa can estimate whether it is the right size for a meal, just from the weight pressing down on it.

After presenting other reptiles, including a baby alligator and bearded dragon, Rick closes with a big finale—literally—a 14-foot, 100-pound albino Burmese python. Families can hold the snake while others take pictures. By the end of the workshop, everyone is smitten with these amazing examples of God’s handiwork.

Next Article BioLogos—Obscuring the Truth