God is miraculously softening some of the world’s hardest soil through His servant Sergei Golovin. Nineteen years ago Golovin founded the Christian Center for Science and Apologetics to sow the gospel in former Soviet-bloc countries, using creation materials. Although translating books, videos, and radio shows is an important aspect of the Center’s work, Sergei sees the greatest effects through seminars he offers in Ukraine, Russia, and Uzbekistan.

One seminar, “Science and Religion,” is aimed directly at public school teachers. While Golovin and those working with him are limited in what they can say, they can legally answer any question put to them. Several provoking questions at the end of a recent teachers’ seminar at Novograd-Volynsky, for example, allowed Golovin to share the Bible directly in this atheistic, post-communist public school system.

The teachers were engaged during the presentation, and they eagerly accepted the follow-up literature. Golovin was allowed to donate a copy of all the ministry’s books and videos to the city’s department of education library. 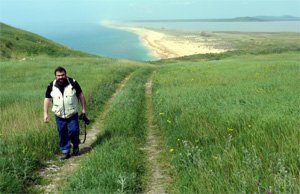 Sergei Golovin, a Ukrainian geophysicist, sows the seed of the gospel in the former Soviet republics through creation literature and seminars. www.scienceandapologetics.org/engln.html

The school’s supervisor was so impressed that he arranged a meeting with the city’s mayor, who encouraged Golovin to supply the city hall library with a copy of all his materials. Since the mayor is respected in the town—uncommon in a typically corrupt society—his endorsement reassured parents that they could trust the materials. Never before has Golovin been able to approach and influence political powers in that way.

With all the work being done to spread the Word, what is the biggest challenge Golovin sees? Complacency in regions where life is easier for church members.

Merely informing people of the truth is not enough. If the seed of the gospel is to grow, it must fall on well-prepared soil, where the truth of Genesis—including Adam’s Fall and our need for the Savior—is fully understood.

Previous Article Canadian Creation Ministry Next Article What Is the Gospel?