Global investor, philanthropist, and founder of the Templeton Prize dies at 95

Sir John Templeton, global investor and renowned philanthropist, died of pneumonia at Doctors Hospital in the Bahamas yesterday. He was 95. 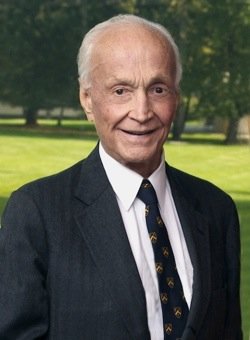 What is the best way to live? How large is God? How are finite beings related to the infinite? What was God's purpose in creating the universe? How can we be helpful? These ageless questions can inspire people today just as they have inspired people throughout the ages, linking the human soul to philosophy and to the love of wisdom.

Sir John Templeton, global investor and renowned philanthropist, died of pneumonia at Doctors Hospital in the Bahamas yesterday. He was 95.

The American-born Templeton, who spent most of his life as a naturalized British citizen living in the Bahamas, rose to fame in the mid-twentieth century financial world. Templeton pioneered global mutual fund investment strategies and was called by Money magazine (January 1999) “arguably the greatest global stock picker of the century.”

Templeton apparently recognized the ultimate transience of wealth, however; during the second half of his life, the lifelong Presbyterian devoted his fortune to philanthropic efforts through the John Templeton Foundation. The Foundation’s mission is to “serve as a philanthropic catalyst for discovery in areas engaging life’s biggest questions. These questions range from explorations into the laws of nature and the universe to questions on the nature of love, gratitude, forgiveness, and creativity.” Templeton was particularly supportive of work answering what he considered life’s “big questions”—in the fields of science, religion, and human purpose.1

But a telling glimpse into Templeton’s spirituality can be found in this excerpt from his Templeton Foundation biography:

Although he was a Presbyterian elder active in his denomination and served on the board of the American Bible Society, Templeton espoused what he called a “humble approach” to theology. Declaring that relatively little is known about God through scripture and present-day theology, he once predicted that “scientific revelations may be a gold mine for revitalizing religion in the 21st century.”

Templeton also founded the Templeton Prize, the world’s largest annual award given to an individual, to “recognize exemplary achievement in work related to life's spiritual dimension.” The Templeton Foundation boasts that the prize’s panel of judges has included representatives of all of the world’s major religions over the years, as has the list of winners. Sadly, Answers in Genesis has often been compelled to point out times when the award has gone to staunch evolutionists and even agnostics. While Templeton’s goal was to ask questions, our goal at Answers in Genesis is to show that there are real answers—spiritual and otherwise—to be found when we start from Scripture.

Despite our differences, the Answers in Genesis family extends its most heartfelt condolences to the Templeton family on the passing of Sir John.