The Katrina Emergency Tax Relief Act of 2005 (KETRA) is a new law that allows for special tax treatment to encourage charitable giving.

Cash donations to a qualifying [501(c)(3)] nonprofit organization between August 28 and December 31 of this year are 100% deductible against 2005 income. Except for certain corporate gifts, donations do not have to relate to hurricane relief. The provision also extends to corporations, partnerships, limited liability companies and S corporations, and covers cash donations from either taxable income or retirement plans.

Q: So does this mean any cash gift to Answers in Genesis is 100% tax deductible?

The new legislation removes the 50% limitation on charitable giving and allows a taxpayer who itemizes his/her deductions to take 100% of the total charitable cash contributions donated between the dates above as a charitable tax deduction up to 100% of adjusted gross income.

Here’s an example of how that works:

A: Yes! If your partnership, limited liability company or S corporation donates to a charitable organization, such as Answers in Genesis, during the qualifying time period, the gift is considered to be from the individual, hence the above applies.

Q: If I donated to several organizations, including Answers in Genesis, do they all apply?

Q: If I donate food, clothing, or other non-cash items, such as stock or real estate, do I also qualify for the waiver?

A: No, unfortunately, this window of opportunity to deduct up to 100% of 2005 income applies primarily to cash gifts. Perishable and durable items such as food and clothing, and non-cash financial assets such as real estate and stock are excluded. The one exception is gifts of inventory, which are deductible at basis plus 50% of the profit in the donated items.

Q: Can I withdraw from my retirement savings to participate in this program?

A: Yes! The special provision for 100% deduction this year for cash gifts provides an opportunity for tax free current gifts from individual retirement accounts, Keogh plans, 403b plans, 401(k) plans, and other qualified retirement or deferred contribution plans. Donors who are 59 and ½ can withdraw cash from their qualified retirement plans and get a 100% offsetting charitable contribution deduction for a cash gift to Answers in Genesis. It is possible for a donor to make a tax free cash withdrawal from his or her qualified plan and transfer the cash to Answers in Genesis.

Caution: Donors should consult their tax advisors on the overall tax effect of a withdrawal from their qualified plan or any other strategy that increases their adjusted gross income. It is possible to reduce the value of other itemized deductions.

AiG donors provided the funding for almost 4,000 backpacks. The following card was inserted into each backpack, with the message of the gospel, including the reason we see death and suffering in the world, on the back. Pastor Barnett said the outreach by AiG and its generous supporters “gave the gospel credibility with a lot of folks.” 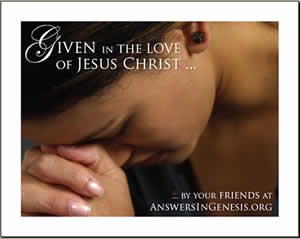 AiG is not a tax-advisory organization, and strongly encourages you to consult your tax advisor or accountant for further details. We remind you that careful planning is essential to any tax-adjustment program. For more detailed information, see the RIA Special Study (PDF) concerning KETRA.

Q: What did AiG do to help victims of Hurricane Katrina?

A: This story illustrates how AiG has helped the victims of Hurricane Katrina, not only physically, but spiritually.

A. There are several ways you can give!