Recently Annie Wichman received the Girl Scout Gold Award—the highest honor that a Girl Scout can achieve, similar to the Boy Scouts’ Eagle Scout rank. Her project, which took three years to complete, required more than the usual “vision,” “passion,” and “community impact” of a Gold Award. It required courage. 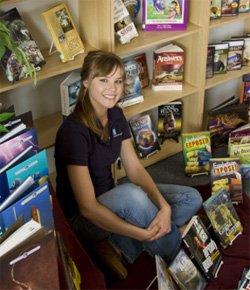 Annie Wichman won the Girl Scout Gold Award for this display, which she constructed for the church library at Calvary Community Church in Williams Bay, Wisconsin.

For her project, titled “Alternative Universe,” she decided to build a library of apologetics materials on the subject of creation. Her objective was to enlighten Christians and non-Christians about the Bible’s account of the history of the universe, and to equip Christians to defend their faith.

The resources are a permanent addition to her church library. Annie continues to add DVDs, books, and other resources, even though her project is officially over. For example, the display now includes a model of the Ark, along with various posters to catch the visitor’s eye.

Annie emphasizes creation in other areas of her Christian service, too. She participated in a VBS program that focused on creation, teaching children in grades 1–6. As a result of her efforts, an adult creation class was also held and well-attended by church members and individuals from the community. Her example is a challenge to others—of all ages—to step forward and do something to spread the truth of God’s creation.