Something to roar about

(NOTE: This is an adaptation of a news release that was sent to the national media across America on Monday.)

Less than two months after opening its doors to the public, the Creation Museum hosted its 100,000th guest this past weekend—a milestone not expected for months to come and a sign, museum officials say, of the continuing popularity of the critically acclaimed high-tech facility. 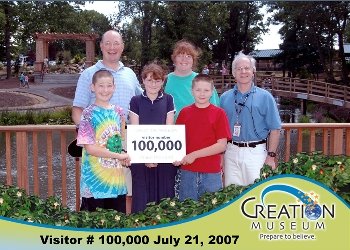 Kevin and Debbie Farner—with children Samantha, Kevin Jr., and Quinn—were the 100,000th museum visitors last Saturday. They are standing outside the museum entrance and in front of a nature trail with museum operations director, Ted Laughlin (far right).

The huge crowds and the need to adequately accommodate them have prompted the museum’s parent organization, Answers in Genesis, to seek permission to expand the parking lot by 600 spaces.

The museum and planetarium are located in northern Kentucky, just west of the Cincinnati Airport. The museum presents a walk through history according to the Bible, from creation to the last book of the Bible, Revelation. Along the way, it uses animatronic dinosaurs (and real dinosaur bones and eggs, plus large models) as a main teaching tool, and to present the gospel message.

“We are delighted the Creation Museum has generated such interest, but I'm not surprised,” said Tom Caradonio, president and chief executive officer of the Northern Kentucky Convention and Visitors Bureau. “Many religious-meeting partners told us early on they were interested in taking groups there.”

A family near Buffalo, N.Y., passed the 100,000 guest threshold. Kevin Farner, along with his wife Debbie and three children, drove eight hours to reach the museum. They first learned of the ministry after hearing AiG President Ken Ham speak at a home-school conference in Syracuse, New York, a few years ago.

Because of the on-going growth and the need to handle visitor and staff parking (e.g., Saturdays have been witnessing crowds of about 3,500 in recent weeks), the museum has petitioned Boone County, Kentucky, commissioners to add an additional 600 spots to its already burgeoning parking lot. A hearing on the request is set for next month.