Terrorizing of the soul and mind at the Creation Museum?

As AiG’s new Creation Museum continues to appear in newspapers and magazines, some of the most interesting feedback can be seen in letters to the editor and guest columns.

As AiG’s new Creation Museum continues to appear in newspapers and magazines around the world, some of the most interesting feedback appearing in print about this “walk through biblical history” center can be seen in letters to the editor and guest columns. They often come from evolutionists who are concerned about the museum’s high-profile challenge to evolutionary dogma. Over the months, several letters and columns have appeared in our “hometown” newspapers in Northern Kentucky/Cincinnati. (The museum is only an 18-minute drive from downtown Cincinnati.)

One writer who sends letters about her opposition to the museum to various newspapers in the region made a few bizarre comments which found their way into the July 4 edition of the alternative (i.e., left-leaning) weekly newspaper in Cincinnati called CityBeat. As an example, she referred to the museum’s opening to a form of terrorism, as she wrote to piggyback off the newspaper’s previous cover story about the museum and its front-page-blaring headline: “Ignorance is a form of terrorism” (pictured below). Here is the first half of her unusual letter. 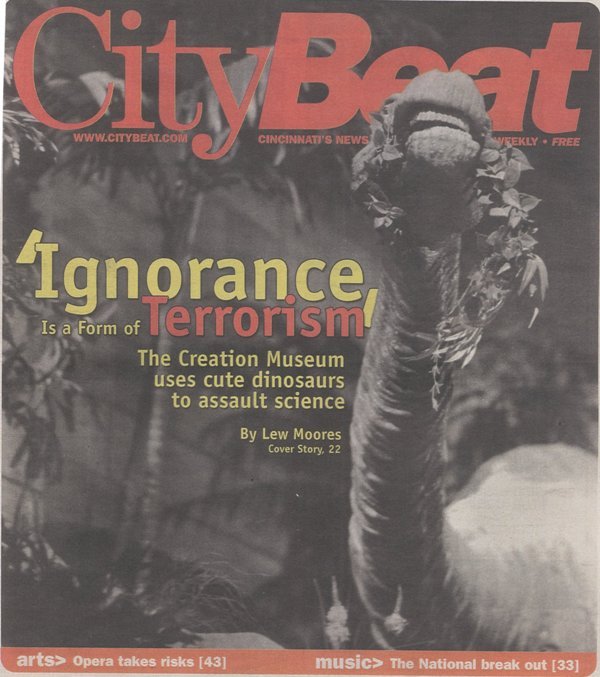 The response generated by CityBeat’s placing the quote “Ignorance Is a Form of Terrorism” on the cover of the issue about the opening of the Creation Museum sent me to the dictionary. Being damned for not completely swallowing whole a complicated story that has no factual basis (Genesis story in The Bible) would seem like a “tyranny” over the mind, for starters.

My trusty old Random House Unabridged Dictionary defines “terror” as “intense, sharp, overmastering fear” and “terrorism” as “the use of terrorizing methods to produce a state of fear and submission.” Unfortunately, due to our present world situation, the word “terrorism” now engenders a picture of suicide bombers and other outrageous means to zap lives in huge numbers.

This terrorism is totally based on fear for one’s physical safety. But in the broader sense, engendering fear for a soul’s well-being is also terrorism and unfortunately the principle stock-in-trade for too many houses of worship.

What surprises me is that none of your readers [in the “Letters” section of “CityBeat,” June 20] have entertained the notion that juvenile attendees might not one day grow up and sue the museum or those who took them there for deception, messing with their minds and interfering with their education. I know that I would want to. ...
—A. B., Sharonville (Cincinnati), Ohio (emphasis added)

This writer, by the way, is not the only person who has mentioned such a frivolous lawsuit in relation to the Creation Museum. Dr. Lawrence Krauss, in a guest column in the Cincinnati Enquirer (Dr. Krauss, however, lives near Cleveland), opined that “parents should be ready to bring lawsuits for any school system that uses public funds to bring students to this museum of misinformation.”1

The seriousness of this threat is not trivial, however. Dr. Krauss has been the most visible recent spokesperson against the museum (on behalf of a group called “The Committee to Defend the Constitution,” or DefCon), and has appeared on national news programs to speak against AiG and the museum.

As we have written before on this website, Dr. Krauss’s representation of DefCon begs the question: how is a private museum, totally funded by AiG supporters (without receiving a penny of government monies) somehow a danger to constitutional liberties? Furthermore, there is no compulsion to come here. In addition, because AiG is not advocating that creationists go to the courts or legislatures to mandate that creation or intelligent design be taught in public schools, we are scratching our heads as to why DefCon is so concerned about the museum as it relates to constitutional issues.

The opening of the Creation Museum and the flak it continues to receive are a sign of the times as America’s “culture war” between secularists and Bible-believing Christians heats up. With such lawsuit hysteria regarding a private museum, we do fear for the liberties of Christians everywhere when they try to promote their worldview through other channels.

The growing anti-Christian sentiment in America is being reflected not just with the threat of frivolous lawsuits from evolutionists, but in an increasing number of books and articles (e.g., the text American Fascists by Chris Hedges). Many secularists are attempting to make the case that Christians (the so-called “religious right”) are poised to take over the country “fascist-style” at the next national crisis. In their panic, they lash out at a Bible-proclaiming museum.

Ironically, we are discovering that in this land of liberty, it is the secular humanists—often heard to proclaim toleration—who can be the least tolerant of people when something challenges their worldview.

Their aggressive tactics, threats of lawsuits, and increasingly intensive efforts to teach evolution more dogmatically in public schools, however, should not panic Christians. Instead, such disturbing trends should motivate believers to become more active in presenting an alternative worldview (biblical Christianity) that is now largely censored from the public arena.

[Editor’s note: Be sure to read the tremendous support that the Creation Museum has received from scientists and teachers around the world.]