Ken Ham and the Creation Museum on Nightline

ABC-TV’s Nightline will include Ken Ham and the Creation Museum to discuss the new movie Creation that releases Friday in the U.S.

We had reported earlier on this website that a film crew for the ABC television news program Nightline was here at the Creation Museum to get our reaction to the new film Creation. The movie, opening in U.S. theaters on Friday, is really about evolution and not the book of Genesis, as it’s a drama on the life of Charles Darwin.

The Nightline segment, which will briefly show excerpts of an interview with AiG President Ken Ham as well as scenes of the Creation Museum, will air Friday evening (January 22) on U.S. television: 11:35 p.m. Eastern and Pacific times and 10:35 p.m. Central time. It may also be broadcast in the UK on a similar TV news program. Creation was shown in UK theaters last year during what was commonly called “The Year of Darwin” (2009 was the 200th anniversary of Darwin’s birth).

In light of the new Creation film, ABC-TV wanted to get AiG’s perspective on Darwin’s life and how controversial he was. The interview with Ken lasted 25 minutes, though just a few snippets will likely end up on Friday’s program. The TV crew also filmed Ken in different parts of the museum. 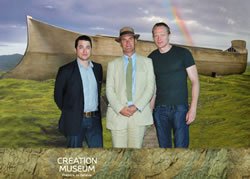 The star of Creation is the actor Paul Bettany, seen in The Da Vinci Code, Master and Commander, and a second film of his to be also released this Friday: Legion. Mr. Bettany and two colleagues (one of them the well-known British writer A.A. Gill) toured the Creation Museum in June—see the photo, where Bettany is at the right, and Gill in the middle.

Gill, an atheist, is the author of a not-very-flattering article about the Creation Museum that is found in February’s issue of Vanity Fair magazine. Bettany came to the museum with Gill and toted an expensive camera, and Bettany supplied the photos for the Gill/Vanity Fair piece. (By the way, the name Vanity Fair comes from a fictitious place mentioned in the Christian classic The Pilgrim’s Progress—how ironic; and how ironic, too, that the avowed atheist Bettany is playing an angel—the Archangel Michael—in Legion.)

On Friday, we will post a movie review of Creation.

Here is a photo of the Nightline crew inside the museum’s main hall, interviewing a guest from Canada regarding his thoughts about Darwin. 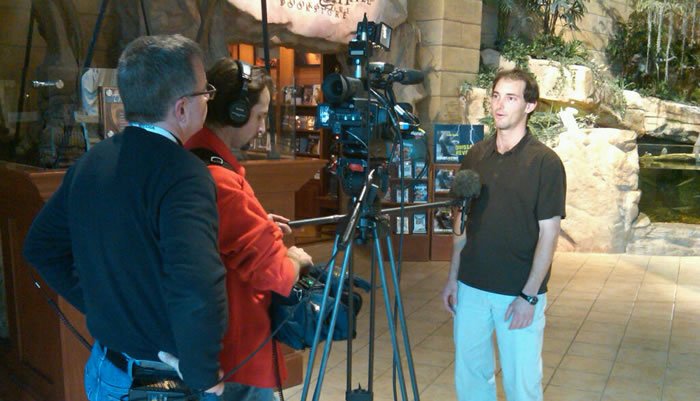