Greeted by a Mastodon

An enormous mastodon skeleton greets attendees at the Southern Baptist Convention before taking up residence in the Creation Museum. 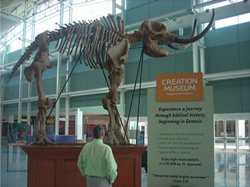 A 12-foot mastodon skeleton welcomes attendees to the Southern Baptist Convention annual meeting in Louisville this week, courtesy of Answers in Genesis’s Creation Museum. The skeleton casting is one of four that were made of this giant relic, the largest relatively complete mastodon ever discovered. The original was found in nearby Heath, Ohio, in 1989, during excavation of a golf course, and was sold to Kanagawa Prefectural Museum in Yokohama, Japan, in 1993.

Part of a future exhibit at the Creation Museum makes its debut at the Southern Baptist Convention annual meeting being held in Louisville this week, a 12-foot tall casting of a mastodon skeleton discovered in nearby Ohio 20 years ago. Following its duties drawing attention to the Creation Museum table at the convention, it will make the 90-mile trek across the state to reside permanently at the museum.

“We are excited to be there at the Southern Baptist Convention in Louisville this week, and we hope that the mastodon will help those attending the meeting understand that science and the study of the history of our planet fit right in with the theological and spiritual disciplines of the Christian faith,” said Creation Museum founder Ken Ham. “A study we commissioned recently has shown that this disconnect is one of the primary factors in young adults leaving the church.”

This topic will be addressed by Ham at the upcoming live video webcast, “The State of the Nation,” broadcast from the Creation Museum on Thursday, June 25, at 8:00 p.m. eastern. The results of the study were published recently in Ham’s new co-authored book, Already Gone: Why Your Kids Will Quit Church and What You Can Do to Stop It, from Master Books.