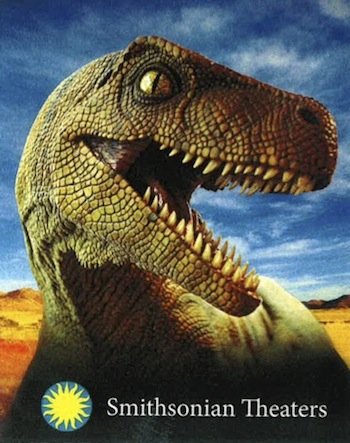 Image from the front of a Smithsonian IMAX theater flyer features dinosaur from the Creation Museum. 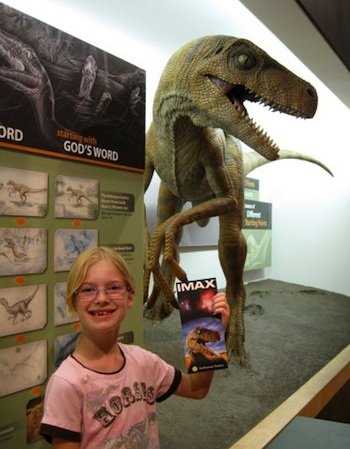 Answers in Genesis staff member’s eight-year-old daughter, who recognized the Creation Museum’s dinosaur on the Smithsonian flyer. (Image provided by her parents and used with their permission.)

Have you ever seen the eye-catching, scientifically accurate dinosaur sculpture below? Well if you haven’t, you’ll have to come to the Creation Museum near Cincinnati to see it, not the Smithsonian Museum as you might have thought from seeing Smithsonian IMAX Theater advertisements.

The daughter of an Answers in Genesis staff member recently noticed flyers in her family’s hotel that prominently featured a familiar dinosaur: the very one found in the Creation Museum’s “Starting Points” room.

In the “Starting Points” room, Creation Museum guests learn that a person’s “starting point”—God’s Word or man’s fallible opinions—guide his interpretation of scientific information relevant to our origins. Historical science represents an attempt to draw conclusions about the untestable past, such as biological origins. Both creation scientists and evolutionary scientists examine the same data—such as dinosaur fossils—but draw different conclusions—such as how old the fossils are and whether their spot in the geologic column represents their evolutionary appearance or their sudden burial due to the global Flood.

The Smithsonian had apparently chosen the photo from a stock photo source to draw potential visitors’ attention to its flyers.

The Smithsonian had apparently chosen the photo from a stock photo source to draw potential visitors’ attention to its flyers. We are confident that the Smithsonian was unaware the Creation Museum and Answers in Genesis owned the rights to this image. The Creation Museum notified the Smithsonian’s representative, saying, “We believe that the image was taken by someone visiting our museum and then sold on a photo stock website without permission. We understand that the Smithsonian was most likely unaware of the unauthorized use of the image.” The Smithsonian’s representative has responded: “We were unaware of the rights issues surrounding the image and are now working to remove it from our IMAX theater promotions. Thank you for bringing our attention to this matter.”

Of course, as Ken Ham wrote in his blog, the Creation Museum would have been willing to allow use of this image provided due credit to its source was given—but then that would have been quite an admission on the part of the Smithsonian!