In ten years, AiG–U.S. has conducted several hundred teaching meetings around North America, and has reached probably over 750,000 people. 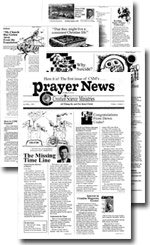 In many ways, Answers in Genesis–U.S. views March as its unofficial “birthday.”1 For example, not only was our first newsletter (right) coming off the presses in March 1994, but AiG–U.S. also held its first major conference.

In ten years, AiG-U.S. has conducted several hundred teaching meetings around North America, and has reached probably over 750,000 people. Hundreds of life-changing testimonies have poured into the AiG offices, including many salvation ones. Here is a recent testimony from Gilbert, Arizona, in which a pastor shared with us the following report after Ken Ham, AiG-U.S. president, spoke at his church:

I just counseled four teens who prayed to receive Christ. AiG’s talk answered many questions for them.

They were invited to come by some of the young people in the church who told them: “come and hear a guy who does comedy!!!!” The pastor said he was glad they came, but told the young people they shouldn’t have misrepresented the meeting like that [Editor’s note: In partial defense of the teens, Ken Ham’s talks do contain humor]. Nonetheless, everyone was thrilled that the four prayed to receive Christ.

Interestingly, as we celebrate how God has blessed AiG since 1994, it just so happens that our next major U.S. conference will be held in Denver (Wheat Ridge), Colorado on April 2–4.