From the beginning of our speaking ministry, I began to see a pattern. Wherever I spoke, regardless of the country, people were asking the same basic questions. 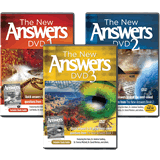 For those interested in learning some quick answers to tough questions, the New Answers DVD 1 and 2 feature 48 minutes each of engaging interviews, tackling the tough inquiries that Christians face.

I had just given a presentation on the campus of Cardiff University in the country of Wales. I’ll never forget it. A young man who had been in the audience came down to the front to speak to me. He leaned forward on the high bench at the front of the auditorium, looked at me, and exclaimed: “Man . . . that was radical!”

I asked, “What was so radical?”

He replied, “Christians having answers!”

Looking back over 30 years of speaking on creation vs. evolution, I have noticed that after most talks, a long line forms with people wanting to ask questions. From the beginning of our speaking ministry, I began to see a pattern. Wherever I spoke, regardless of the country, people were asking the same basic questions:

And there were many more!

Back in the ’80s, I thought it would be a good idea to compile the most-asked questions (and their answers) and publish them in a booklet. The first Answers Book was born. It quickly became extremely popular.

We then expanded the answers and turned this publication into an actual book. Well, this book proved to be so popular, we expanded it even more—and a few editions later, it is now known as The New Answers Book.

Over time, we continued to compile the questions people were often asking about the book of Genesis. With ongoing creationist research to bolster our case, The Answers Book itself was expanded—and we published what we today call The Answers Book 1, answering over 25 tough questions. God has blessed it to become the biggest-selling creation apologetics book in the world since it was released two years ago.

But we didn’t stop there! Because even more questions were being thrown at us by the media, skeptics, and searching Christians, we felt the need to publish a follow up. The Answers Book 2 was published, with 31 additional questions not covered in book one.

And then, after we did some serious research into why so many young people are leaving the church when they become adults (this is reported in our new book Already Gone), we created a four-part series of children’s books to give kids (and parents) answers for their faith: The Answers Book for Kids.

Evolving from Print to Video

Now, how could this Answers series possibly “evolve” further? This month, Answers in Genesis has taken the Answers Books concept to a whole new level: we’ve just produced a set of DVDs featuring various AiG speakers and researchers. It’s a video version of the Answers Books!

But in your hearts set apart Christ as Lord. Always be prepared to give an answer to everyone who asks you to give the reason for the hope that you have. But do this with gentleness and respect . . . .

The word answer comes from the Greek word apologia. It can mean:

We live, of course, in a very skeptical age. Many accusations are leveled by non-Christians against the Bible—its authenticity and authority. But AiG is at the forefront of equipping believers with answers so that they will be more effective as they share the gospel of Jesus Christ.

Christians who are able to give answers shouldn’t be seen as “radical”—actually, they should be the norm. I urge you to become equipped with the latest answers in order to be more effective in being a witness for the Christian gospel.