This month, we are publicly launching a very special, much-needed, and powerful project for an end-of-year challenge. I believe you’ll truly be excited by what we’ve planned—I’m certainly excited! I can’t wait!

Let me give you some background.

Increasingly, we live in a culture that loves death! Now, I don’t mean that people are doing it formally and intentionally—of course, most would not see death as desirable. Rather, this love of death is the result of that which people love and brings much death to the culture—and ultimately the second death (eternal separation from God) for them.

As I was thinking about this observation, I was reminded of Proverbs 8:36: “For whoever finds me finds life and obtains favor from the LORD, but he who fails to find me injures himself; all who hate me love death.”

In the USA, 2020 is a major presidential election year. And there’s no doubt one of the main topics that will be featured in the promises made by those running for the presidency and other elected positions will be where they stand on abortion.

Most candidates, sadly, will gleefully shout their “love of death.” How? By promising to bring death to mothers’ wombs! It’s a shocking state of affairs—downright evil! I believe abortion is the greatest holocaust ever! In our modern era, at least 1 billion children have been slaughtered by abortion worldwide, and about 60 million of those murders have occurred in the USA since the sacrifice of children to the “god of self” was legalized in 1973.

In fact, I call abortion “child sacrifice”—because that’s what it really is! To me, there’s no such thing as a so-called “pro-choice movement”—it is a pro-murder movement.

And consider just a couple of the many passages where God addressed child sacrifice in his dealings with the Israelites, such as:

“When you present your gifts and offer up your children in fire, you defile yourselves” (Ezekiel 20:31).

“Declare to them their abominations . . . blood is on their hands. With their idols they have committed adultery, and they have even offered up to them for food the children whom they had borne to me. . . . For when they had slaughtered their children in sacrifice to their idols” (Ezekiel 23:36–39).

Really, what the Israelites did in sacrificing their children to idols is no different from what’s happening with abortion today—only it’s called “health care” or some other name to try to hide the fact that it’s actually the ruthless killing of human beings made in the image of God in their mother’s wombs.

We at Answers in Genesis stand against the abortion holocaust. We’ve produced various DVDs, books, and articles dealing with this tragedy. This month, I wanted to let you know that we’re launching a special Creation Museum project to build a powerful “Fearfully and Wonderfully Made” exhibit. And here’s what’s also exciting: we’re designing the first phase of the exhibit to be replicated as a mobile exhibit that groups of Christians or churches can obtain and display in their local communities.

This large new exhibit will be designed and constructed by AiG’s talented designers, artists, sculptors, and fabricators (with the assistance of our PhD scientists)—the same team that produced the great exhibits at the Ark Encounter and Creation Museum. So you know this exhibit will be of spectacular quality!

Let me walk you through an outline of what phase one will entail. Through the use of 3D models, signage, videos, and other creative and innovative displays, the following eye-opening content will be covered:

This section will start with The Wonder of Life. Here, the powerful words of the Psalmist will be brought to life.

“For you formed my inward parts; you knitted me together in my mother’s womb. I praise you, for I am fearfully and wonderfully made. Wonderful are your works; my soul knows it very well” (Psalm 139:13–14). 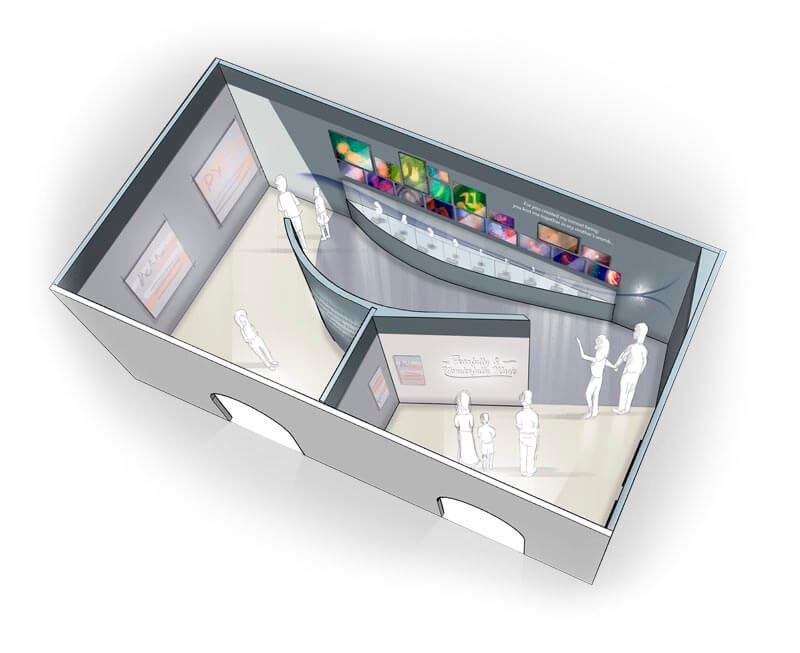 Once this Scriptural foundation is established, our guests will then learn what it means that every person is created in the image of God. It’s what makes us distinct from animals. In fact, we are created to rule over them (and to live forever):

“Then God said, ‘Let us make man in our image, after our likeness. And let them have dominion over the fish of the sea and over the birds of the heavens and over the livestock and over all the earth and over every creeping thing that creeps on the earth.’ So God created man in his own image, in the image of God he created him; male and female he created them” (Genesis 1:26-27).

Because all people are made in the image of God, everyone is inherently valuable. And the unborn child is just as valuable as anyone else (Exodus 21:22). As a child in the womb, John the Baptist leaped in the presence of the unborn Jesus (Luke 1:41). Also, God has made each person unique! From the moment of fertilization, every person has a one-of-a-kind combination of DNA, half of which comes from the mom and the other half from the dad.

Section B: Life in the Womb

This superb section of the exhibit will feature medical and scientific information about the sanctity of life. 3D printed models, vivid images, and informative videos will show the various stages of the baby growing in the womb. Nearby signage will explain certain key points of development, focusing on God’s intricate design. 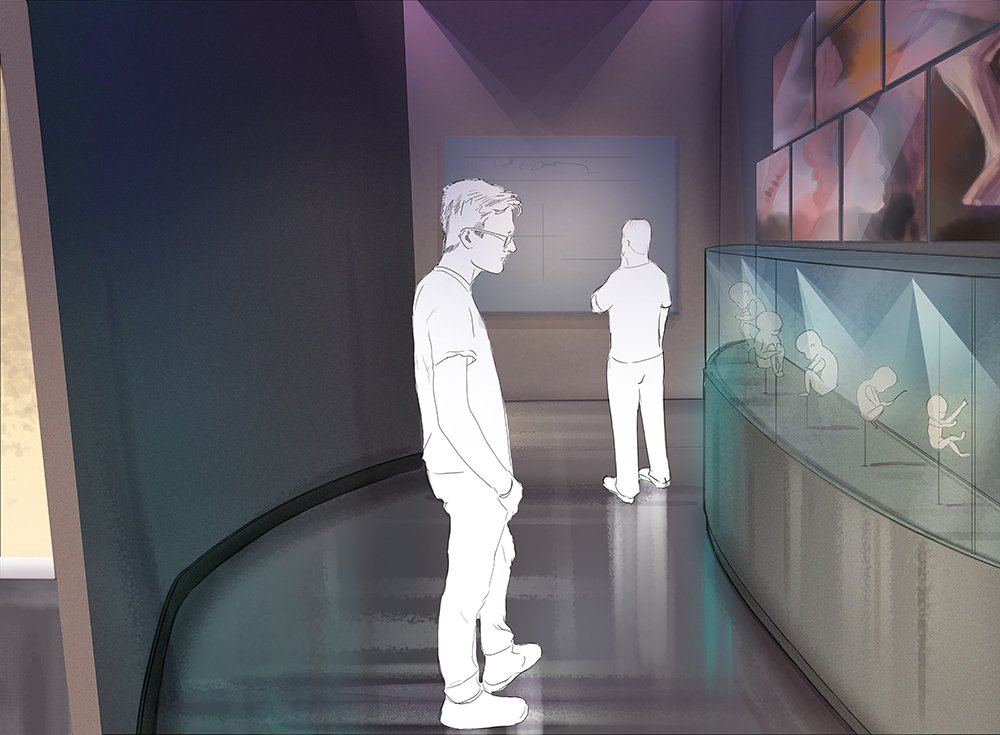 The next stage of this large exhibit will further highlight the sanctity of human life. All human life (regardless of age, ethnicity, physical condition, etc.) is created in the image of God and therefore has inherent value. Thus, we must oppose abortion and euthanasia.

We will address the common objections raised by our culture against those who stand for a biblical pro-life view. Answers will be given to the following questions to help visitors gain the proper perspective and learn how to address these issues when they face them. (As Christians take a stand for the unborn, equipping them is essential.)

The exhibit will conclude with a clear message of God’s forgiveness. The gospel will be clearly shared, with a special section directed toward those who have had an abortion. No doubt there will be people who will walk through this exhibit who need to hear the message of 1 John 1:9: “If we confess our sins he is faithful and just to forgive us our sins and cleanse us from all unrighteousness.”

Now, once this exhibit is completed, there will be a phase two—with even more stunning displays and powerful information. Then a phase three as we redesign the section of the museum where these exhibits will be located.

As I said, I can’t wait! But it takes time, the necessary funds, and supporters like you who have the same bold stand we do at AiG on the infallible, inerrant Word of God. As you know, we don’t lack vision, and thanks to you, we have been able to grow a ministry that is impacting tens of millions of people globally each year as we have opened the world’s two leading Christian themed attractions that impact thousands daily.

All three phases of this pro-life exhibit are estimated to cost $2.2 million, with phase one opening mid-2020. And God has given us a very special blessing as we set our sights on raising this full amount by the end of 2019: a few of our supporters have already provided matching gifts that total $1 million, which means that every gift to support this exhibit by the end of the year will be matched dollar-for-dollar—up to $1 million!

So, we are asking you to prayerfully consider a generous gift so we may take full advantage of this wonderful matching gift challenge. Your gifts and prayers will be a tremendous blessing! Thank you for doing what you can to help us declare this most important pro-life message.

Research indicates around 30% of those who visit the Ark and Creation Museum are non-Christians. This new Fearfully and Wonderfully Made exhibit is going to impact millions of people with the truth and the gospel, and challenge them to be equipped on this vital topic of life in the womb!

Previous Article Is There Hope for This Planet? Next Article Thanking the Faithful Remnant