If the Foundations Be Destroyed

Can present-day social clashes—such as homosexual marriage and religious expression in the public square—be traced back to the foundations of our world in Genesis chapter 1? Ken Ham, the founder of Answers in Genesis, says they certainly can.

Mr. Ham’s contention is that church leaders throughout the centuries have consented to secular notions that counter the biblical account of creation. By doing so, these theologians and clerics have allowed the absolute authority of the Bible to be challenged.

Since the foundations of biblical truth were allowed to be challenged, subsequent generations have continued to venture further and further from the Bible’s dictates, choosing instead to follow social whims and impulses.

It is no wonder then that we find ourselves, as a nation, clashing over social issues that were once non-issues when the Bible was revered as ultimate truth by our churches, our schools and even by our government.

But our nation has turned its collective back on the Word of God.

Pollster George Barna recently found that four-of-every-ten people involved in Christian discipleship programs believe that there is no such thing as absolute truth. And only 44 percent of adults—and only 9 percent of teenagers—said that they are certain of the existence of absolute moral truth. 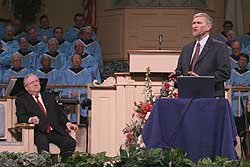 It’s really no wonder that we are losing the battle on homosexual marriage and other critical cultural issues today.

Mr. Ham, speaking at Thomas Road Baptist Church [Lynchburg, Virginia, US] on February 15, said the reason for this is quite simple: we are today missing church leadership that recognizes the Bible as the absolute authority.

I know it’s not a popular notion to believe in Satan—or an ultimate evil, for that matter—but the Apostle Paul warned in II Corinthians 11 that Satan would use the same method that he used with Eve to convince us not to fully believe the word of God.

“He wants us to doubt the authority of the Word that will lead to unbelief,” said Mr. Ham.

He diagramed how bygone theologians began to accept evolutionary thought. Initially, they said they could accept the conclusion that the earth must be millions of years old. They concluded that this was all right—that doesn’t affect the Bible in any way. But they had to subsequently reinterpret the six days of creation. So they placed millions of years or long ages between the days of creation. So the day-age theory came about, and then the gap theory which placed millions of years between the first two verses of Genesis. And then theologians, now on an uncontrollable slippery slope, concluded that Darwinian evolution could be combined with biblical teaching.

“If the foundations be destroyed, what can the righteous do?” (Psalm 11:3)

These church leaders who allowed the notion of evolution to be combined with biblical teachings actually unlocked the door to undermine biblical authority, Mr. Ham said. 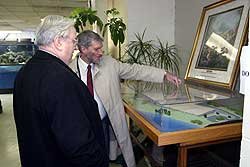 The outcome is that many Americans, believing the Bible’s history to be inaccurate, now disbelieve many other parts of the Bible. If one part of it can be challenged, why should the rest of it be believed?

That’s why it is so important to defend the Bible’s ultimate truth. Mr. Ham said that when increasing numbers of church leaders give up Genesis as the foundation for the Bible’s absolute authority, our basis for right and wrong is challenged. We can no longer effectively teach that marriage is designed by God for one man and one woman.

Ultimately, the compromise of the church has led to the increasing attacks on the authority of the Word of God. Disbelief has swept through the culture of England and we are not far behind.

Mr. Ham said the response of the church cannot be, “Trust in Jesus,” because much of the world does not believe in the ultimate truth of the Bible anymore. Simply saying “trust in Jesus” is preposterous if people have become convinced that the Bible is just another book.

That’s where Answers in Genesis comes in. I believe this organization is developing into one of the most important Christian ministries in the world. They are now building a massive Creation Museum near the Cincinnati International Airport, which will skillfully address the issues of Genesis and further defend the foundations of the Bible.

Answers in Genesis is designed to help the church restore the authority of the Word of God and give the answers to evolutionary thought. Because of this ministry, ministers across the nation can preach the Christian message to a culture that has been taught that the Bible cannot be trusted. The organization is equipping the church with answers so that we can defend the faith and challenge the church concerning compromise.

Please visit their website to learn more about their efforts. Mr. Ham hopes the result of this vital new project is a new reformation.

The time for this ministry is now because our politically correct society is sanctioning whatever social fad comes down the path. If we are to alter the present course of our nation it will be because—and only because—the church daringly declares the foundational truths of God’s Word that is just as pertinent to people today as it was when it was written.