[Editor’s Note: This Q&A has been updated as of February 16, 2012, to reflect the current status of the Ark Encounter project.]

Editor’s Note: The “floodgates” have opened, if you will! To put it mildly, a lot of excitement has been generated by the recent announcement of the construction of a full-size Noah’s Ark and associated themed attractions. Worldwide media and blog coverage has begun—some accurate, and some quite emotional and anti-Christian—so we wanted to share more Ark details with you this month. As our theme for 2011 states, “The Encounter Begins!”

With this issue, we’ll concentrate on introducing you to some of the intriguing people and vision behind the Ark Encounter. The following is adapted from a Q&A session that was conducted with the leaders of the Ark Encounter project and videotaped. 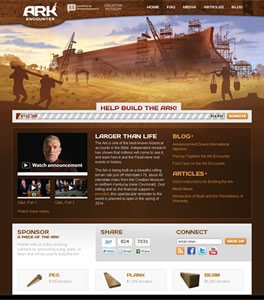 Mark Looy (AiG-CCO): Ken, what was your vision for an Ark?

Ken Ham (president of Answers in Genesis/Creation Museum): Mark, cultures past and present all over the world have accounts of a worldwide Flood. And the poll by CBS’s 60 Minutes and Vanity Fair magazine in 2009 found that 43% of Americans said they would like to find Noah’s Ark. Well, I’m not sure we’ll ever find Noah’s Ark, but imagine building an Ark as a reminder to the world that God’s Word is true.

Q. What helped lead AiG to be involved?

Ken: We decided to conduct our own statistically valid research to see that if we built Noah’s Ark, would people come? So, we hired America’s Research Group to conduct a nationwide poll to find the answer. We found that 63% of the people (that’s about 180 million people) said that they would come if we built the Ark. So, we needed to do this.

Q. Cary Summers, you’ve led the development and operation of more than a dozen very popular family attractions across the United States. What is the Ark Encounter about?

Cary Summers (of the Nehemiah Group; consultant for the Ark Encounter LLC): The Ark Encounter allows the guest to be immersed in both the historical and the biblical time of Noah. It also answers a gigantic question: could Noah have built the Ark?

People will be able to tour it so they can actually see how Noah and the animals lived there.

Q. Tell us something about your unique background?

Cary: Here’s a quick summary of 30 years. I was the CEO of a company called Silver Dollar City [now Herschend Family Entertainment], which operated 14 themed locations in the Midwest and Southeast, including Silver Dollar City in Branson. I was a VP of Bass Pro Shops and created its multi-store expansion strategy, which today operates 55 stores nationwide with sales of nearly $2 billion. When I retired from that, we started the Nehemiah Group, taking on projects around the world [like Nazareth Village in Israel].

Q. Mike Zovath, give us some insight as to how the Ark Encounter became the latest big project of Answers in Genesis.

Mike Zovath (Senior VP of Answers in Genesis; head of the Creation Museum construction): While we were in the design phase of the Creation Museum, we realized that we were trying to build one of the largest structures mentioned in the Bible [the Ark] in a very small space in the museum. We realized that the Ark part of the museum was beginning to take on a life of its own. It was becoming a very popular exhibit for our first museum guests.

Q. How did you assemble the design team for the Creation Museum and the Ark Encounter?

Mike: We really didn’t know what we needed for a design team ten years ago. Just as God brought the animals to Noah in Genesis, He was faithful in bringing just the right talented team for the museum. And it started with Patrick Marsh.

Q. Patrick, share something about your extensive design background.

Patrick Marsh (chief designer of the Creation Museum and the Ark Encounter): I worked on the 1984 Olympic Games [in Los Angeles] and moved from there to New York to work on the Statue of Liberty celebration as an art director [1988]. I was then hired to work on the King Kong and Jaws attractions at the Universal Studios theme park in Florida.

I then went to Japan and worked as an art director on a lot of different theme park projects in Asia. While there [2001], a friend sent me a newspaper article about a museum that was going to be built in northern Kentucky—the Creation Museum. And I contacted Mike Zovath, we had an interview, and the rest is history.

Q. What will people see at the Ark?

Patrick: They’re going to see a biblically proportioned Ark. Wood inside and outside, with three floors. There will be exhibits with some animatronic animals, and some live animals as well.

We’ll answer two of the most-asked questions about the Ark: how did Noah and his family live on the Ark, and how did he take care of all the animals on board?

Q. Ken, how can people partner with the Ark Encounter?

Ken: We have a unique way for people to donate to this project—and to actually become a part of helping to rebuild the Ark. They can sponsor pegs, planks, and beams so that we can get this project underway.

For more information, go to ArkEncounter.com.