This is Ken Ham, co-author of the eye-opening book on Noah’s flood A Flood of Evidence. 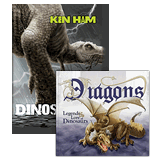 Dinosaurs. The word brings up images of huge beasts, volcanos, and an exotic lost world. But is that an accurate picture of these extinct reptiles?

Well, to properly understand anything, we must start with the Bible’s history. That foundational history explains the world around us—including, yes, dinosaurs.

Now, Adam and Eve were also created on day six. That means humans and dinosaurs lived at the same time!